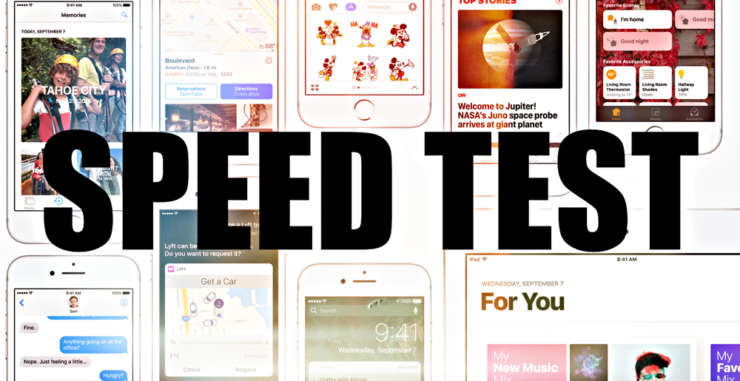 Apple released iOS 10.2 earlier this week and comes packed with a bunch of interesting features. While it may not be a groundbreaking release, but it packs some noticeable fixes and changes under the hood. But the big question in everyone's mind right now is: is Apple's latest firmware faster than its previous public release, iOS 10.1.1? iAppleBytes wanted an answer to that as well therefore he recorded a series of speed test videos on older iPhone models, namely: iPhone 5, iPhone 5s, iPhone 6 and iPhone 6s. The videos show the performance of Apple's latest firmware on these devices, giving you a good idea whether or not it's worth the upgrade.

As you can see from the above speed test videos, iOS 10.2 is slightly faster and responsive compared to iOS 10.1.1. From booting up to performing general everyday tasks, Cupertino's latest mobile firmware is definitely slightly snappier. And if you were waiting for iOS 10 to become more 'responsive,' then this update should push you to install the new firmware.

If you want the maximum performance benefit out of iOS 10.2, then I would highly recommend installing it via iTunes. I'm talking about performing a clean installation here, from scratch, then setting up your device as new. Before you take that route though, make sure you have backed up everything on iCloud or iTunes.

A fresh copy of any firmware is the way to go if you want everything to be as pristine as possible. Installing firmware over the air can land you into all sorts of dark patches, with quick battery drain being one of them. The final call whether or not you want to install iOS 10.2 is entirely yours. It's highly likely Apple's mobile firmware won't see further performance related improvements for at least a couple of months.

Before heading out, be sure to check out the following.