The SpaceX Falcon 9 before launch. SpaceX/YouTube

At 10:00 EST today Space Exploration Technologies Corp. (SpaceX) successfully launched its first satellite ridesharing mission of 2021. Dubbed as the Transporter-1, the mission took a staggering 143 small satellites to orbit, setting a new record in the process for the most satellites launched simultaneously. Propelling the Transporter-1 payload is SpaceX's Falcon 9 Block 5 B1058 booster, which is on its fifth flight and it is the same booster that carried the National Aeronautics and Space Administration's (NASA) astronauts Col. Robert Behnken and Douglas Hurley to the International Space Station (ISS) for the space agency's Dragon DM-2 mission that evaluated SpaceX's Crew Dragon capsule for future missions. 7:39

Today's launch came as SpaceX scrubbed its launch attempt yesterday due to surface electrical fields being unfavorable. While Andy Tran, production supervisor at SpaceX announced the abort six and a half minutes prior to liftoff, the Falcon 9 continued its propellant loading before flight controllers officially held the launch one minute before yesterday's liftoff time of 09:40 EST.

Onboard the Falcon 9 are payloads from Starlink, Kepler, NASA, Swarm Technologies, Spire Global and ICEYE. Several of these, including those from SpaceX, Kepler and Swarm are designed for communication, and the NASA payload is part of the agency's efforts to retain student interest in STEM (Science, Technology, Engineering & Mathematics) fields.

SpaceX's ridesharing missions allow the company to successfully leverage its rapid reuse and launch capabilities to not only expand the scope of the astronautic industry as a whole but also to generate much-needed revenue for future projects. As the Falcon roars to the sky from the United States Space Force's Cape Canaveral Space Force Base in Florida, the Hawthorne, California-based launch services provider already has its eyes set on the future through the Starship launch vehicle platform.

SpaceX is testing the upper stage spacecraft/payload fairing in its facilities in Boca Chica, Texas, with its chief executive officer Mr. Elon Musk also moving to the state. SpaceX successfully tested the Starship SN8 booster prototype in December, and it is currently finetuning its successor, SN9 after the latter faced an unfortunate accident soon after its predecessor's test flight. 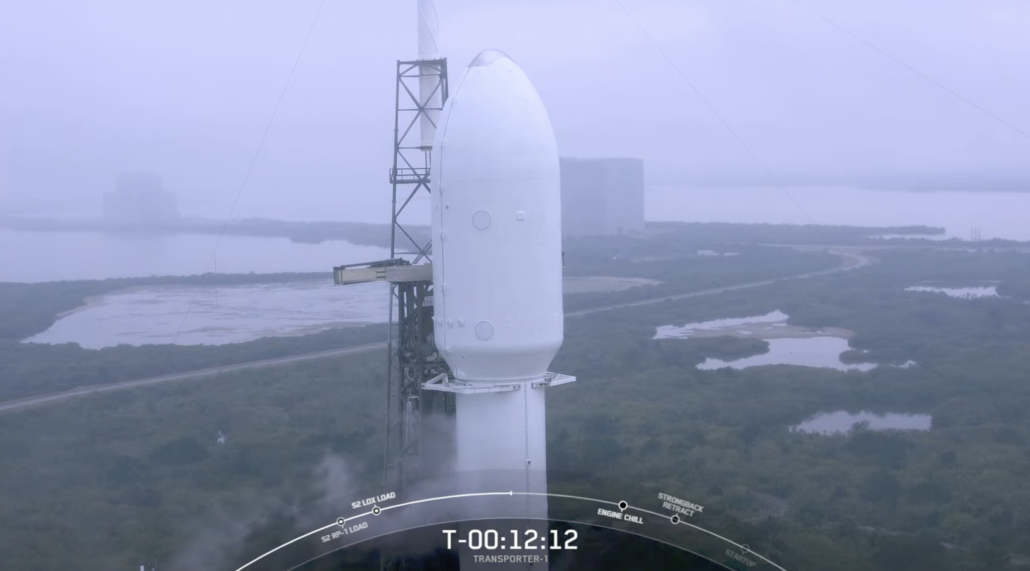 The Transporter-1 mission in Florida before launch yesterday. Image: SpaceX/YouTube

Roughly three minutes after liftoff, the Falcon 9's payload fairing (pictured above) will separate from the first stage booster to start the next stage of its journey. As opposed to the booster, which is nearly fully reusable, the second stage for every flight is brand new. This is a big contributing factor to SpaceX's overall launch costs as the company has to manufacture new equipment for each successive launch. However, keeping true to its mantra of reusability, SpaceX also reuses the second stage payload fairing, with this reuse having saved the company $30 million last year.

The ten Starlink satellites onboard the Falcon 9 are different from SpaceX's usual payload of launches. These have been specially approved by the Federal Communications Commission (FCC) to deploy under revised parameters under SpaceX's third modification request for Starlink. This request asks the Commission to allow the company to lower its satellite altitude, among other parameters, to improve coverage and make the spacecraft safer.

This request has come under fire by Starlink's competitors including Amazon's satellite internet arm Kuiper and Kepler. Amazon believes that the changes will affect its own internet satellites and networks once both have been fully deployed - an assertion that SpaceX has rejected by stating that it uses incomplete facts to reach this conclusion.