After its autonomous system aborted the Starship SN8 prototype's launch yesterday, SpaceX managed to successfully lift the vehicle off of the ground, restart its engine midflight and operate its control surfaces today. The SN8 prototype's flight marks the first time that the company has attempted a high-altitude hop for a vehicle that aims to cover a variety of missions - from lunar landings, satellite deployments to Mars landings. Today's test prototype is different from the one that SpaceX will use for NASA's Human Landing System (HLS), as it uses different engines and aerodynamic structures - both of which were key testing points that SpaceX evaluated today.

A little over two minutes prior to SpaceX's scheduled lift-off time of 16:00 EST, mission control for the SN8 test flight called off the test with the prototype starting to vent its fuel soon afterward. However, as opposed to yesterday's abort, which resulted in the attempt being scrubbed partly due to the fact that SpaceX's allotted time frame for the mission having elapsed, the company confirmed that a new time would be set soon.

Given that the hold took place not before or at one minute prior to liftoff when the aforementioned autonomous mission takes off, it was clear that the delay was manual. Observers pointed out that a potential range violation might have been the reason behind this since an aircraft took off in the vicinity - an occurrence that might have created safety concerns for the 12.5-kilometer test flight.

Today-s test came after the company conducted two successful low altitude flights of its prototypes throughout this year, with today's flight attempt being the first time that a prototype featured three Raptor engines, a forward nosecone and forward and aft flaps. SpaceX's intended objectives for the test were to evaluate these control structures and the propellant switch from Starship's primary to secondary fuel tanks as the vehicle's engines reignite for relanding after the vehicle reaches its intended altitude.

This altitude is higher than what most commercial airlines fly at, and SpaceX also intends to use Starship as a commercial transport system here on Earth, in addition to the multitude of other mission goals for the launch system.

Prior to the test, SpaceX chief and lead engineer Elon Musk cautioned about optimistic expectations from the test, as he stated that according to him, the test had a one-in-three chance of succeeding.

After the hold, SpaceX set the new time for liftoff at 17:40 EST as it began to fill up SN8 with its liquid oxygen combustor and methane fuel once again. The variant tested today featured three Raptor engines, three less than the full complement of six that SpaceX had listed previously on its website, with upgrades to the site now not mentioning the number of engines for either the upper stage Starship or the lower stage Super Heavy booster. 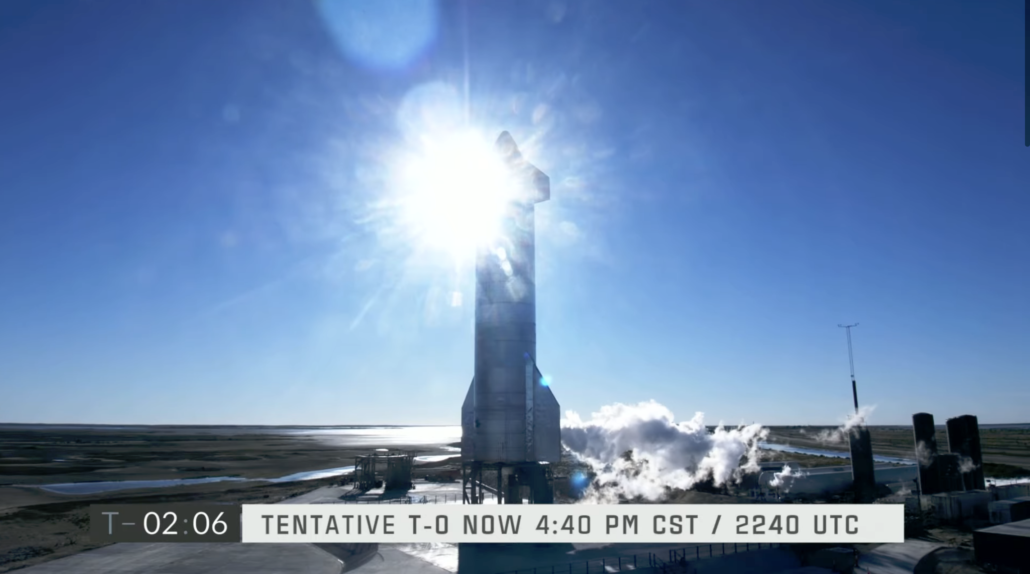 The Starship SN8 prototype venting gaseous Oxygen as it re-prepares for its flight after a hold earlier. Image: SpaceX

Seven minutes prior to liftoff mission controllers confirmed that the maritime zone was clear for a launch, which was another requirement due to the potential of accidents.

This time around, SpaceX got all the variables for its test right as Starship SN8 lifted off perfectly at its stated time and cruised into the Texas sky. Roughly a minute and forty-four seconds into the flight, one of the three Raptor engines shut off with a fire in the engine area. However, following that, Starship continued its ascent until all three of the Raptor engines shut off and the vehicle became horizontal to test its control surfaces.

Following this, the vehicle validated another key testing criteria when it successfully reignited all three Raptor engines to demonstrate the key propellant tank transition. However, the ending of the test came as expected, with SpaceX being unable to vertically land the vehicle - a key criterion for NASA's HLS contract but one that will take more time for the company to develop. Finally, as the SN8 burned, SpaceX also lost three of its previous Raptor engines -  a fact that will be on the company's mind as it contemplates future tests.

In a tweet, Mr. Musk congratulated his team on the successful test and explained the reason behind the crash. According to him: