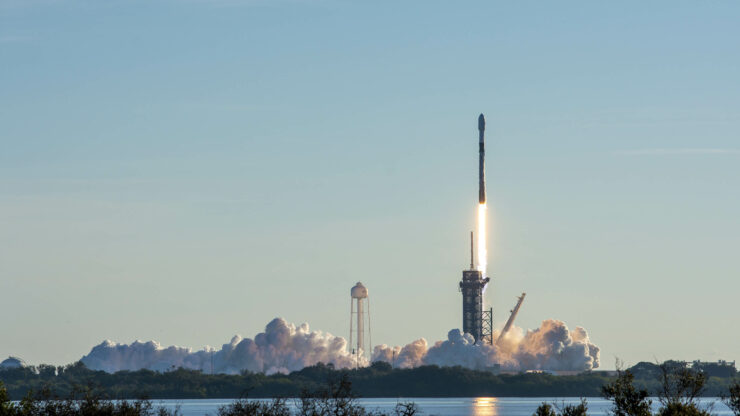 Space Exploration Technologies Corp. (SpaceX) has refuted Amazon subsidiary Kuiper LLC's multiple assertions that changes to the former's Starlink constellation of internet satellites would cause interference to the latter's spacecraft once they are operational and in orbit. Representatives of SpaceX had a conference call with members of the Federal Communications Commission's (FCC) International Bureau to discuss the Starlink modification request currently pending before the regulatory body, and during the call, the SpaceX team reiterated its hard-hitting rhetoric against competitors.

During their call, the company representatives focused primarily on countering Amazon's detailed claims of interference to its Kuiper constellation of internet satellites from the proposed altitude and orbital changes to Starlink. These changes, Amazon has alleged, will make it significantly difficult for it to communicate with its satellites via ground stations as the number of satellites that will be visible in the sky will grow should the modification take effect.

Additionally, in its discussions with the FCC in November last year, Amazon had also stated before the Commission that SpaceX's proposed modification will end up increasing interference events with its service, make SpaceX more vulnerable to uplink and downlink interference from Kuiper, increase the number of Starlinks visible in Kuiper's orbital shells and reduce the operational freedom that Amazon's satellite Earth stations would have owing to the changed Starlink beam contours following the modification. 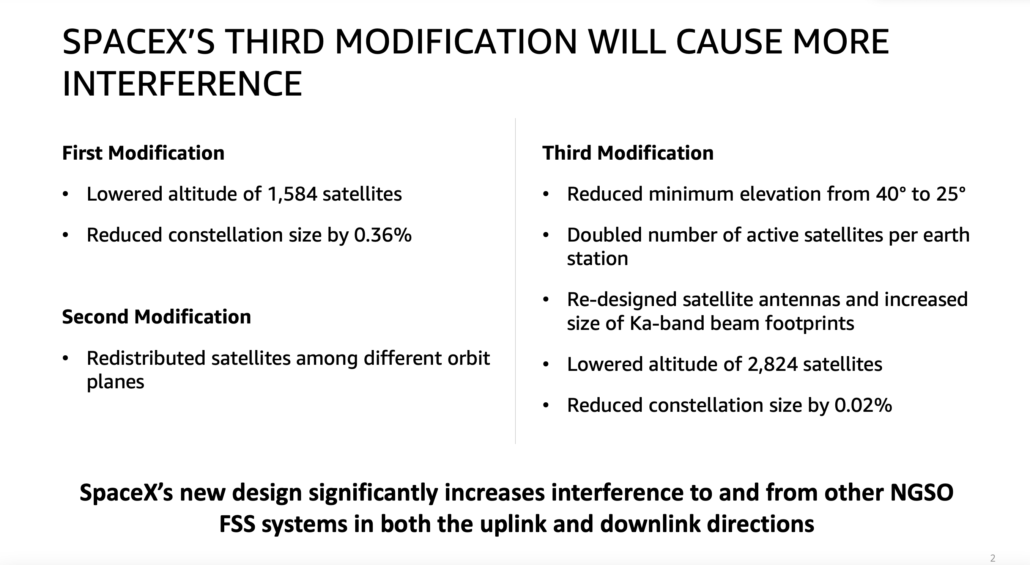 In its latest presentation, SpaceX categorically denies Amazon and other operators' claims that its proposed modification will increase interference events. It states that the three main parameters of the upgrade, lower altitudes, downlink power and minimum elevation levels, will work together to ensure that interference levels remain similar to those before the modification - a claim that the company has also made in the past to counter Amazon's belief of increasing interference.

However, this time around, SpaceX has also responded to Amazon's concerns point-by-point. Its presentation made last week states that by "cherry-picking" data, Amazon is misstating the fact that a larger number of Starlinks will be in the orbital shells of its Kuiper satellites. To counter these concerns, SpaceX states that when Earth station elevation angle and satellite altitude are reduced together, the number of satellites visible in an orbital shell goes down. And since the number of satellites determines the number of interference events, by extension these are reduced as well 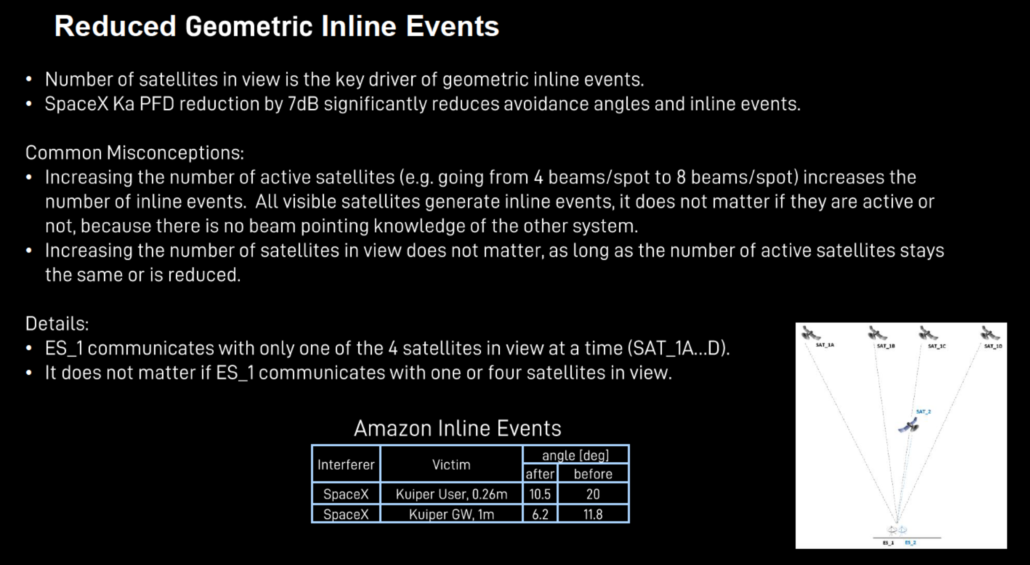 In its presentation, SpaceX has also refuted a misconception that the primary determinant of inline events is active satellites as opposed to all satellites in view. Image: SpaceX Starlink Modification presentation January 2021 filed 19 January, 2021, in FCC International Bureau File Number: SATMOD2020041700037.

It then proceeds to beef up its argument by reiterating an earlier claim that when determining interference, the total number of satellites in view is the primary factor that needs to be taken into consideration. Amazon has stated to the Commission that the proposed Starlink modification will increase the number of active satellites in view and therefore drive up the number of interference events by a staggering 250%. In an earlier petition requesting the FCC to deny SpaceX's modification request, the company has also stated that SpaceX's claim that only the total number of satellites in view (as opposed to only active satellites) be used for interference analysis is self-contradictory to its own analysis methods.

SpaceX reiterates this position by stating that the number of active satellites in view does not determine interference since they are not actively steering their beams away from a competing system for interference reduction. Finally, the Starlink maker shows that its calculations reveal that post-modification, interference to Kuiper Earth stations and users will drop by 47% and 47.5% respectively.

Following this rebuttal, SpaceX then outlines to the Commission that Amazon's belief that expanded beam contours are the sole determinant for ground station performance ignores the actual power levels that are available on the ground. Amazon, as shown above, has claimed that the Starlink modification will make ground station colocation (sharing the same space) ineffective, and also make placing Kuiper stations free from Starlink's footprint difficult, if not impossible to achieve.

SpaceX then states that as opposed to what Amazon's comments insinuate, the actual PFD (power flux density) on the ground will result in a higher interference to Starlink from Kuiper than the other way around. The reasons behind this are the facts that Amazon's satellites will access lower elevation angles and have a higher altitude, believes SpaceX. Yet, the company also seemingly conceded that its PFD levels are slightly higher than Amazon's, as shown in the first image above. 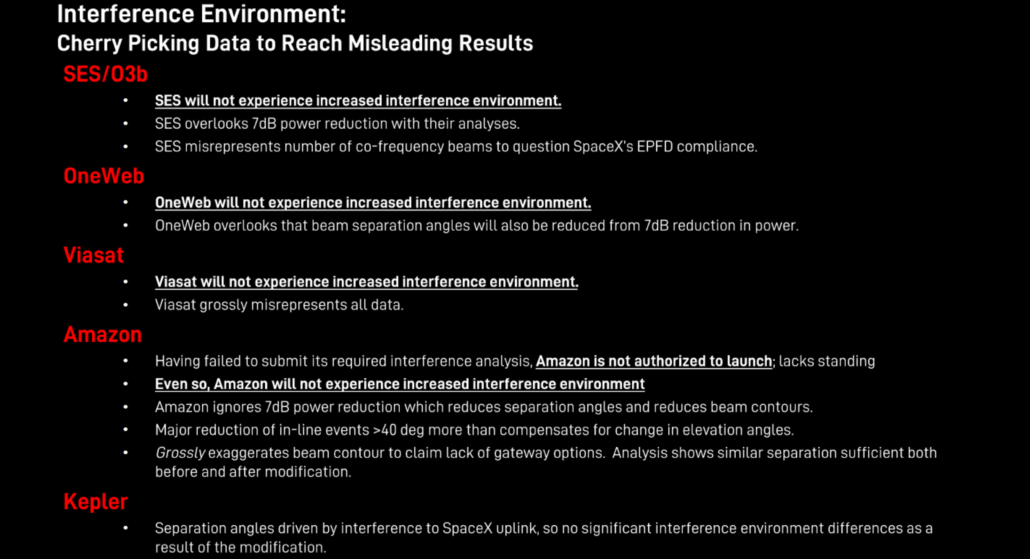 In Sweeping Statements, SpaceX Rejects All Competitor Claims About Interference From Starlink Modification

Finally, in a blanket counter to all of its opponents' claims, SpaceX states that services provided by SES, Viasat, OneWeb and Amazon will not face interference from Starlink should the modification be approved. Out of these four, three have failed to include a reduced downlink PFD of 7db. As a result, they do not factor in the reduced satellite beam contours and separation angles in their analyses - and subsequently continue to believe that the potential for significant interference exists.

Most damming is SpaceX's criticism of Amazon (no surprises), who SpaceX highlights is not authorized to launch any satellites so far due to it not having submitted any interference analysis of its own. As it continues to build the Starlink internet constellation, with the first launch of 2021 having taken place yesterday, SpaceX continues to press the FCC to grant its modification request - a request that is influenced by the Commission's 2019 conclusion that a reduction in altitude would enable SpaceX to more efficiently use the spectrum that it has been granted for its satellite internet constellation.

The FCC also partially granted SpaceX's third modification request earlier this month, allowing the company to deploy ten satellites into polar orbit on top of its Transporter-1 ride-sharing mission tomorrow, with a schoolteacher from Alaska also lambasting Amazon for its opposition to the Starlink modification.