The bottom of SpaceX's Starship booster is visible with all its engines. Image: SpaceX

Space Exploration Technologies Corporation (SpaceX) chief Mr. Elon Musk delivered a highly anticipated presentation for the company's Starship next-generation launch vehicle platform at the company's development facilities in Boca Chica, Texas. The presentation was given alongside the fully stacked Starship standing in the background after SpaceX stacked the rocket's upper stage on its lower stage through a staggeringly tall launch and life tower yesterday. At the event and the question-answer session, Musk shared updates on SpaceX's progress with Starship, potential future customers, plans for point-to-point flights on Earth and the development of new engines with a host of upgrades.

Musk kicked off the event by highlighting that his primary objective for building what will be the world's largest rocket when and if it becomes operational is to provide "insurance" for life on Earth alongside exploring other planets.

He then proceeded to share that with Starship SpaceX will use all parts of its rocket, which includes the upper stage. Starship will also be a rapidly reusable platform, with Musk describing that his company plans to reuse the vehicle is designed to be reused within hours of landing back after launch. 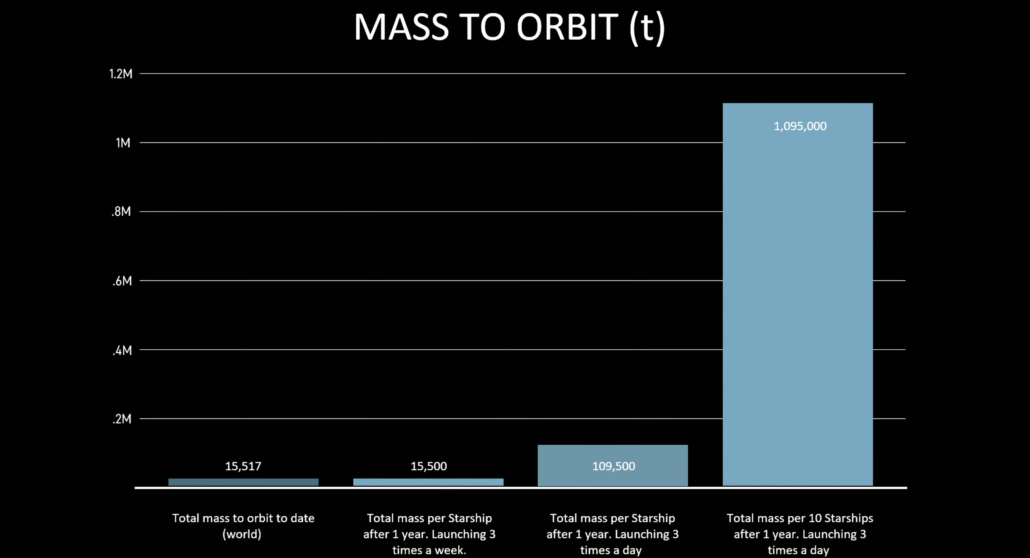 A SpaceX slide describing the tonnage to orbit based on various Starship launch scenarios. Image: SpaceX/YouTube

Talking about the mass to orbit, Starship's planned rapid launch cadence, reusability and the mass required to develop a self-sustaining city on Mars, executive outlined that:

So the total mass to orbit to date of Earth is around 15,000 tons, 15, 16 thousand tons. And, the mass per Starship after a year, just one year of launching, if it launches three times a day, would be equal to all the mass to orbit of Earth to date. That's just one Starship launching three times a day for a year. Now if you have ten Starships-ish [laughs], then, and we'll have more than that. Our goal is to be making at least a. . a one stack per month. And then ultimately, potentially a ship every three days. There'll be more ships than there are boosters, because the booster actually, even though it's gigantic, will come back in about six minutes. Excitement guaranteed.

So it only takes about two minutes on ascent and then about four minutes to return. You'll know soon. The ship has to complete at least one orbit around Earth and sometimes maybe even three orbits or more and each orbit is 90 minutes. So the ship is probably, you know, reusable about every six to eight hours, that's probably say at least three times a day for the ship. And in theory the booster is capable of being reused every three hours. So the propellant pumps are designed to fill the rocket in about half an hour. So this really is designed for rapid reusability.

If you can do roughly a million tons to Earth orbit that's comfortably over a hundred thousand tons to the surface of Mars. Maybe a hundred and fifty thousand tons depending on how good the landing system is. So you can only go to Mars every two years, uh so, uh, and. . .and I think roughly you need about a million tons on Mars to have a self-sustaining city. The critical threshold, I think for Mars is to, uh have a city that is self-sustaining. It's gonna be incredibly difficult to make it a self-sustaining city, because if it's missing any ingredient at all, however minor that ingredient is, then if the ships from Earth stop coming for any reason, the city will die out. So the critical threshold to pass one of the most important great filters for any species is to have, have, the..the other planet no longer dependant on the original planet. I don't know exactly what that tonnage is but I suspect it is at least if one tries to get the right order of magnitude, about a million tons. Hopefully it's not more than that. Starship is capable of doing that.

Musk then proceeded to share a couple of details for the upper and lower stages, their engines and the heatshield. The heat shield is the "world's largest" according to him, and it uses techniques similar to making roofing tiles during manufacturing, making it cost-efficient. Orbital refilling is will also take place in Earth orbit, and he was confident about SpaceX executing this capability due to the company's experience with the Dragon spacecraft.

Speaking of the number of engines, the first stage booster will use 33 engines, which is the most which can be fit in it. The second stage currently uses three Raptor sea-level and 3 Raptor vacuum level engines, and SpaceX might add three more in the future. Delving deeper into the Raptor engines, Musk confirmed that the second-generation Raptor is capable of successfully generating 230 tons of thrust to mark for a 25% thrust increase despite being more simplified, more robust and costing roughly half as much as the original Raptor. Additionally, he also shared that the peak thrust generated by the Raptor 2 is 247 tons and further improvements might enable it to touch 250 tons.

During the proceeding question session with members of the press, Musk reiterated that SpaceX plans to produce at least one Raptor engine daily. Point-to-point travel on EArth will be suitable for long-distance flights and might also help SpaceX develop a rapid launch cadence that is necessary to bring down the marginal costs of flying Starship. He remained optimistic that costs will improve over time, as more flights take place and reusability is flight-proven.

The marginal costs could be "as low as a million dollars per flight" according to Musk, and a higher launch rate will enable easier recovery of the fixed costs. Additionally, after a couple of years, the total cost of launching 100 tons to orbits higher than low Earth orbit (LEO) could be lower than $10 million, he outlined.

Additionally, orbital refilling, which is crucial for the National Aeronautics and Space Administration's (NASA) plans to land humans on the Moon, will be demonstrated by late next year stated an optimistic Musk.

About Raptor 2, he explained that components such as its turbomachinery, combustion chamber, nozzle and electronics have been upgraded. For the machinery, the rotating components are stronger and pipes inside are welded to each other instead of being connected through flanges. Furthermore, he also revealed that the Raptor 2 has a chamber pressure of 330 bar, which Musk believes can be sustained.

Finally, melting the combustion chamber of the Raptor 2 is the biggest problem facing SpaceX right now, the company is experimenting with different cooling approaches to stop this from happening. The company has also tested several engines for at least 700 seconds with multiple starts.

To learn more about the SpaceX Starship, take a look at: