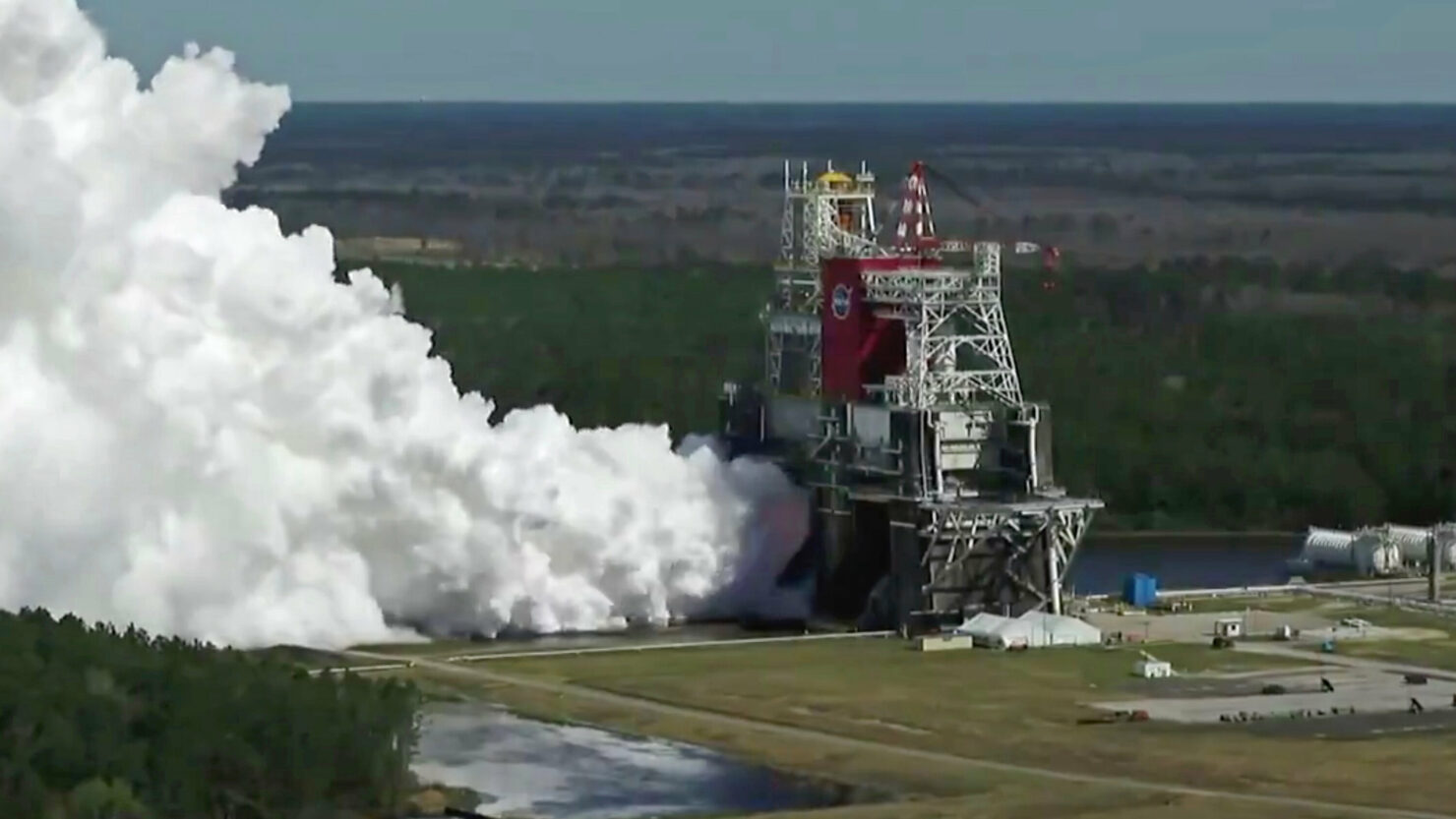 The National Aeronautics and Space Administration (NASA) testing its RS-25 engines for the Space Launch System (SLS) in March this year. The SLS will form the backbone of the agency's Artemis program and take astronauts onboard the Orion spacecraft to a lunar space station from which they will board a Space Exploration Technology Corp.'s (SpaceX) Starship lunar lander to make it to the Moon's surface. Image: NASA TV

The National Aeronautics and Space Administration (NASA) awarded a $2.9 billion contract to Space Exploration Technologies Corp. (SpaceX) yesterday for the second phase of the agency's plan to develop a lunar lander. This lander will form the backbone of NASA's Artemis program, which seeks to return humans to the Moon, and SpaceX bid its Starship spacecraft for the proposal.

Following the award, NASA shared its Source Selection Statement highlighting the rationale behind its decision. NASA's associate administrator human exploration and operations mission directorate (HEOMD), Ms. Kathryn Leuders evaluated the award proposals for HLS. In the statement, she has highlighted the reasons behind the decision to move forward with SpaceX for the second stage of the contract, which requires the company to demonstrate crewed and uncrewed landings on the lunar South Pole.

NASA evaluated the second-phase proposals submitted for the Human Landing System (HLS), the agency's official name for the lunar lander, by SpaceX, Blue Origin and Dynetics according to three criteria. These considered their design, price and management merits, and the big reveal in the selection statement is SpaceX being able to secure an 'Outstanding' rating for its management capability.

In the previous evaluation for the first-phase proposals NASA had deemed this capability as being merely 'Acceptable.' However, in a surprising turn of events that catapulted SpaceX right at the top of the Management food chain, the company received the highest rating for this factor in the selection statement approved by Ms. Leuders yesterday.

The primary factors behind NASA's rating upgrade took into account SpaceX's success with its missions to the International Space Station (ISS), its decision to allow full NASA insight into Starship development and the choice to fund the bulk of Starship development costs.

Specifically, SpaceX's plan to "replicate and utilize management processes, toolsets, and software that have been effectively employed on other, similar programs" will allow NASA to accurately track HLS development progress. Problems with the agency being able to track development have caused problems with its Space Launch System (SLS) program, and SpaceX leveraged its operational culture to convince NASA for a rating upgrade.

Similarly, SpaceX has also agreed to let NASA monitor the development of the Starship program as a whole. While the Starship lunar lander will use the platform's upper stage, certain design features such as aerodynamic surfaces (wings), engines, solar panels and landing legs will differ between the two. Importantly, the lunar lander will use Starship's first stage Super Heavy booster and tanker spacecraft for refueling, and the insight offered wooed NASA since "SpaceX’s HLS effort and its development of commercial spaceflight capabilities are inextricably intertwined" according to associate administrator Leuders.

Two of these three factors (Stars funding and ISS mission experience) were favorably viewed by NASA in last year's evaluation. However, back then, the agency had also cited previous Crew Dragon and Falcon Heavy development delays as raising risks for the lunar program. Now, it seems as if by providing NASA with greater insight into the Starship program, SpaceX has won over the agency's confidence for these risks.

A rapid test cadence in Boca Chica, Texas, has bolstered confidence in the program, as SpaceX tested its first Starship prototype, SN8, a little over 24 hours after it submitted the final HLS proposal to NASA.

These benefits were absent from Blue Origin and Dynetics' assessments. The former's decision to work with Lockheed Martin Corporation and Northrop Grumman for its Integrated Landing Vehicle was viewed favorably by NASA. Still, its inability to satisfy the agency for data sharing and intellectual property infringement was viewed unfavorably. The latter's plans for commercialization secured NASA's approval but its inability to schedule risk mitigation was a source of worry for the space agency. 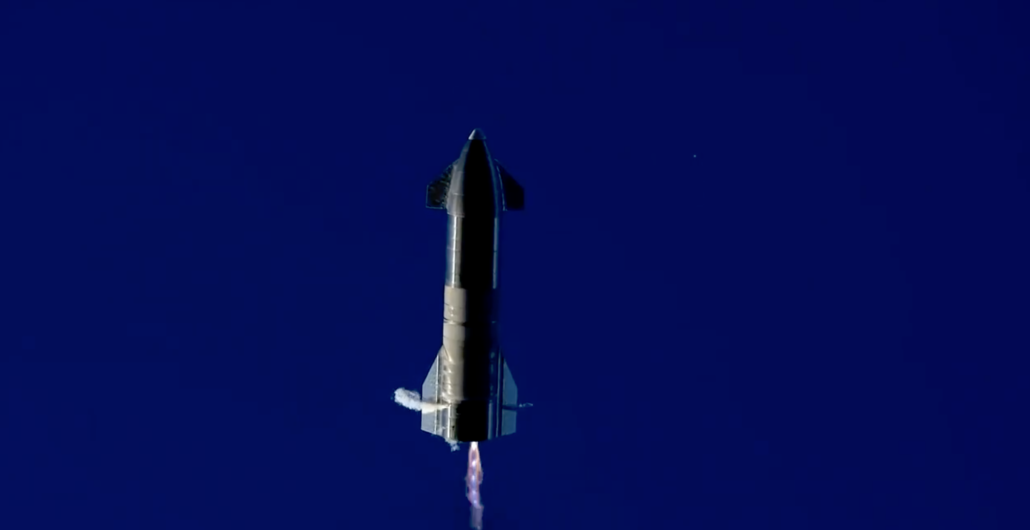 The Starship SN8 prototype during landing as one of its engines reignites. Re-ignition was a key non-NASA testing parameter that was successfully met during the prototype's test in December last year. Image: SpaceX/Twitter

For its technical evaluation, NASA assigned Blue Origin and SpaceX an 'Acceptable' rating and Dynetics a 'Marginal' rating. SpaceX and Blue Origin retained this rating over the previous assessment, but surprisingly, Dynetics fell from 'Very Good' to Acceptable.

Starship impressed NASA with its cargo volume, its support for more extravehicular (EVA) missions than the proposal required, interior design for efficient cargo space allocation, the ability to loiter in lunar orbit for 100 days, redundant airlocks with separate life support and environmental support systems and excess propellant for emergencies and consumables.

The vehicle's design similarities to the Crew Dragon and SpaceX's plan to allow Starship to support four crewmembers independently and an aggressive testing cadence, also won NASA's favor in the technical evaluation.

However, just as it had in the previous statement, the agency cited its doubts about SpaceX's plan to refuel Starship in Earth orbit before its lunar foray and its propulsion system design. Yet, since the refueling will take place in Earth orbit, NASA also believes that its threat to the mission is reduced. SpaceX allayed the agency's concerns for the propulsion system development by providing a detailed development schedule, something absent from the other proposals. Furthermore, since NASA's crewed Orion launches will occur after Starship has departed, the agency believes it will have leeway to accommodate any mission delays due to the in-orbit refueling. 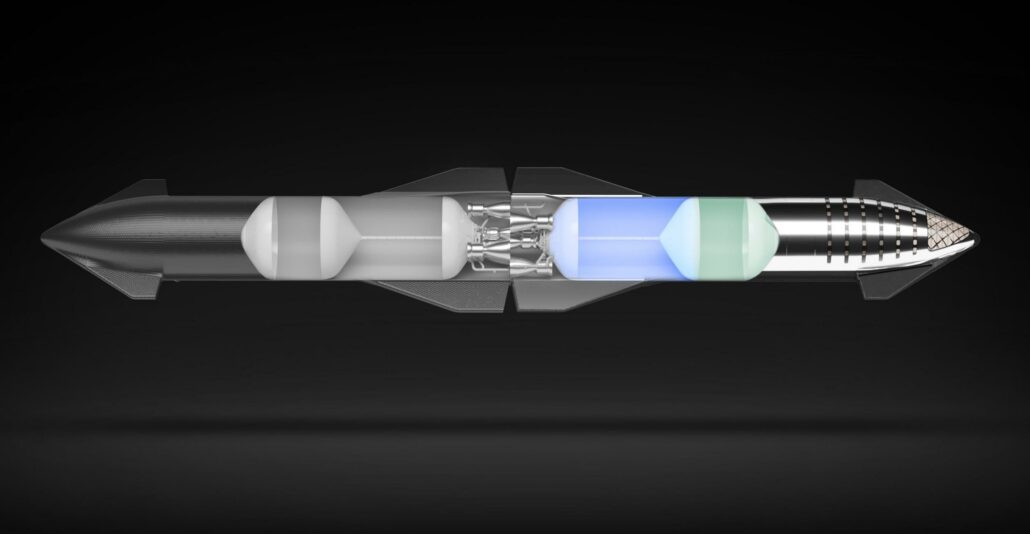 A SpaceX presentation slide from 2019 demonstrating in-orbit Starship refueling. The spacecraft on the right is the standard Starship variant, different from the company's Human Landing System proposal. Image: SpaceX

Blue Origin also exceeded NASA's requirements for EVAs and the ILV is also capable of loitering in the lunar orbit. The company's focus on crew safety, a theme present in its other vehicles and impressed NASA, and the ILV's ability to separate its descent element from the ascent element is a crucial safety factor that won the agency's approval. The ILV comprises of three elements, the ascent, descent and transfer elements, and the ascent element is the one that houses its crew.

The biggest weakness of the Kent, Washington-based company, however, was its supply chain management. It will procure components of the ILV's propulsion system with long lead times from a third-party supplier, and Blue was unable to schedule their certification and validation to meet its propulsion critical design review later this year, according to NASA. Additionally, the fact that Blue will not test critical propulsion systems until 2024, which is when the first HLS mission is set to take, created doubt in the agency's mind as to whether it will be able to meet the contract timeline requirements.

Another significant weakness identified by NASA was that four of the six ILV communication links, such as those to Earth and to Orion, were not 'closed.' A closed link uses sender feedback to assure the receiver about message integrity.

As the associate administrator noted:

Blue Origin’s communications link errors would result in an overall lack of ability to engage in critical communications between HLS and Orion or Earth during lunar surface operations. I am troubled by the risks this aspect of Blue Origin’s proposal creates to the crew and to the mission overall. 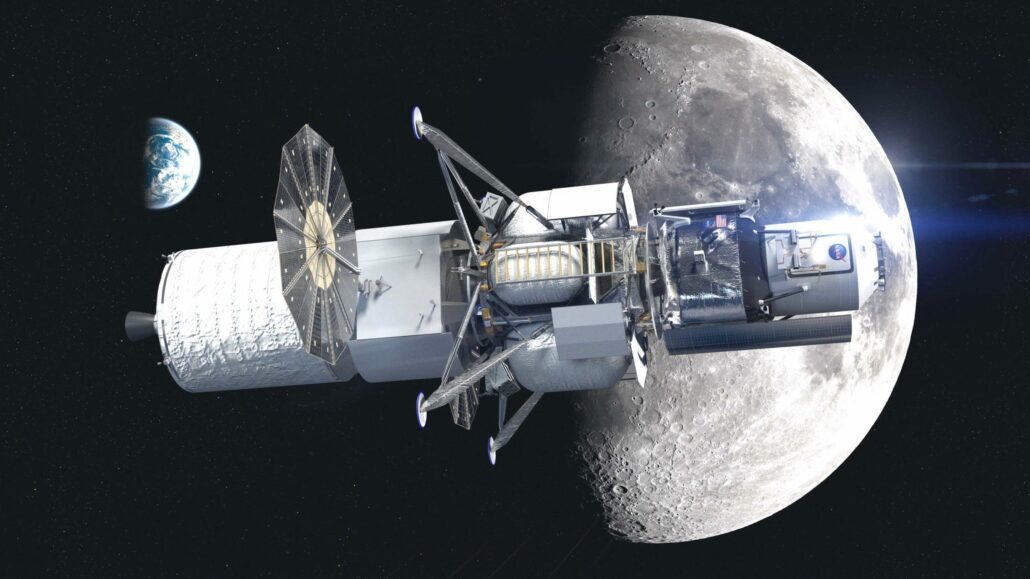 A render of the Integrated Landing Vehicle (ILV) in lunar orbit. The transfer, descent and ascent elements are visible from left to right. According to Blue Origin's proposal, the three elements will launch separately from Earth and assemble themselves in lunar orbit. Image: Blue Origin

Yet, the proposal's disqualifying weakness was not its technical or management weaknesses. After all, NASA rated Blue's management strengths and its "thoughtful" organization structure as  significant strengths; The agency was impressed by the company forming 'badgeless' teams with representatives from the three ILV program members to manage the overall system, stating that these "types of badgeless environments constitute a true organizational partnership across Blue Origin and its major subcontractors."

According to NASA, Blue Origin's proposal was ineligible for the contract award since the company requested advance milestone payments against the contract instructions. Ms. Leuders explained that due to these payments, an award would be impossible unless NASA negotiated with Blue to allow the company to revise its proposal to meet the HLS solicitation requirements.

She also stated in a footnote that she would be willing to negotiate with the company if its proposal was beneficial to the government.

Her precise words are as follows:

While it is also the case that Blue Origin’s proposal is not awardable as-is in light of its aforementioned advance payments, this is an issue I would endeavor to allow Blue to correct through negotiations or discussions if I otherwise concluded that its proposal presents a good value to the Government. This, however, is not my conclusion.

However, since SpaceX had already won nearly all of NASA's funds for the HLS, the agency decided not to pursue further negotiations with Blue Origin. Leuders also wrote that following the SpaceX award, the remaining funds are so low that her agency "cannot reasonably ask Blue Origin to lower its price for the scope of work it has proposed to a figure that would potentially enable NASA to afford making a contract award to Blue Origin."