Sunlight acts as an abundant resource of solar energy and we can get a lot of benefits from it. After looking at different technologies used in industrial applications working amazingly one after another, if we wish we can make the use of small scale personal technology more environmentally friendly and a lot more simpler just by acquiring the right kinds of consumer friendly solar chargers. Solar Paper, by YOLK, claims itself to be the lightest and thinnest solar charger present in the world. The charger is so thin that it can also be used as a bookmark. With every single solar sheet it measures 1.5 mm in thickness along the length of the panel. 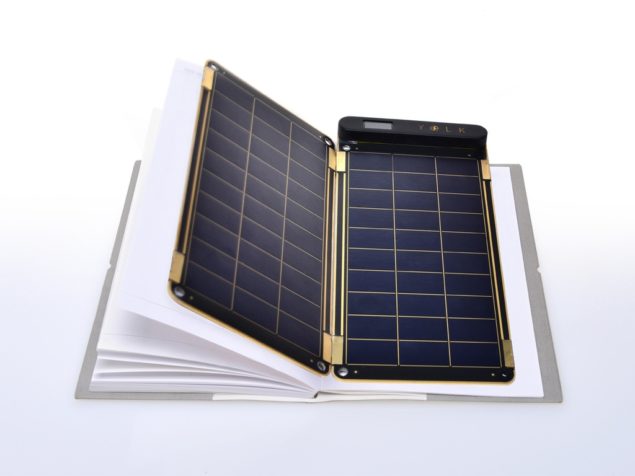 This could pave way for a lot more advanced solar technology

The Chicago based startup named YOLK are the ones that came up with this idea and they also have a top end design. The top end design features an LCD telling you the amount of charge being generated and it also has a USB port, it is obviously a little bit thicker at 1.1cm along the length of the panel, but it still looks slim. You can even cling it to your backup whenever you’re out in the sun that way you’ll store up some charge that can be used later, the panel weighs about 120 grams so it won’t be much of a burden.

The panel has a size similar to the iPhone 6 Plus or slightly larger than the average Phablet, it measures 19cm long and 9cm wide. While talking about smartphones, YOLK claimed that iPhone 6 can be charged by Solar Paper in about 2.5 hours (which is great for a solar charger). The best thing about the Solar Paper charger is that it uses embedded magnets so that, depending on the thing you want to charge, you can add extra panels.  Each panel is of 2.5W and you can add up to 4 panels giving a total charge of 10W, you can choose between 2.5W, 5W, 7.5W and 10W.

The Solar charger still has 34 more days of funding left from Kickstarter, the team has already beaten then original funding goal of US$50,000 by quite a margin. They’ve made around US$220,000 in pledges and now the solar charger will go into production once the funding round finished. The first batch is going to be shipped in September according to YOLK.

So if you’re on the market searching for a solar charger look no further, this paper thin charger is available at a price of US$69 for the basic model with two 2.5W panels, and just by adding a few more buck you can get the three of four panel models.