Samsung's Galaxy S6 Duo featured several design overhauls on board, making it one of the most popular flagship smartphones the company has launched. But apart from an entirely new look, combined with a unique edge display, the real strength of the Galaxy S6 duo series lay in the processor under the devices' hood. The 14nm Exynos 7420 is undoubtedly one of the best processors to hit the market in recent times, so a comparison of Samsung's octa core beast with a variety of devices will let you know how powerful it really is. And that's exactly what we have for you today in the form of an inforgraphic from folks over at Experts Exchange, that compares the Galaxy S6 with a PlayStation 2, amongst other things. 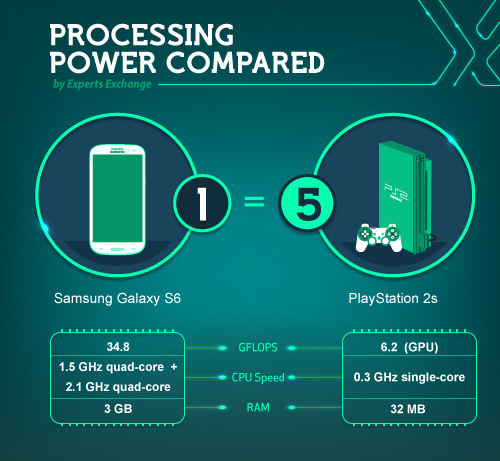 Well, well, well. Seems like things have started to become really advanced when it comes to Samsung's Galaxy S6 duo. According to an infographic, when compared in terms of raw processing power, the Galaxy S6 will equal five PlayStation 2s. The device's quad core CPU is able to generate 5 and 7 times the power the PlayStation's R5900 can generate at 299 MHz. In terms of RAM, the Galaxy S6 Duo carries a massive 3 GB of memory.

When compared in terms of Floating Point Operations per second, we see the Galaxy S6 manage 35 GFLOPS, which is absolutely massive when compared to the PlayStation. Ofcourse Sony's managed to significantly up its game since with the PlayStation 4's AMD APU, but still, all that power in a handheld speaks volumes about the rate at which technology is progressing. But in case you still want to know just how powerful the Galaxy S6 is, we've also manage to uncover an infographic that compares the device with supercomputers that start from IBM's 704, the first mass produced computer. Oh and if ou look over at the bottom, you'll see that Apple's Apple Watch equals two iPhone 4s. A good job by Apple as well. So take a look at the infographic below, and let us know what you think in the comments section.