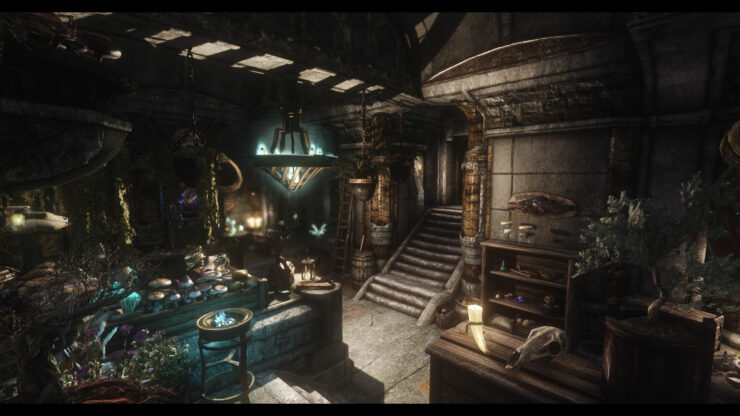 A new The Elder Scrolls V: Skyrim Shop Overhaul mod has been released, which greatly increases the shopping immersion within the game.

Called “JK's The Hag's Cure”, this building overhaul modification has been created by modder ‘Jkrojmal’ for the game’s Special Edition. It’s a lore-friendly enhanced shop overhaul of Markarth's The Hag's Cure, which doesn’t count towards the game’s ESP limit of maximum plugins.

Down below you’ll find some screenshots of the shop overhaul mod in action:

The “JK's The Hag's Cure” mod for The Elder Scrolls V: Skyrim Special Edition can be downloaded via Nexusmods.

The Elder Scrolls V: Skyrim is available globally now across PC and consoles (including Nintendo Switch). The RPG from Bethesda was originally released back in 2011. As announced last month, to celebrate the game’s 10th anniversary, Bethesda will be releasing a 10th-anniversary edition of the title for PlayStation 5, Xbox Series, PlayStation 4, Xbox One, and PC on November 11th.

Finally, we have some exciting announcements for the game itself. Current and future owners of The Elder Scrolls V: Skyrim Special Edition on any platform including Xbox Game Pass Subscribers will receive access to three free pieces of Creation Club content: Fishing, Survival Mode and even new quests with Saints and Seducers. Additionally, Skyrim Special Edition owners on PlayStation 5 and Xbox Series X | S, as well as Xbox Game Pass subscribers on Xbox Series X|S will receive a free upgrade to an enhanced version on November 11 for their respective PlayStation 5 and Xbox Series X | S systems!

We’re also excited to announce the most definitive version of Skyrim to date: The Elder Scrolls V: Skyrim Anniversary Edition. The Anniversary Edition includes Skyrim Special Edition and 74 creations, all 48 currently available and 26 to be released. These showcase over 500+ individual elements such as quests, items, armor, houses, etc.