Moving beyond social, screen and search, the virtual assistants are a new gateway to the web and all the people directly or indirectly associated with it. We can see the trajectory and route where it’s headed, from wearable to hearable and what’s next? Implants? To be more precise, these virtual assistants aid us in our everyday life and provide best possible solutions at a given time. So, we held a test to see which virtual assistant has the best voice recognition and response. 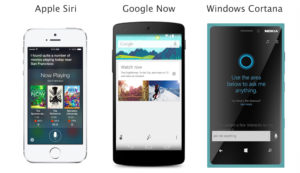 According to the test conducted between three major voice activated virtual assistants, we found that Siri has delivered more accurate results than its competitors. The test was held to find the best alternative for most accurate answers from 18 questions asked in English, French, Italian, Mandarin and German. The quickest answer would be awarded with a score of 1.0; the delayed and search result answer would be given a score of 0.5 and irrelevant answers would end up with a 0 score. Let the test begin!

Statistics – Which Beats Who!

All of the voice activated virtual assistants scored well in English, a little over and under. Siri topped the score with 14.5 out of 18, Cortana came second with a 12.5 and Google Now had the least score of 11.5. Siri illustrated positive results when it came to Italian where Cortana and Google Now gave reasonable results. While all of the other languages had the same result for Cortana and Google Now, Siri showed some impressive numbers in Mandarin. Cortana and Google Now failed to respond for an accurate result. The test came to an end with Siri beating its competitors in a multi-language test. Do check out the infographs for a detailed view. 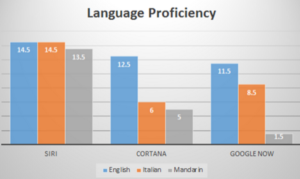 Seemingly, Cortana made some racist ads to down show Siri, but judging by the statistics there might be differences in opinion. What we observed is that Cortana showed up with more search result inquiries which means it had inaccuracy for precise answers. In terms of accuracy considering all of the languages, Siri made a tremendous score of 76%, topping the remaining two virtual assistants with a lot of margin. Google Now, which came second, scored 46% of accuracy and beat Cortana with 4% (42% for Cortana). Unexpectedly, the results came out adversely as Cortana came last.

The experiment was a mere test of accurate recognition, response and accuracy. All of the virtual assistants had no varying conditions and the results came out astonishing. If your views differ from ours, do share it with us.