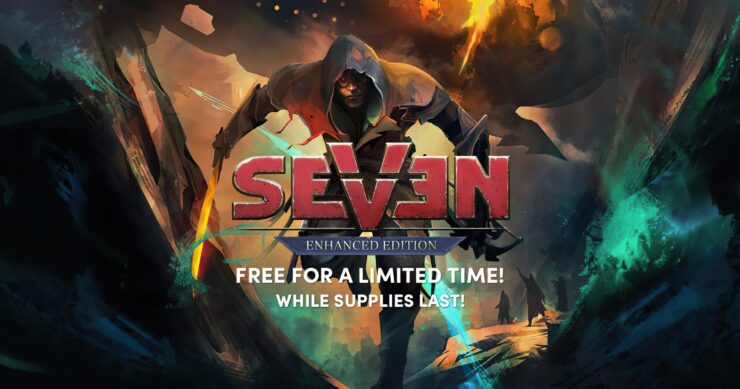 Seven: Enhanced Edition, the revised version of the top-down open world stealth/parkour RPG Seven: The Days Long Gone, is now available for free via Humble Bundle. You need only head to this page, log in with your Humble Bundle account, and take advantage of the offer before December 9th. That said, supplies may finish up sooner than that, so doing it right away is certainly safer. The code is redeemable through GOG.com.

Seven: Enhanced Edition includes the base game and the Drowned Past DLC, with the latter providing an extra seven hours or so of gameplay. Check out our review of the original game here, of which we've posted an excerpt below.

Seven is a rich game with a ton of worldbuilding, lore and exposition around every corner. You get a real sense of the goings-on of the Vetrall Empire and the factions at play like the Biomancers or the Technomagi. To be honest, it’s quite a lot to take-in and a lot to read if you’ve got the time. Terial himself is a fun character who never takes things seriously no matter how dire the situation is. He also has a tendency of being flippant at any given opportunity. It's a good balance since the rest of the game takes itself very seriously.

Seven is dense with things to do with unparalleled amount of freedom. The enormous island prison of Peh is technically open for you explore and cause trouble. Different sections of the island require you have certain Visas that’ll get you past the heavily guarded checkpoints around the island. You being a master thief, acquiring Visas shouldn’t too hard if the conventional ways become unavailable if you catch my drift. Feel free to steal whatever you want when you want. Just don’t get caught or you’ll find yourself becoming very used to loading your latest quick-save.

The Sims 4 is Completely Free for a Limited Time Only