Steal your way to success in the open-world sandbox isometric cRPG, Seven: The Days Long Gone.

Seven comes to us from IMGN.PRO and Fool's Theory, a Polish development team comprised of former CD Projekt Red developers along with other veteran indie developers who've seem to have taken cues from games like The Witcher, Shadow Tactics: Blade of the Shogun, and Hard West for their ambitious take on the isometric cRPG genre.

You play as Teriel, a thief with a devil-may-care attitude who, through circumstances beyond his control, ends on a prison island in a post-apocalyptic future where magic and technology are one and the same. I should also mention that Teriel becomes possessed by an ancient demon who rides shotgun in his head and sets him on a path to save the world.

Seven is a rich game with a ton of worldbuilding, lore and exposition around every corner. You get a real sense of the goings-on of the Vetrall Empire and the factions at play like the Biomancers or the Technomagi. To be honest, it’s quite a lot to take-in and a lot to read if you’ve got the time. Terial himself is a fun character who never takes things seriously no matter how dire the situation is. He also has a tendency of being flippant at any given opportunity.  It's a good balance since the rest of the game takes itself very seriously.

Seven is dense with things to do with unparalleled amount of freedom. The enormous island prison of Peh is technically open for you explore and cause trouble. Different sections of the island require you have certain Visas that’ll get you past the heavily guarded checkpoints around the island. You being a master thief, acquiring Visas shouldn’t too hard if the conventional ways become unavailable if you catch my drift. Feel free to steal whatever you want when you want. Just don’t get caught or you’ll find yourself becoming very used to loading your latest quick-save.

What separates Seven’s gameplay from other isometric cRPGs is its focus on stealth and subterfuge over straight-forward combat and platforming. I loved the tiered design of the world which offers you more choices as you plan out your moments. The animations of Teriel parkouring his way around look really slick. The world design is a gorgeous fusion of fantasy and cyberpunk.

Even though stealth is encouraged, you still have a number of play styles at your disposal. Sneaking past enemies is the best call since all enemies have a distinct cone of vision and predictable routes that you can easily bypass. If you’re feeling extra sneaky, disguising yourself as a guard actually is a pretty effective way of going to places that are otherwise off-limits. Just don’t linger too long or guards will eventually see through your deception.

The element of surprise is your best friend. You can sneak up and murder enemies from behind with a backstab. You can even drop kill foes from above or leave traps to satisfy your more predatory instincts. Passive upgrades unlock new abilities like dropkicks and throws. Early on it’s easy to feel overpowered as you’ll find yourself effortlessly stealth-killing dozens of guards in the opening act of the game. That feeling changes as the game progresses, though, to the point where flat-out avoiding combat is your best call.

We didn’t get into sense mode yet. That's a sort of tactical view that feeds you important and often critical information about your immediate surroundings. You’ll see hiding spots, points of interest, enemy vision cones, threat levels, and the odds of survival.

There’s no shame in running from a fight. It’s basically the best defense when steal fails or you accidentally try to pickpocket someone in the view of a dozen witnesses in a bar (true story). It’s nice to be able to leap out a window or hop over the fence and hide in a bush until the heats dies off. It’s also nice to see that you have plenty of ways of getting yourself out of sticky situations. If you're forced to fight, the dodge button is your friend as you try to parry attacks and counter with a critical riposte. It’s harder in practice, anyway, since combat moves pretty fast and getting your timing down can seem near impossible.

The fact that you literally can pick up everything you come across has its downsides. Item management becomes a bit of a headache and the user interface definitely could use an overhaul. There's plenty of equipment to keep track of and I found myself simply selling everything in my inventory to make my life easier, mostly due to my compulsion to pick up every single item I managed to find. There’s a rather deep crafting/upgrade mechanic that could have been better explained that becomes crucial for getting the best gear in the late game.

Be prepared to spend an unusual amount of time trying to figure what to do with yourself. Peh is a big island with an intimidating amount of things to do. Thankfully, most of the sidequests are well written with a colorful cast of misfits that you'll come across.  You can see where games like the Witcher and Shadow Tactics influenced some of the level and combat design in Seven.

Seven: The Days Long Gone's ambitious tiered open-world design and stealth-focused gameplay offers a nice new twist to the genre with plenty of content to dig your pilfering fingers through.

Review code provided by the publisher. You may purchase the game on Green Man Gaming. 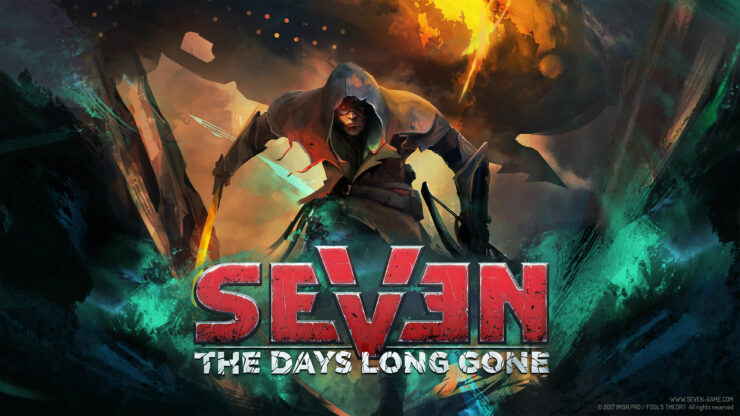