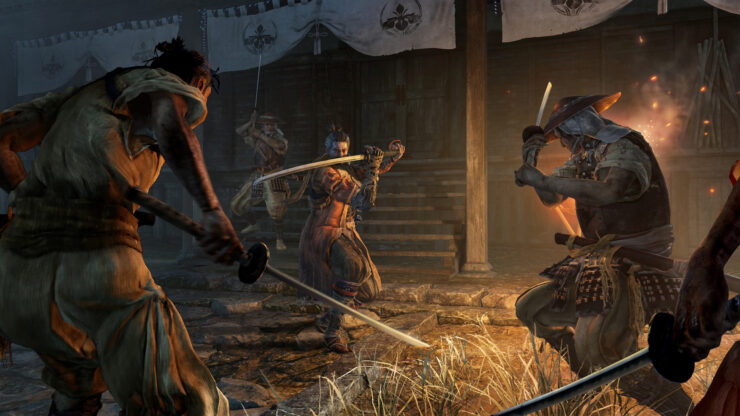 Sekiro: Shadows Die Twice is certainly among the biggest games of 2019, particularly for fans of the action genre as highlighted in Nathan's list.

Game Informer has picked the game developed by From Software for their monthly reveal coverage. In an interview with the developers, we learned that boss fights will be, on average, a lot more dynamic than in the Souls titles.

Marketing and Community Manager Yasuhiro Kitao: We have to restrict ourselves, and how far we can take that balance and that tuning, in order to cater to all these playstyles. Sekiro, with a fixed protagonist, allows us to hone in on that single-player experience, and tweak the boss battles and the encounters to accomodate for all of these tools at the shinobi’s disposal. So we want players to eventually use every aspect of their arsenal and really use their cunning, and use every aspect of their skillset, to take on these really challenging foes.

Game Director Hidetaka Miyazaki: The traversal options allow much more dynamic movement within the boss arena, both for yourself and the boss character themselves. Previously, you would have just had to run around a huge boss’ feet and hack away at his ankles, but now you have all these movement options; you can both fully use the extent of that arena.

There are boss fights that through design didn’t fit that staple. If in every boss fight you were able to use the grappling hook to zip everywhere or stealth kill every boss, it would just get monotonous and boring. So there may be boss fights where you’re up against a huge creature and you need to use the full arena and get around very quickly and use that dynamism, but there may also be fights where you just need to go toe-to-toe and use every piece of kit in your arsenal.

Even though Sekiro has been largely stripped of the RPG elements that have traditionally accompanied Souls games, defeating bosses will still provide players with useful items.

Yasuhiro Kitao: We do want people to feel like, ‘Yes, I’ve beaten this boss, I’ve gotten something from it, I’m able to improve. It depends on the boss, but for instance with one of the very early bosses in the game, you acquire the item that allows you to begin restructuring your prosthetic tools, so this opens up this whole new line of customization.

In another interview, the two From Software developers focused on the different kind of storytelling of Sekiro, which will include a voiced protagonist.

Yasuhiro Kitao: This time we have a fixed protagonist and we have a cast of characters who we are trying to build that story around. We’re trying to tell more of a drama, if you will, of these characters.

Hidetaka Miyazaki: Having this key protagonist allows us to build a cast of characters around him, and his personality, and his history. We feel like, you know, not the typical NPCs that you run into during the game, but these kind of central – these core characters that are central to his presence in the world, and his story ­– are going to be playing a lot of that role of the story in the gameplay. So, we feel like you’ll be able to experience both his past, in that sense, and the here-and-now of where the game takes place.

Yasuhiro Kitao: It's actually a very 'From’ way of doing a protagonist, and the way he conducts himself and the way this character kind of evolves is very kind of From-esque. He'll say a few things here and there, but yeah, he won't bore you to tears with constant monologues.

Sekiro: Shadows Die Twice is out March 22nd on PC, PlayStation 4 and Xbox One.

The Bloodborne Unofficial 60 FPS Patch Has Been Released Online