The last remaining puzzle in the Xe HPG teaser video has been solved as well. While we initially thought only 2 instances of code were present in the video, there was actually a third as well - although much harder to spot.  This code was eventually spotted by twitter user Andy James and completed a set of coordinates that leads slightly west of the American side of Niagra Falls (more specifically Goat Island).

Both Goat Island and Niagra Falls are ideal codenames for the upcoming Xe HPG platform and it is likely we are looking at one of them. It could also have something to do with a physical Xe HPG scavenger hunt that is linked to the Xe HPG scavenger hunt page - although I would consider this eventuality less likely.

We already knew about 79.0731W and Andy James discovered the following coordinates as well:

This makes the full set of coordinates as 79.0731W and 43.0823N. When you enter these coordinates in Google Maps, it takes you to a point just west of Goat Island overlooking the river of Niagra Falls.

As mentioned earlier, both Goat Island and Niagra Falls are ideal candidates for a codename. The rule of thumb for a codename is that names of public landmarks which cannot be copyrighted are typically used for these products. Considering the COVID situation it is unlikely Intel is planning a physical scavenger hunt in this area (not to mention it would alienate non-US and non-Canadian customers).

Considering the coordinates are actually dead center over the falls, I would also say that the probability of the codename being Niagra Falls is far higher than it being Goat Island. It could also be something unrelated entirely the has to do with the Xe HPG Scavenger hunt and the upcoming session by Intel CEP Pat Gelsinger. In either case, we will know more by 26th March 2021 - which is when the special event happens.

Given below are the screenshots of the code embedded in Intel's Xe HPG video that are scattered throughout the teaser:

Wccftechianr @duckofdeath was the first one to crack the binary code as they correctly realized that the decimal translation of the binary code was actually an IP (35.160.237.208) that led to the Xe HPG scavenger site. The IP is the result of only the binary puzzle though so it could mean that additional information still remains locked in the alphanumeric sequence. If anyone else solves that we will update this article pronto. 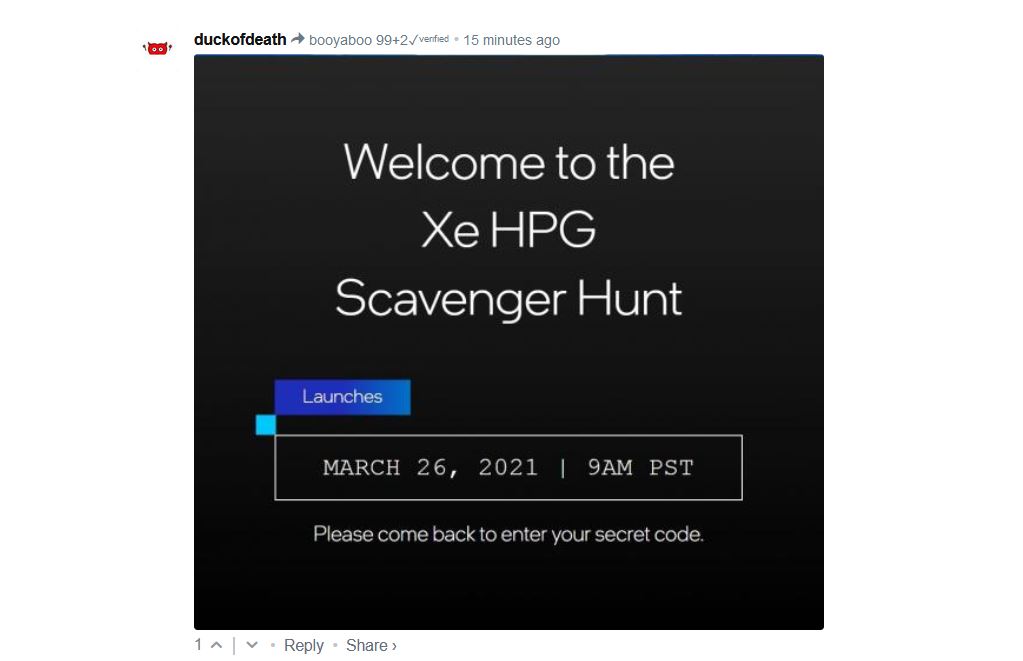 Intel Xe HPG will be the first gaming graphics card from the company and will likely feature 512 EUs or 4096 ALUs (cores). They will be targeting the mid-end market segment and pricing should be really affordable considering what is going on in the markets due to cryptocurrencies right now. Xe HPG is going to be the company's trial run in the gaming graphics segment and will be the predecessor to significantly more powerful cards if the trial is successful.