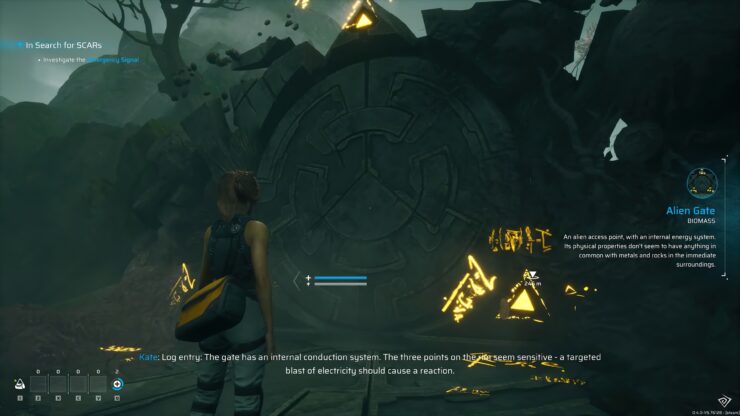 Following the reveal at E3 2021, today we're getting a new look at Scars Above thanks to an eight-minute-long Pre-Alpha gameplay video uploaded by Mad Head Games. The Serbian development studio, previously responsible for games like Pagan Online, is aiming to deliver a Sci-Fi action/adventure game that appears to mix detective elements with more traditional action and shooting elements, including boss fights.

Scars Above is a challenging, immersive third-person shooter inspired by modern type action-adventure games. It takes the genre staples, such as the rewarding feeling of overcoming difficulty, and combines it with a compelling and intricate story, meticulous and lavish world design, and a living, breathing ecosystem to explore and endure. Scars Above is a game of mystery and discovery. Something strange has entered Earth's orbit; an object alien and unknowable, made out of matter that seems not to obey the laws of physics - the Metahedron. As a part of a hastily gathered group of astronauts and scientists sent off to explore it, your fate takes a jarring turn as you awaken in another world - dazed, alone on an alien planet... but determined to stay alive.

Our protagonist, Kate, is not a battle-hardened soldier or super-powered assassin - but a resourceful, capable, and strong-willed individual with the will to endure any hardship. She is, first and foremost, a scientist: someone that uses their mind as a weapon -and with this weapon, Kate is determined to survive. She represents the best in humanity: our ability to overcome fear with curiosity, pain with determination, and darkness with reason.

As a reminder, Scars Above will be released under Koch Media's new Prime Matter label. There is no release window yet and we also don't know which platforms the game will launch on but stay tuned and we'll keep you apprised of all updates.