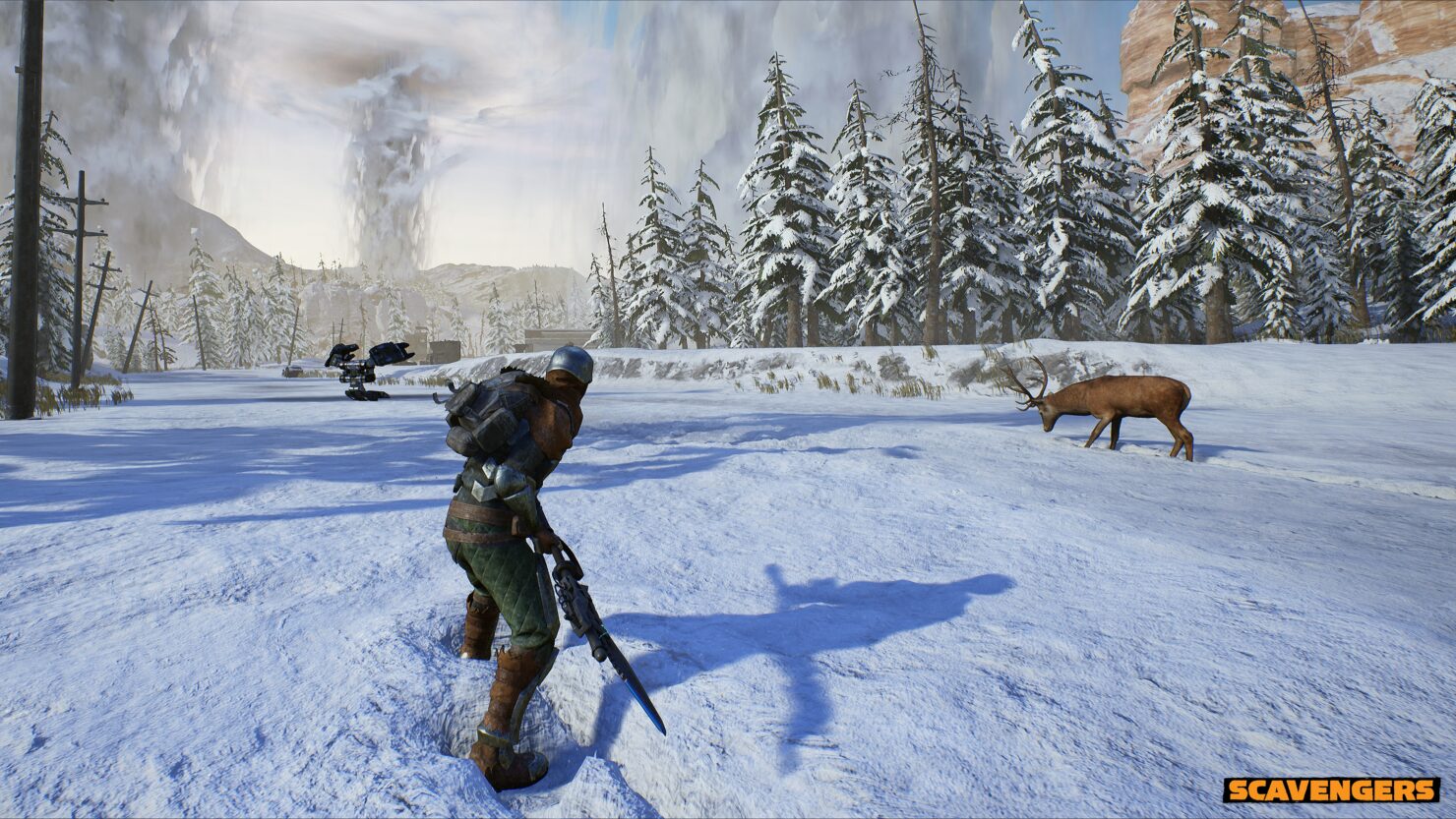 Scavengers is the debut game of Midwinter Entertainment, the studio founded by former Halo Franchise Director Josh Holmes when he left 343 Industries.

An online game based on the concept of 'co-opetition', which basically means PvE and PvP elements mixed in any given session, Scavengers was available for the first time to play at E3 2019. Based on our brief session it is safe to say Scavengers is still quite rough around the edges, though that's to be expected given the current state of development (pre-Alpha). The gameplay itself is reminiscent of something like The Division's Dark Zone, with the addition of substantial survival elements.

Players are dropped in various separate teams on the permanently cold surface of the planet with no weapons and have to scavenge everything they need straight from the environments. The initial goal of everyone, beyond surviving the extremely low temperatures (you'll have to warm up at certain spots before venturing forth and risking death by exposure), is to collect enough samples for the mother AI which according to the lore is trying to fix Earth through research. Only once enough samples have been collected will an extraction dropship be sent to the ground.

Getting the samples requires engaging with the mutated wildlife and raider NPCs. Once that cooperative phase is completed, the game's balance tips towards competition as there isn't space for everyone to be extracted, which inevitably leads to clashes and ganking with other player teams. Furthermore, those players who do manage to be extracted are going to be rewarded based on the number of samples they got, and those can be looted from the corpses of other players, clearly another incentive to get hostile with them.

Our experience with the game at E3 2019 was quite fun, though not something we haven't seen before, as beyond The Division's Dark Zone there is also another game with very similar concepts called The Cycle (by Yager). Crytek's Hunt: Showdown also offers a comparable mix of PvE and PvP elements, albeit in a very different setting.

After our hands-on, we also had the chance to interview Josh Holmes himself. Check out the full transcript of our chat after the embedded trailer; you can sign up for future playtests on the official website.

This is the first time that you are showing off Scavengers, right?

Absolutely, yeah. First time it's been hands-on, except for a visit to the studio by PC Gamer.

What was the feedback you got so far?

It's been great. It's been really exciting to see people playing the game. And just all of the different endings that we've seen all the different stories, even within this match seeing your team did all the work, got all the samples and yet only one of your team members made it aboard. Another team managed to eliminate one of the teams and take their samples and escape while the two other the teams got wiped out by storms and wilderness completely. Every match is different, which we love.

You're using Improbable's SpatialOS for Scavengers. How does that help you achieve your vision?

Well, because the game is bringing together so many AI as well as players in a very large scale experience, it allows us to go beyond the limitations of a single server and apply a theoretically limitless amount of compute to support the experience. Right now we're building an experience that will launch with around 30 players (per session) but will continue to scale over time and expand the world and the experience in the player count and the number of AI. What SpatialOS allows us to do as a small developer is have a foundation that we can scale up over time without having to go back and rearchitect the foundational networking.

I see. Does that mean you're also planning to increase the size of the map over time?

What you are experiencing here today, because we're featuring only a 12 player experience, we're playing on a much smaller portion of our world size. So when we launch the game, you'll have right here you're playing on I think, one and a half of our bones, we will have about five biomes in terms of different locations that can be explored. But we foresee ourselves continuing to build on the map and expand the boundaries of the map, add new locations and also update the map and change things throughout the course of the service of the game.

Right. So will there be multiple environments at the launch of Scavengers or just Winter and its trademark snow?

Well, it is all a winterized world but within the context of the world, we have a number of different sort of visual palettes and differentiated areas that you'll be able to explore, some exterior, some subterranean and interior. And through that, we have to get a lot of visual diversity and diversity of play experiences.

You said that the mother AI is looking to get samples from the titular scavengers. Is it feasible to imagine that there will be a next phase of the story and gameplay once the sample collection is over?

Very possible. This is the core mode that we're developing right now. But I have ideas about many special events and different types of modes that can be a part of the experience, and things that we'd like to add and expand upon through the life of the service to keep players excited about continuing to play the game. And, you know, even within the context of each mode, a lot of the elements of the mode are very dynamic and will change from session to session, which we hope will keep the replayability very high, as players will always be on have to be on their toes and looking to respond to the challenges that the game provides.

On the PvE side of the game, do you plan to add more bosses over time as well?

We have two main factions that you're facing today with the Scourge. We have additional enemies within those factions that we're working on that are not a part of the experience right now, we'll be adding those for launch. Some of those are larger scale, sort of mini-boss type enemies. We also have wildlife to expand upon as the Scourge infected wildlife as well. Beyond that, once the game goes live we want to continue to add new AI factions, we have some ideas about where we want to take that and how that plays into kind of the story of the world that will unfold over time. But at the same time, we're looking forward to hearing what the community has to say, and what are the things that the players feel are most important to add, expand upon, within the game.

Is Scavengers going to be free to play?

Yes, we've confirmed this is a free to play title. For us it's really important in any multiplayer experience to have as many players playing as possible, the greater the size of the community, you know, the more experiences that people can share. And so we want to bring it to the largest possible player base. And for that reason, we're making it free to play. We have a character based system and our plan is to make a number of characters available for free for players to use. And our intention is to let players try out all the characters and then select the characters that they would like to unlock for free. And then beyond those characters, they'll be able to purchase additional characters for play and also cosmetics to customize those characters and express themselves.

Which development stage is the game in right now?

Are you going to expand the Closed Alpha test soon to include some of the game's followers via invitation?

Yeah. There's a small group playtesting with us right now. And we will be growing that group, we have a number of people signed up on our website and anyone who wants to join us in playtests on the PC can go to that site and sign up. And as we expand the number of participants throughout 2019, they'll be able to play the game and we look forward to using their feedback to help make the game better.

Beyond SpatialOS, you're also using the Unreal Engine on the rendering side, correct?

Yes, Scavengers is being built using the Unreal Engine, which is fantastic just because it's a world-class engine with incredible tools. And that, again, allows us as a small team to achieve an ambitious vision, the combination of those two things. And it's been great to work with it so far.

The Unreal Engine supports many platforms. Are there any plans to eventually expand Scavengers beyond the PC?

Right now, we're focused on PC as our lead platform. But you know, as you may have seen, there are many developers on our team who have experience in consoles, three of the four founders came from the Halo team at Xbox. And so we have an eye to bringing the game to console in the future. We haven't really decided yet exactly what our release window will be. But that's something that we'll release more info on as we get closer.

Given that you are using the Unreal Engine, do you plan to distribute Scavengers on the Epic Games Store, Steam or perhaps you'll use your own launcher?

At this point, we haven't really made any decisions about how we plan to release the game in terms of specific marketplaces or anything like that. But that's something that again, as we get closer to the release of the game we will be able to provide.

Again, with Unreal Engine powering Scavengers and PC as your target platform, do you plan to add real-time ray tracing to the game?

Yeah, that's actually something that we've been working on. And right now, we're just going through an upgrade to 4.22 with the Unreal Engine, and that will allow us to now start adding support for ray tracing.

How challenging has it been for you to move from leading 343 Industries to this indie project?

I mean, it's challenging going from a large scale to play team where you have the resources to build almost anything that you can imagine, to an indie team where you can move much more quickly, make fast decisions and iterate. But at the same time, you have to focus your attention on the most important things and knowing where to focus your time with that very limited commodity and the limited number of people is probably one of the biggest challenges. And I think, for us, we're a really ambitious team. We have an ambitious vision that we're trying to achieve for Scavengers. And we constantly challenge ourselves, push the boundaries of what is possible for a team of our size. And I think knowing where to push and where to focus is always tough.

Anything else you want to add about Scavengers and Midwinter Entertainment?

I just want to say it's been amazing to see the positive feedback from people playing the game here at E3. And for the team at Midwinter who's been working on this game for the past year and a half, to be able to bring it here and have it playable for the first time and see the response and play along with people has been incredibly rewarding. We're just really looking forward to sharing the game with more people and continuing to have these incredible stories come out within each session. So thank you for playing today.