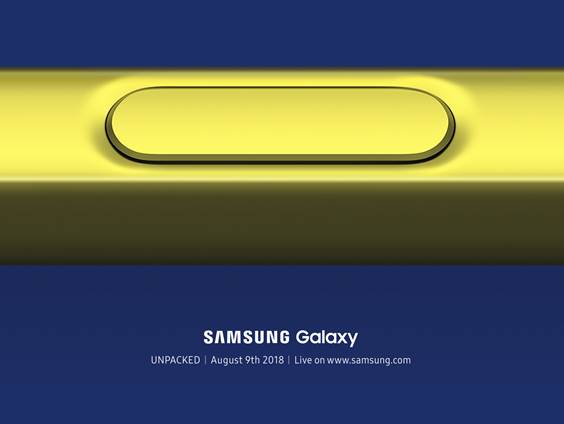 Finally, we have an official announcement from Samsung stating that official release date of the much-awaited Galaxy Note 9. The launch event will take place in New York on the 9th of August. The timing is consistent with what leaks have indicated so far and is consistent with Samsung's annual smartphone rollout schedule. Several people have already received the invitation, including popular YouTuber MKBHD who Tweeted:

The actual invite has a minimalistic feel to it and may very well be the first time we looked at an official photo of the Galaxy Note 9. We're probably looking at a power button here that doubles up as a fingerprint sensor or maybe it's just the Bixby button, it's hard to tell. It could even be a close-up image of a recessed S-Pen nested in the phone chassis.

What we do know about the Galaxy Note 9 is that it'll be powered by an Exynos 9810/Snapdragon SoC along with 6GB/8GB of RAM. We can also expect a 1440p Super AMOLED panel along with a fingerprint scanner. There have been several speculations about the location of the said fingerprint scanner, with some leaks indicating that Samsung might go the Vivo route by integrating it in their display.

Additionally, a 4,000mAh Quick Charge 4.0 compatible battery is to be expected too. The camera setup, however, is shrouded in history and people have had a field day trying to figure out what Samsung has in the cards for us. Lastly, the S-Pen is to receive a few upgrades as well. Heading over the software side of things, the Note 9 will almost certainly run Oreo 8.1 w/Samsung Experience 9.0 on top. We might even get to see Bixby 2.0 make its debut with the device. Bixby 2.0 might have what it takes to make Bixby relevant again, as Samsung recent stopped handing out Samsung Pay reward points to Bixby users.

[UPDATE: Could be 120 days] Fortnite for Android Might Be Exclusive to Galaxy Note 9 for 30 Days