Bixby made its debut almost a year ago alongside the Galaxy S8 and S8+. Despite its massive expansion across 200 countries, it isn't as feature-rich as Alexa or Google Assistant. Samsung has promised to release Bixby 2.0 for some time now, but we know nothing of its release date. Until now, people who used Bixby could 'level up' by asking it to perform common tasks such as a translation or image recognition. Today, Samsung has announced that they are terminating the “My Bixby Level” service effective August 10th, 2018.

The My Bixby Level service, allows users to unlock Samsung Pay rewards points with each level. The number of points one could get varied and increased with your level. The rewards points could be spent on sweepstakes or Samsung Pay Visa gift cards. Your existing reward points earned via levelling up will remain intact and can still be redeemed. 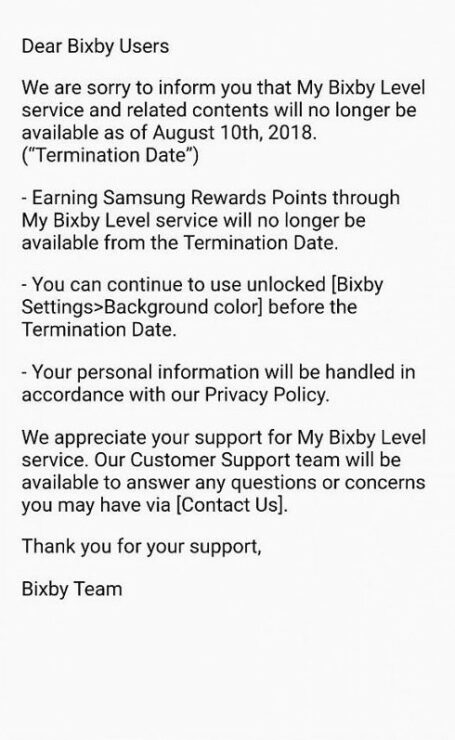 Another minor reward for levelling up was the ability to unlock different backgrounds for the app. It isn't clear if the backgrounds will be available post-termination, but Samsung states that people who have already unlocked them will be able to use it. If you want to unlock the backgrounds, simply use Bixby and level up. I've completely disabled Bixby on my Galaxy S9+ but might give it a try just for the backgrounds.

The program was introduced as an incentive for users to use Bixby and had to be kept in place because people stopped using Bixby altogether when it was suspended in between. It's a bit sad that Samsung had to literally bribe their users to use Bixby and the termination of the program was a long time coming. Hopefully, Samsung has something big in the pipeline for Bixby that will make users want to use it out of their own free will. Granted it'll be a while before Bixby gets anywhere close to its competition, but some improvements to the service are always welcome. Now, if only Samsung let us remap the Bixby button.