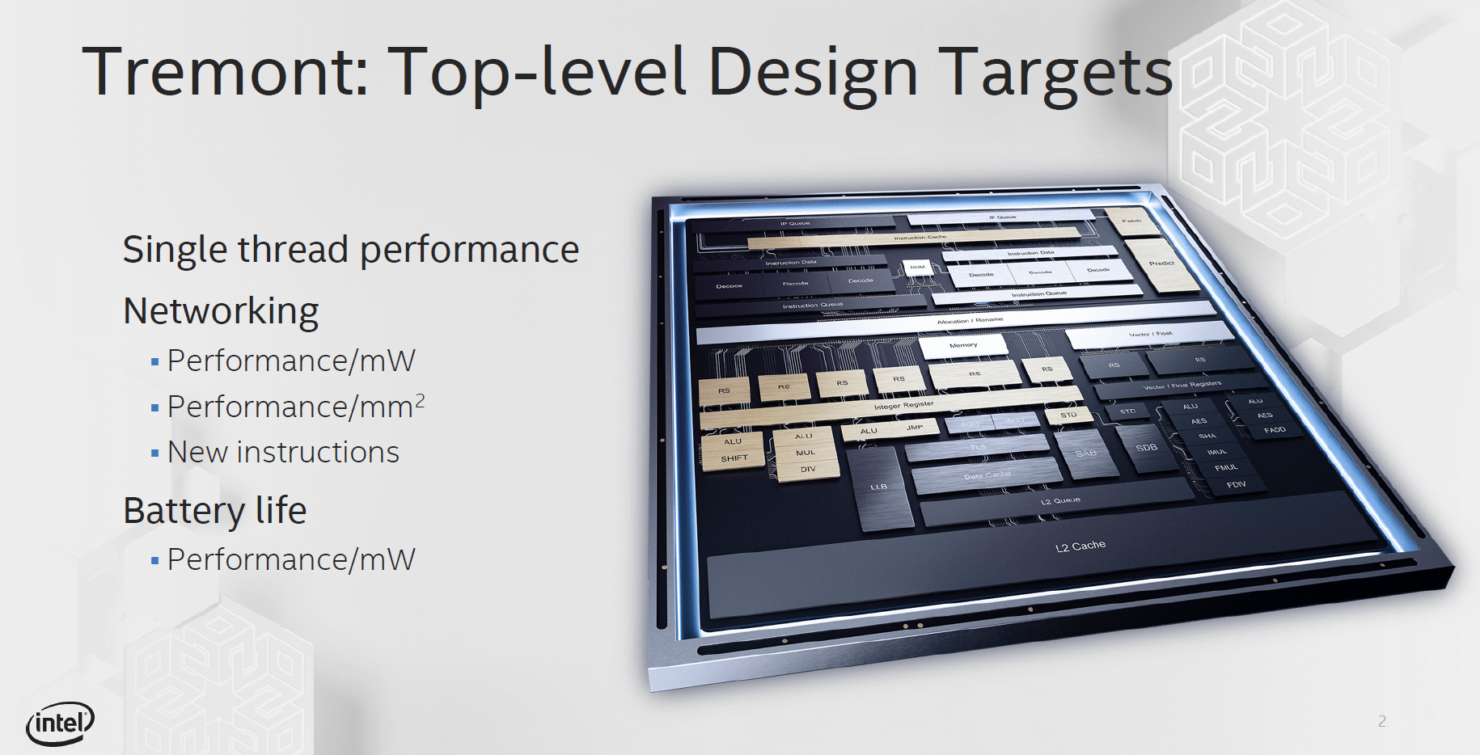 Intel appears to have pulled out another card from its sleeve - the brand new Tremont architecture which marks the first major update since Bay Trail was released in 2013 and an architecture that will succeed Goldmont+. This will be the first 10nm process for this family of products and will be used in the Lakefield platform which brings the concept of Big.little cores (something smartphone tech enthusiasts would undoubtedly be aware of) to the x86 mobility product sphere. Mixing 'big' Sunny Cove and 'little' Tremont, Lakefield is set to offer a distinct upgrade over existing x86 setups today and will offer superior performance without the cost of battery life for mobility devices.

Here is what the official description for the Intel Tremont unveiling event at the Linley Fall processor conference reads:

The Tremont CPU architecture was designed for enhanced processing power in compact, low power packages. Products based on Tremont will span both client, IOT and Data Center products and combined with broader Intel portfolio of IPs Tremont will power a new generation of Intel products across the compute offering. This presentation will unveil, for the first time publicly, the details of the micro-architecture of Tremont as well as briefly touch on the implementation of Tremont with other Intel compute cores. 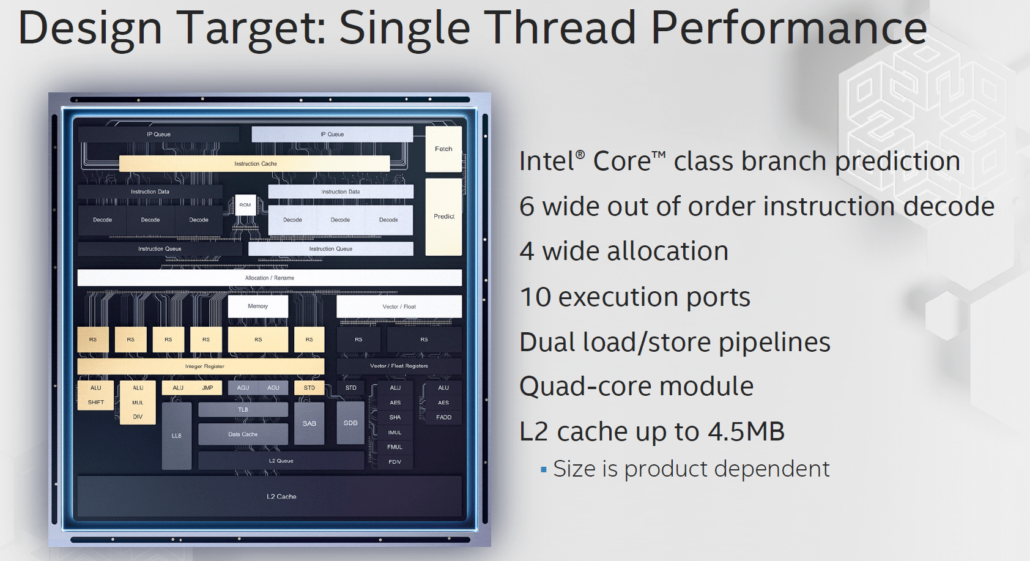 Intel's Tremont instruction set will feature a Core-standard branch prediction as well as 6 wide out of order instruction decode with 4 wide allocations. All of this will be connected by 10 execution ports and an L2 cache up to 4.5MB. The end product is a product that roughly offers Sandy Bridge level of performance in a highly mobile and portable package. Intel is focusing significantly on the single-thread performance this time and showed off some single-thread performance improvement graphs (SPECint* Rate base) relative to Goldmont Plus. 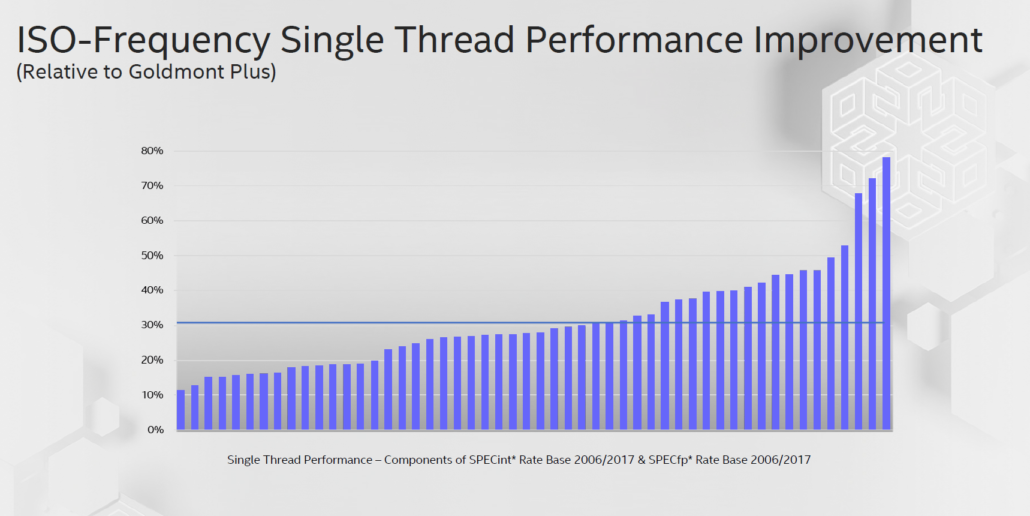 The performance hybrid part of the Tremont cores is something we have already tackled before in the Lakefield platform overview. The power/performance graphs definitely mirror Sunny Cove but features much higher power efficiency at much lower performance levels. The result is a core that will significantly improve battery life even when the "little" cores are engaged. Sunny Cove is set to be the biggest update in Intel's lineup and both of these products will be manufactured on the 10nm process. 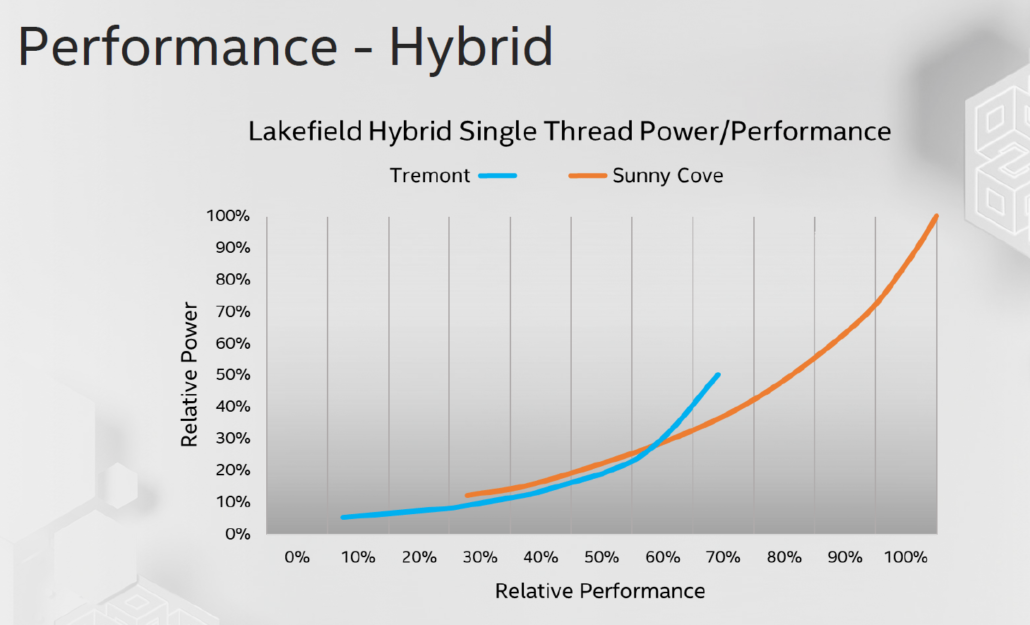 What we know about Intel's Foveros and Lakefield

Talking about the SOC itself and its individual layers, the Lakefield SOC that has been previewed consists of at least four layers or dies, each serving a different purpose. The top two layers are composed of the DRAM which will supplement the processor as the main system memory. This is done through the PoP (Package on Package) memory layout which stacks two BGA DRAMs on top of each other as illustrated in the preview video. The SOC won't have to rely on socketed DRAM in this case which saves a lot of footprint on the mainboard.