So it's just a few hours left in Samsung's Cyber Monday deals! Deja vu? Actually no. We had shared Samsung's "Only hours left! Don't miss out on great deals" a few days back. Apparently Samsung Cyber Friday deals are mostly Black Friday extended. How sad of these store who first made many consumers make rush decisions and now are extending their offers? Can't be too bad though as we still get a few good hours to make any last minute purchases. 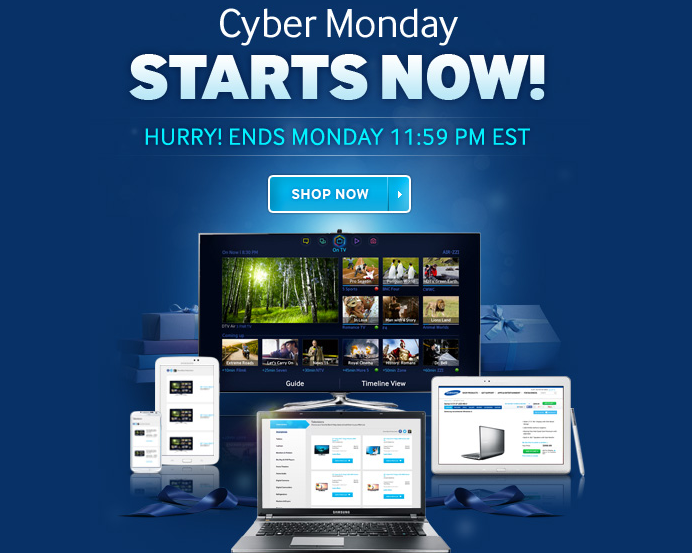 As before, don't expect anything on smartphones from Samsung. However, some very good discounts are being offered on Samsung's tablets, cameras, camcorders, home theaters and other electronic appliances!

If you are planning to gift some gadget to a kid, Samsung's Galaxy Tab 3 7.0 is also giving a $40 discount on Samsung Black Friday promotion.

You can save some $50 on Samsung's digital cameras, while laptops offered on Samsung Cyber Monday promotion include up to $200 discount!

You can also avail some tempting discounts on Samsung Cyber Monday deals on televisions. Samsung seems more generous on Black Friday promotions on Televisions. While our blog focuses more on tech gadgets, you can see some very good promotions on Samsung Plasma televisions - as big as $400 discounts! For more check out Samsung Black Friday promotions on Televisions here. Totally irrelevant again, but guess what is the biggest Samsung Cyber Monday doorbuster? Samsung's refrigerators, giving you some $800 discount! They look cool, no?