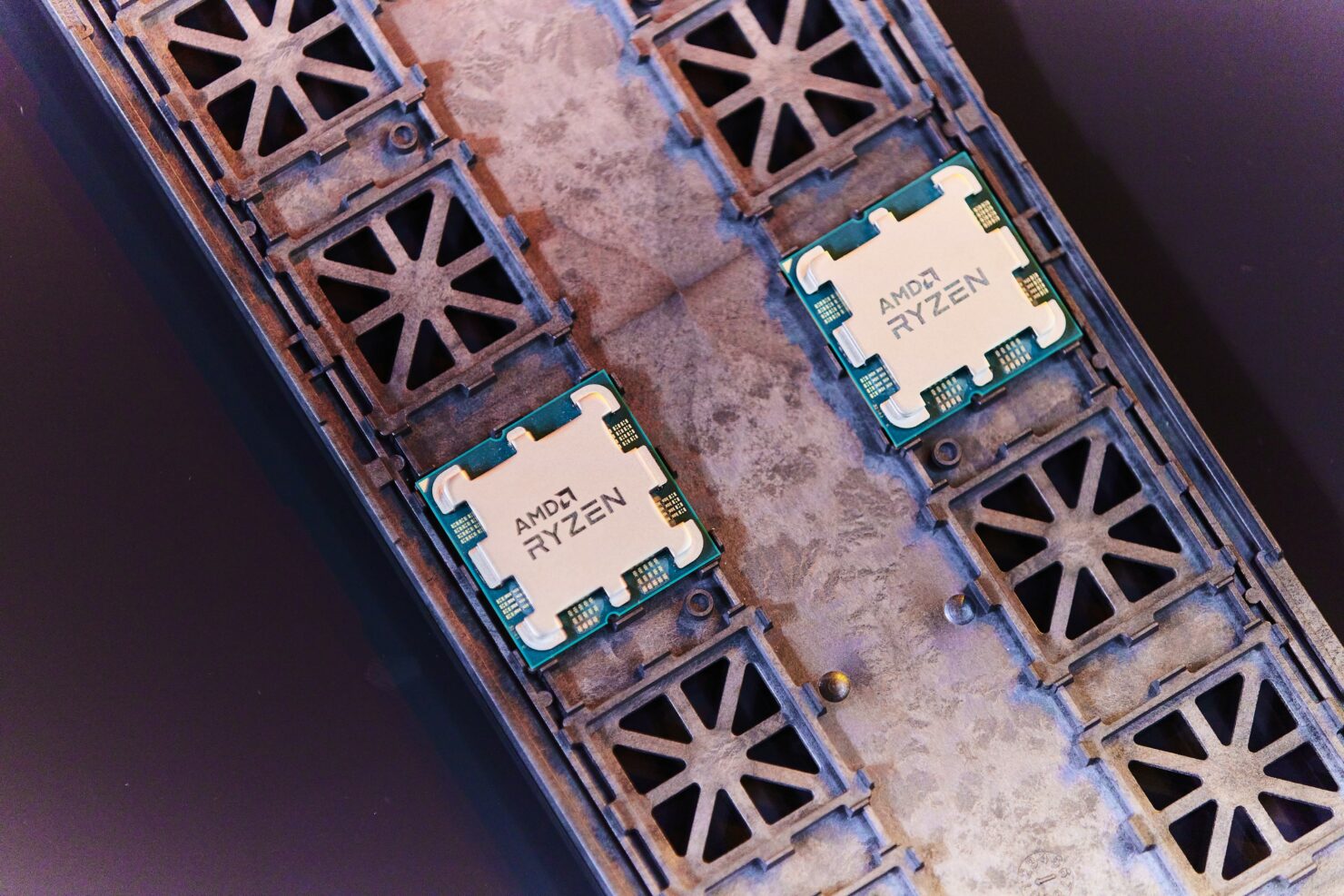 AMD officially lifted the curtains off its next-generation Ryzen 7000 Dekstop CPUs that are going to feature the Zen 4 core architecture at CES 2022. The next-generation lineup will be bringing some drastic changes, not only limited to the CPU and we are going to talk about what you can expect in terms of specifications, performance, and prices.

While Intel may have managed to take the performance, value, and efficiency throne from AMD with its 12th Gen Alder Lake lineup, AMD isn't going to sit silent. They have planned two brand new CPU launches this year with the upcoming one being a demonstration of how 3D V-Cache can allow gamers to benefit from faster performance in a mainstream package. But that's just one chip, the bigger launch is scheduled for the second half of 2022 in the form of Ryzen 7000 and it's going to fundamentally change everything for the Ryzen Desktop CPU platform.

AMD AM5 Platform - A New Beginning

Before we talk CPUs, we have to talk about the platform itself. The AMD Ryzen 7000 CPUs will be migrating to a new home known as AM5, the successor to the long-lasting AM4 platform. It marks a fresh start for the Ryzen Desktop family and as such, existing Ryzen CPUs starting with Ryzen 1000 & all the way up to Ryzen 5000 won't be supported by the new platform and we will tell you why it is so.

The AM5 platform will first and foremost feature the brand new LGA 1718 socket. That's correct, AMD isn't going the PGA (Pin Grid Array) route anymore and now focusing on LGA (Land Grid Array), similar to what Intel uses on its existing desktop processors. The main reason to go LGA is due to the addition of enhanced and next-gen features such as PCIe Gen 5, DDR5, etc that we will get to see on the AM5 platform. The socket has a single latch & gone are the days of worrying about pins underneath your precious processors.

In terms of features, the AM5 platform will initially support AMD's Ryzen 7000 'Zen 4' Desktop CPUs and extend that support to future Ryzen CPUs and APUs. The platform offers DDR5-5200 (JEDEC) memory support, up to 28 PCIe lanes (Gen 5 standard), increased NVMe 4.0, and USB 3.2 I/O lanes & we have also heard chatter about native USB 4.0 support which will be a game-changer.

A new feature called RAMP (Ryzen Accelerated Memory Profile) will allow enhanced DDR5 memory OC on the new platform, similar to Intel's XMP. It has been a rough road for AM4 to offer decent DDR4 OC capabilities but that has more or less been sorted out by now, we can only expect DDR5 to have a much better OC and compatibility experience compared to DDR4 on AM4 platforms. Furthermore, it looks like the platform will only be DDR5 compatible and we won't see DDR4 options as we do on Intel's existing platform. But with DDR5 prices and availability improving, that won't be that big of a deal for most high-end consumers who AMD will be aiming first. 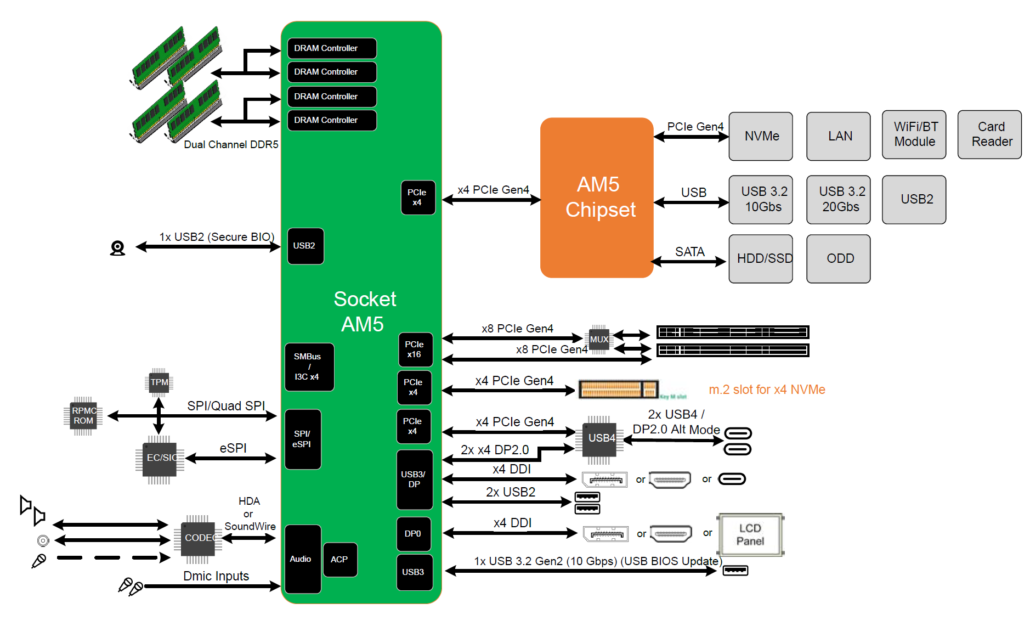 The AM5 compliant AMD 600-series motherboards are currently being prepped up by the board makers and are expected to include the flagship X670 and mainstream B650 chipsets. Due to some PCH die changes, the only ITX options available within the AM5 lineup will be based on the B650 PCH while the more flagship ATX & EATX options will carry the X670 PCH. Best of all, the new AM5 boards will be compatible with existing AM4 coolers as AMD has confirmed here.

Do note that the PCH names aren't fully confirmed yet but that's what we have seen in previous leaks. These features are expected to expand further as the AM5 platform matures. As we saw with AM4, the platform got a range of updates in the form of PCIe Gen 4, advanced PBO states, SAM & countless I/O updates as it reached its end cycle and the same can be expected from AM5.

As for longevity, AMD hasn't promised anything but they have stated that they want to see the new AM5 socket last at least four to five years, similar to AM4. While there has been a lot of controversy regarding Ryzen support on the initial AM4 motherboards, I believe that AMD has learned and will not follow the same route with AM5.

Coming to the CPUs now, the AMD Ryzen 7000 processors will be powered by the brand new Zen 4 core architecture which is going to be a total architecture overhaul. The CPUs will retain the chiplet design along with high-core counts. AMD hasn't confirmed anything in terms of specifications but it is stated that they will be powered by TSMC's 5nm process node and are designed for gamers first.

The next-generation Zen 4 based Ryzen Desktop CPUs will be codenamed Raphael and will replace the Zen 3 based Ryzen 5000 Desktop CPUs that are codenamed, Vermeer. From the information we currently have, Raphael CPUs will be based on the 5nm Zen 4 core architecture & will feature 6nm I/O dies in a chiplet design. AMD has hinted at upping the core counts of its next-gen mainstream desktop CPUs but there are other rumors that have stated that we will still be getting 16 cores and 32 threads. So whether that changes or not remains to be seen. However, a bump to 24 cores and 48 threads would be a nice improvement considering Intel will be increasing their core and thread count too in the coming 13th Gen family.

The brand new Zen 4 architecture is rumored to deliver up to 25% IPC gain over Zen 3 and hit clock speeds of around 5 GHz as demoed by them over at CES 2022. The demo featured an undisclosed Zen 4 Ryzen 7000 CPU running at 5 GHz across all cores (core count not mentioned) which means that single-thread clock speed would be beyond 5 GHz. AMD's upcoming Ryzen 7 5800X3D based on the Zen 3 architecture will be featuring stacked chiplets so that design is expected to be carried over to AMD's Zen 4 line of chips too.

The AMD Ryzen 7000 Desktop CPUs will feature a perfect square shape (45x45mm) but will house a very chonky integrated heat spreader or IHS. The CPUs will be the same length, width, height as the existing Ryzen Desktop CPUs and are sealed across the sides so applying thermal paste won't fill the interior of the IHS with TIM. That's also why current coolers will be fully compatible with Ryzen 7000 chips.

The Ryzen 7000 Desktop CPUs are also expected to feature RDNA 2 onboard graphics which means that just like Intel's mainstream desktop lineup, AMD's mainstream lineup will also feature iGPU graphics support. In regards to how many GPU cores there will be on the new chips, rumors say anywhere from 2-4 (128-256 cores) clocked at up to 1100 MHz for up to 0.5 TFLOPs of horsepower. This will be lesser than the RDNA 2 CU count featured on the soon-to-be-released Ryzen 6000 APUs 'Rembrandt' but enough to keep Intel's Iris Xe iGPUs at bay.

The only performance demo that AMD has provided is that of a pre-production Ryzen 7000 CPU running at 5 GHz across all cores (undisclosed amount) at 1080p. Just to give you an idea, current AMD Ryzen 5000 Desktop CPUs peak at around 4.8 GHz across all cores with a few samples hitting just under 4.9 GHz. A 5.0 GHz all-core boost in a pre-production unit means that we are most likely going to see AMD finally hitting that sweet 5 GHz+ core clocks in both single and all-core workloads which is very impressive.

Couple that with the architectural improvements and the aforementioned 20-25% IPC bump, you get a jump that is likely going to be just as significant as Zen 1 to Zen 2 or even higher. AMD hasn't disclosed full performance metrics yet but considering how a 3D V-Cache uplift will put Ryzen back on track with Intel's 12th Gen lineup, Ryzen 7000 has all the bells and whistles to counter not only Intel's 12th Gen but also the 13th Gen Raptor Lake parts which are scheduled to launch around the same time as Raphael.

Pricing is a much bigger topic to discuss this time around as we saw with AMD Ryzen 5000 CPUs. The Vermeer chips saw a bump in prices across all segments which were not welcomed by the PC consumers but still managed to break record sales figures, shipping over a million units in the first few months. AMD knows that they have the upper hand over Intel in terms of performance & that users are willing to pay the extra for their chips. As such, we can expect a similar or another bump in prices for AMD's Ryzen 7000 CPUs. 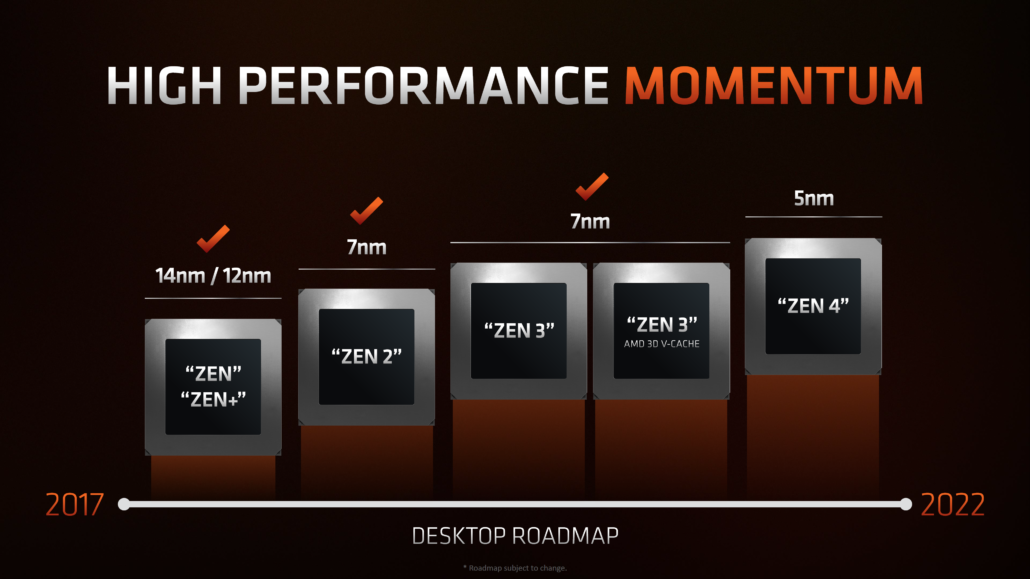 A recent report from industry experts suggests that TSMC is aiming to hike the prices of high-end CPUs by up to 20% this year. This is due to the complexities of the advanced 5nm process node due to several external factors, such as the continued high shipping and Foundry costs. The price increase is going to offset these variables and external factors that have affected the existing chip production process. And while there's a possibility that availability will get better for several of these product lines by the end of 2022, there's no confirmation if prices will get any better and that's the main concern for many right now.

Just for comparisons sake, following is the price bump of Ryzen 5000 CPUs versus Ryzen 3000 CPUs: 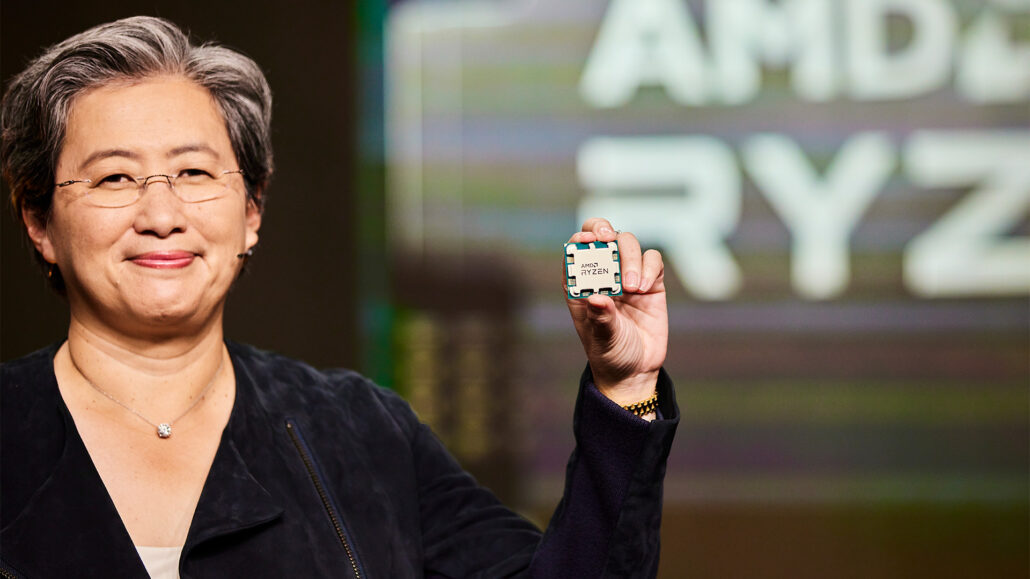 The current Ryzen flagship, the Ryzen 9 5950X costs $799.99 US and can be found on retail for around $700-$750 (discounted prices) even after more than a year since launch. The $800 US price tag is already the enthusiast category & anything more will be a hard pill to swallow for consumers but that's just where the whole tech industry is at right now.

Availability is something that AMD has reaffirmed recently. AMD's CEO has stated that we can expect Ryzen 7000 Desktop CPUs in the second half of 2022 and early rumors had pointed out an October-November launch timeframe however the most recent ones suggest that we can see the launch occur as early as June-July 2022. This will mark two years since the launch of AMD's Ryzen 5000 Desktop CPUs.

AMD Ryzen 5000 Desktop CPUs faced severe supply shortages when they launched but things got better in the same quarter. Since TSMC's 5nm process node is being utilized by other vendors, we can expect a similar situation at launch.

AMD officially lifted the curtains off its next-generation Ryzen 7000 Dekstop CPUs that are going to feature the Zen 4 core architecture at CES 2022. The next-generation lineup will be bringing some drastic changes, not only limited to the CPU and we are going to talk about what you can expect in terms of specifications, performance, and prices.
AMD
CPU
AM5
TBA