Mercury Research has published its latest CPU market share results for the fourth quarter of 2020 that show both Intel and AMD making some great strides. As per the data shared by the research firm, AMD managed to sell almost a million of its brand new Ryzen 5000 Desktop CPUs in Q4 while Intel gained market share over AMD for the first time in three years since the release of the Ryzen CPU family.

Well, there was something good to talk about at the end of 2020 for both major CPU makers. AMD Ryzen 5000 CPUs marked the biggest ramp ever in the company's history, shipping almost 1 million units in a single quarter despite the fact that their supply was heavily constrained due to TSMC and its 7nm process node being entirely gobbled up by consoles and several of AMD's existing 7nm line of products (including GPUs). 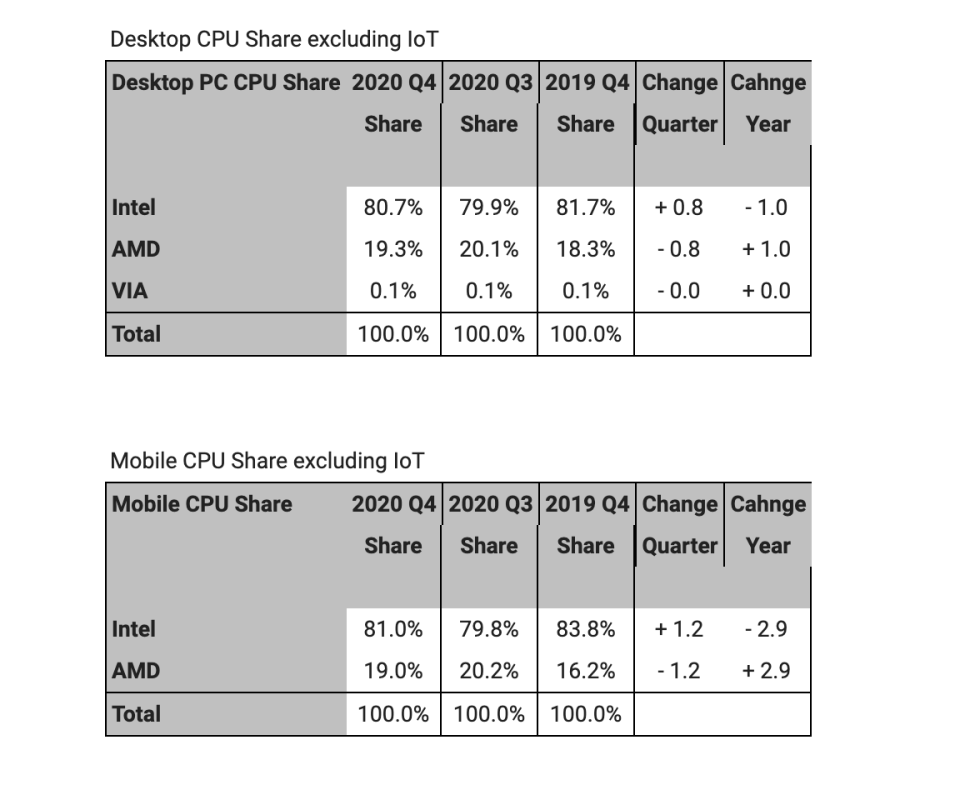 But considering 1 million CPUs isn't a small number at all, it goes off to show that there was just insane demand for AMD CPUs in the outgoing quarter & as the overall supply gets normal, we are only going to see more CPU shipments in 2021.

"The Ryzen 5000 supply ramp was record-breaking for AMD by a very wide margin."

"AMD also grew strongly in client CPUs, just less so than Intel, which is where AMD's share loss came from. In desktop, it's particularly noteworthy that the Ryzen 5000 "Vermeer" core CPUs had an explosive ramp in their first quarter of shipments, out-shipping AMD's best prior desktop CPU ramp by more than 2X. We believe AMD shipped close to a million units of Ryzen 5000, resulting in AMD having a record high desktop average price for the quarter." 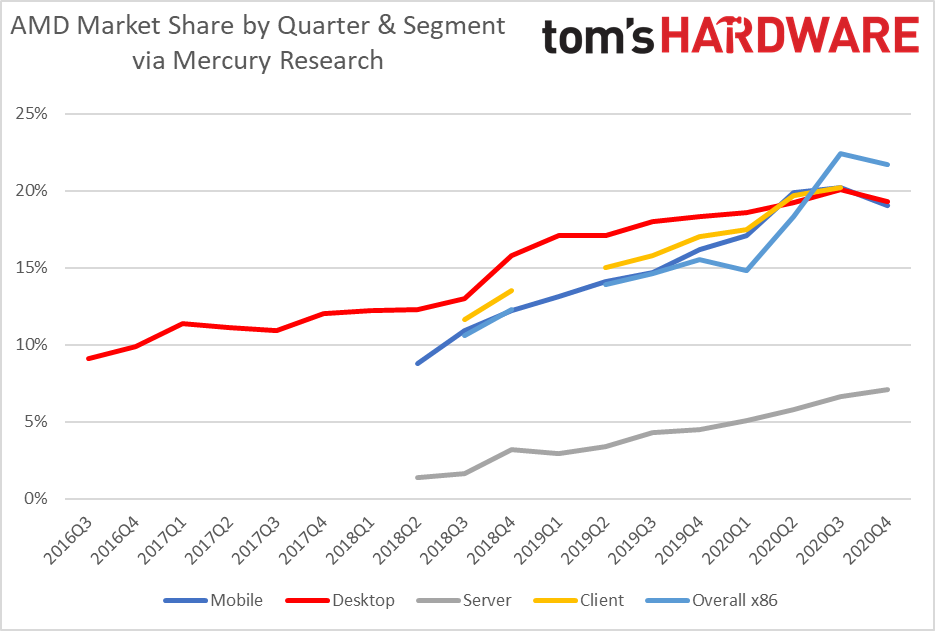 At the same time, Intel managed to increase its CPU market share in both desktop and notebook segments. This is partially due to Intel's increased CPU manufacturing capabilities with which the company can now offer larger volumes of its Core i3 and Core i5 families. As of right now, Intel's Desktop CPU market share stands at 80.7% while AMD's share stands at 19.3% (down from 20.1%).

"Intel's increased capacity enabled the company to out-grow AMD in the fourth quarter, resulting in Intel's first share gains in both the client desktop and mobile CPU segments in three years," said McCarron.

"Unlike mobile, Intel's share gains in the desktop market were due to higher large-core shipments, with i3 and i5 volumes growing in the quarter. Again, Intel's increased capacity for CPU manufacturing was a factor in the higher growth and share gains."

The notebook market saw similar results with AMD which was unable to fulfill huge demand for Ryzen 4000 'Renoir' APUs in the majority of 2H 2020. AMD has since introduced its Ryzen 5000 'Cezanne' lineup but that doesn't start shipping till later this quarter. The majority of notebook CPUs shipped were mainly entry-level and budget tier designs such as Intel's Celeron and AMD's Athlon A4 / A6 which are intended primarily for Chromebook's and low-cost PCs. The market share in the notebook CPU is split at 19% for AMD and 81% for Intel for Q4 2020.

"The fourth quarter was characterized by very high growth in general, but extreme growth in the mobile CPU segment in particular. Mobile CPU shipments are up nearly 60 percent on-year primarily due to Intel increasing supply. The demand that is absorbing all these new mobile processors is presumed to be due to COVID-19 related acceleration of the desktop to notebook transition that has been going on for the past few years, combined with an entry-level mobile CPU market that has been under-served for more than a year and is believed to have created a large backlog of demand for low-cost CPUs waiting to be filled," McCarron noted.

"A very large portion of the growth in the quarter of both mobile CPUs and overall shipments was due to a massive increase in entry-level processors such as Intel's Celeron and AMD's "Stoney Ridge" A4 and A6 series, both often used in Chromebooks and low-cost PCs. Many of these are believed to be shipping into the educational PC market. The low-end growth is a continued trend from last quarter. Increased manufacturing capacity has allowed Intel to greatly increase the supply of "small core" processors like Celeron and Pentium."

"AMD did continue to gain share in the server CPU market, with the new Milan processor contributing to the gains while the older Rome core EPYC continued to grow,"

Lastly, in the server segment, AMD continued its growth and climbed to a 7.1% market share in Q4 2020. AMD is clawing back share from Intel at a steady rate and with its 3rd Gen EPYC Milan lineup on the horizon, we will see that momentum continuing in the latter half of 2021.