WRC 6 Review – Rolling Around in the Dirt

Rally games aren't my forte, that much I'm happy to admit. I certainly understand the attraction, racing through the wilderness at insane speeds and drifting around corners that a person running would have to slow down for. It's extreme and requires some of the best control over cars in the world. It also requires a touch of genius, or at least patience. If the instructions given to drivers are anything like those on WRC 6, then they're better people than I am.

For a long time, this niche area of the sport was only covered by a handful of games. However, it's been unusually active over the past few years. Milestone, developers of RIDE 2, developed WRC up until WRC 4 but were then dropped by the publishers. They then moved onto developing Sébastien Loeb Rally Evo. Only this wasn't the main competitor, Codemasters returned with the outstanding Dirt Rally. I can't help but feel a little bad for Kylotonn and WRC 6, there couldn't have been a worse time to release a rally game. 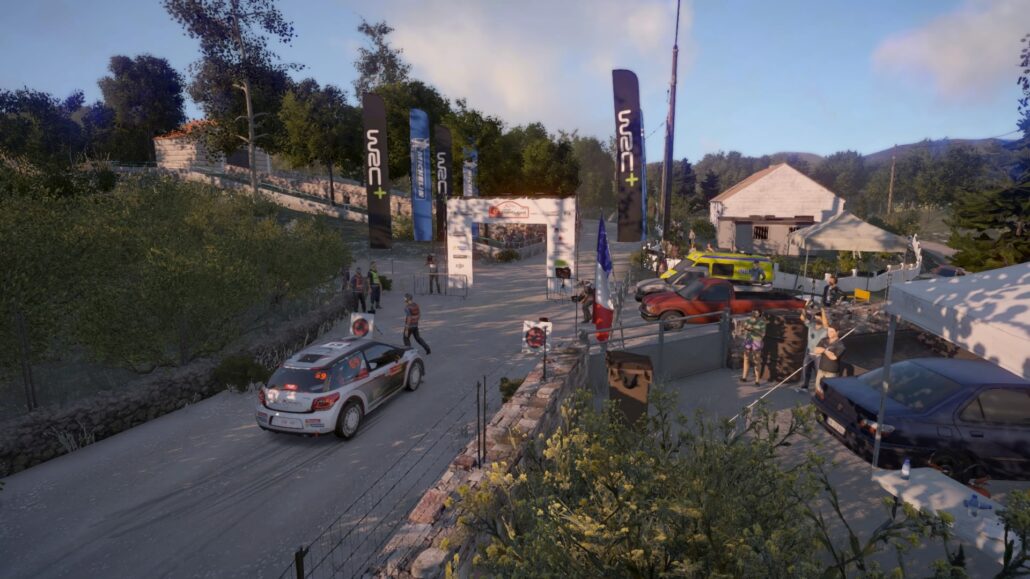 There's one advantage that WRC 6 has over Dirt Rally; it's somewhat suitable for beginners. Or, to be accurate, it's somewhat suitable for people downright rubbish at rally games, like me. Going through the options you have a range of difficulty settings, which is par for the course, but also just how realistic you want the driving to be and what aids you'd like. Honestly, these settings aren't overly extensive but they give you just enough to make you competitive. At least until you hit Barcelona.

Tracks are one of the core features of any sort of racing game and this is where WRC 6 shines. Playing through the career mode will allow you to experience all of the tracks. More than that, you also have them at different types of the day which drastically impact how you drive. Racing during bad weather, on a night, is probably the most difficult the game ever gets. It's also the most atmospheric and teeth clenching time because you can barely see the route.

It's the variety that makes it most effective. Some tracks, like the aforementioned Barcelona, are just so narrow, twisty and awkward that I struggle even in perfect conditions. This is also a complete tarmac track compared to others which are either completely dirt or a mixture of dirt, gravel or tarmac. Tracks also have a good variety of long straights and smooth bends, letting you glide at fantastic speeds as well as tight hairpin bends which, if taken perfectly, will make you feel like a real champion. 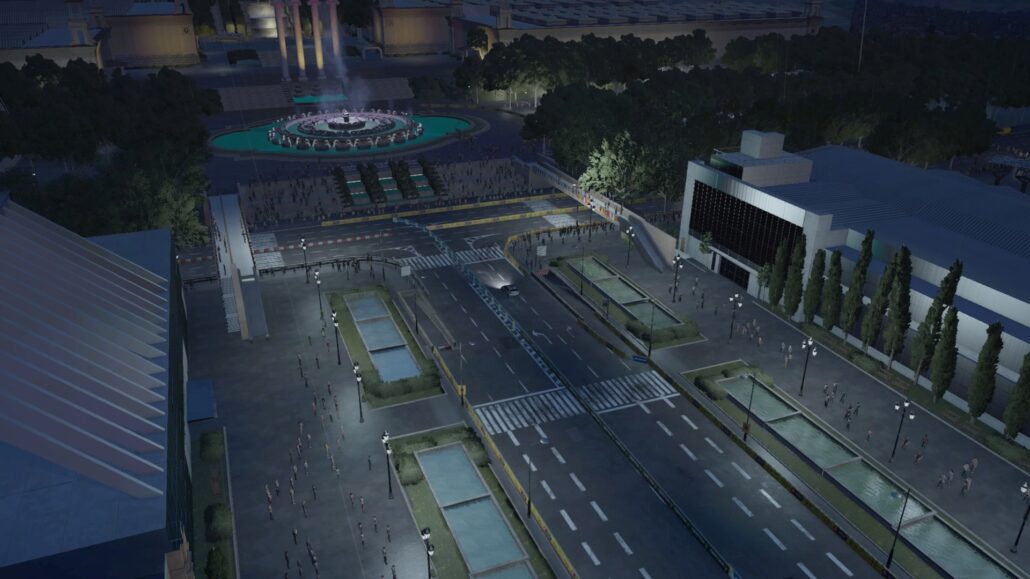 Progressing through the career mode is actually quite extensive, which is nice to see. You start at the lower stage with a contract offer, progressing your way through each rally. It's interesting to experience the stages, gaining and losing valuable seconds towards your final score at the end of a multi-stage round. Thankfully, the game likes to get you into the race, rather than plod through menu after menu. The only two screens you care about are the rankings and the repairs.

During these stages you're going to damage your car, that's a guaranteed. The problem comes with the fact that you're only allowed to repair a car once a day. One repair will take up a set amount of time, which varies by what area you're repairing, and will repair a full block. You're given 45 minutes, rising to 60 minutes per day if you are willing to accept a time penalty in the current round. with limited repairs at that, once a day. Repairing minor issues at the start of a three-race day, to then total it in the first race will set you back massively for the rest of the event.

Outside of the career mode, you have the ability to jump into a quick rally. This lets you drop in on any track and set the time of day and weather to whatever you prefer. It's the best way to quickly drop in and have a bit of fun rallying around. There's also a rally school for anybody as rubbish as me. Outside of those, there's a competitive online mode which pits you against other players. One tasks you to beat times set by other players and climb your way to the top of the leaderboard. The other is a consecutive online rally. This has all of the drivers starting at the same time with the others ghosted, letting you see where they are. If you haven't guessed by now, I wasn't able to win anything! 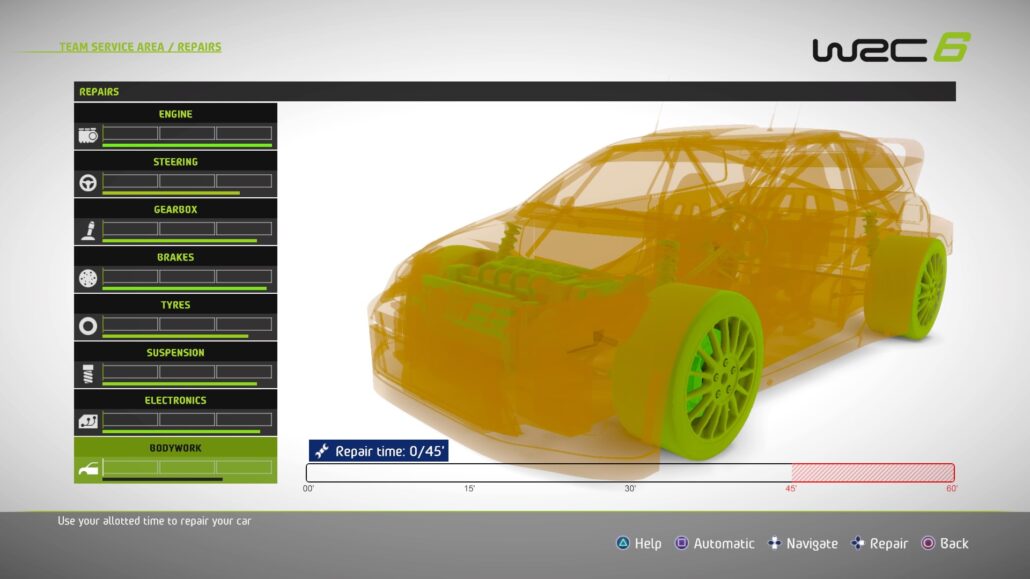 What ends up being disappointing is just how bland the game looks and sounds. The cars are brilliantly detailed and have a reasonable way of showing damage. Combining this with the car getting dirtier, you get to see the effects of the rallies as you progress through. If only the rest of the game look as good, it would be great to look at. Sadly, this isn't always the case. A number of the textures are fairly average at best. However, some tracks are brilliant to look at. Watching the light shine through the trees, look at the beautiful hills of Germany or the built up wonder of Barcelona.

The lack of an engine upgrade is sadly noticeable. WRC 6 suffers from pop-in issues as well as broken lighting at parts, particularly when you're racing at speed. If the game actually starts to get any busier than expected then it really starts to chug. For a modern game, released on this generation of consoles, there's no excuse for a game like this to struggle to maintain 30 fps.

Other minor complaints come from the audio and a few minor gameplay aspects. While vastly improved, the engine still sound far from ideal. You'll get a more realistic sound from simply increasing the volume. The downside from this comes from the fact that then you'll never hear anything from the road. No sound of dirt flying up as you drift around the corner. The sound of a nearby tv helicopter capturing the rally is eerily silent. The only real sounds you'll hear is the sound of the dreaded bush as you crash your car into it.

Crashing into a tree, you'd expect it to be immovable. However, there are little shrubs that happen to be at the edge of the routes you take. Hit these, realising that they're thin enough for a child in a pedal car to break, and you'll come to a grinding halt. They're indestructible. It doesn't particularly help because your assistant is on a completely different track. His notes are abysmal, telling you to go left after you've made the turn. He'll tell you to go wide or not cut in on the wrong corners. Worst of all, he sounds insanely robotic. You can make him slightly more useful by adjusting the timing in options, but it's impossible to make him sound remotely interesting. 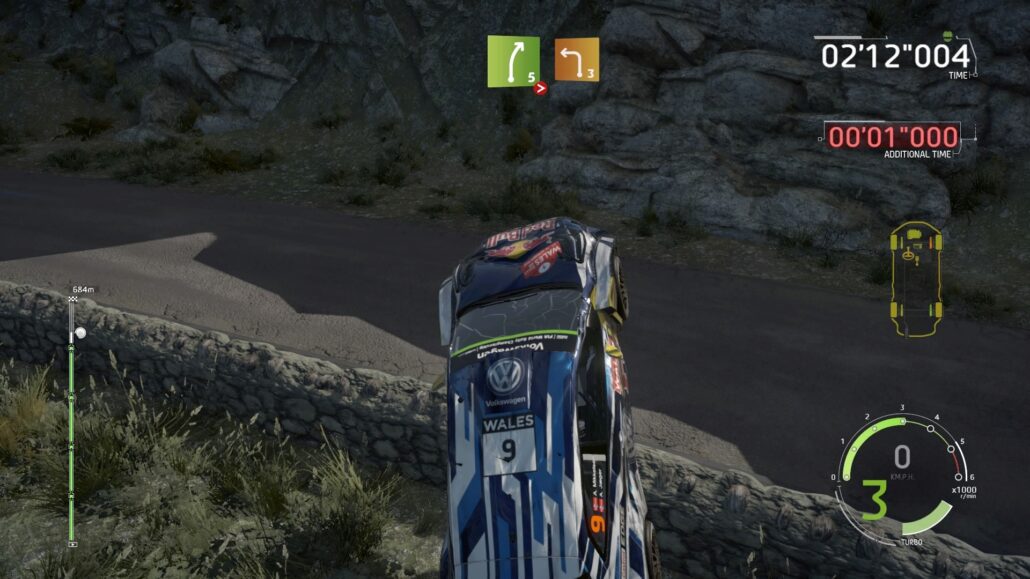 One of the main questions that needs to be thrown at Kylotonn and Bigben is why is the series making the same mistakes? Following a two-year break between WRC 4 and 5, the game made a significant improvement. The return to a one-year cycle has left WRC 6 outshone by Dirt Rally. Aesthetically it's lacking, and during busy scenes it really starts to drop in framerate. There's no real reason for them to have made such a small level of improvement from the fifth iteration. You can tell the core is there. Should Kylotonn release WRC 7 next year, with minor at best upgrades with the self-same issues, it'll fall into the same trap as the Milestone games did.

PS4 version reviewed (copy provided by the publisher). You can buy it for PlayStation 4 and Xbox One via Amazon.

WRC 6 has its positives. It's certainly more approachable than other rally games, but it's simply not improving enough. It's the best of the series but pales in comparison to its major competitor, Dirt Rally.