Ride 2 Review – The Best Two Wheels Has to Offer?

The Yamaha YBR125 Custom is my motorbike of choice. It's ideal for my short hops for work and shopping and it's also a hardy machine, having shrugged off a fall that left my left arm with visible scars even today. But what's this got to do with Ride 2? Well, it's actually helped me decide what my next bike will be as I move up from a 125cc. Ride 2 has the biggest roster of motorbikes to grace a racing game and after the mediocre outing that was Ride, tries the push itself to a new level.

Milestone were always going to do themselves justice with Ride 2. Having spoke to the team when I attended the Gamescom preview, I'm fully aware they know their things about bikes. This love shines through with the attention to detail that has gone into Ride 2. Ranging from the huge number of bikes, the detail placed into them and the variety of modes on offer. There's a lot to cover. 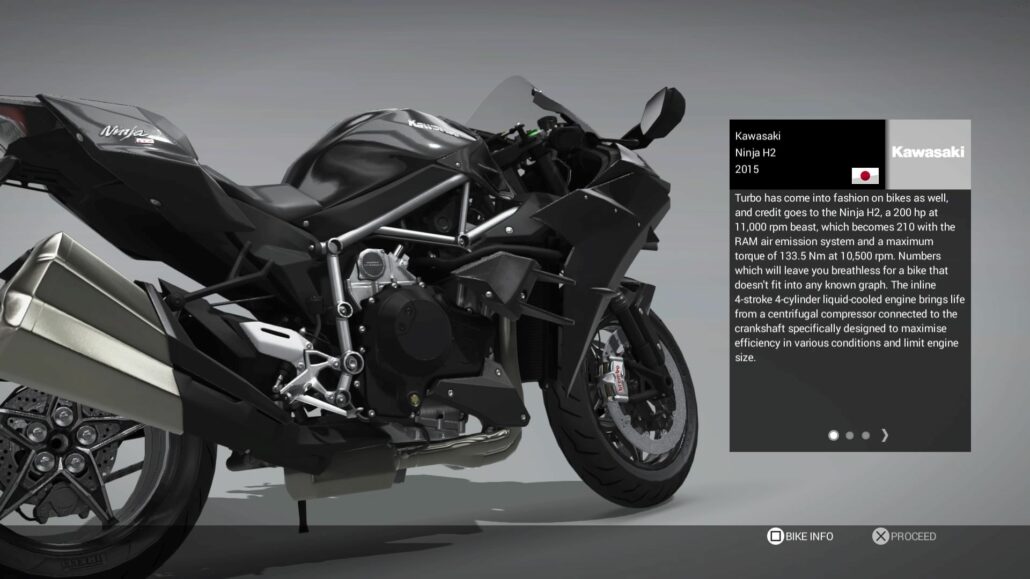 It only makes sense to talk about the bikes in a motorbike game and Ride 2 delivers in spades. With 177 bikes available from 20 different manufacturers on launch, though a large number will require extensive work to acquire, it's a huge variety to choose from. In addition, Milestone have already got DLC up and more planned to give you more bikes to choose from. The alternate liveries and DLC does explain the discrepancy between the 177 available in the game and the 230 touted during Gamescom.

What makes it so impressive is that these bikes all handle and feel different. This is particularly true when you choose more realistic settings, though even going for a more arcade style will give you a challenge. Knowing, or at least learning how the bikes handle will be a key factor to progressing, and enjoying your time with the game. Of course you have to compete with the physics as well. Leaning too much? Time to feel the ground. Go off track? There goes your grip. Take a bump from an opponent or barrier? Time to feel the pain. The bikes all act incredibly realistic in so many ways. Of course the rewind option helps with this in so many ways.

Add to the number of bikes is the huge list of customization options for both your bikes and rider. The obvious options are the performance enhancing upgrades, ranging from better wheels and tyres to putting in a gearbox that lets you alter the settings prior to a race. Other options at your hands are cosmetic, giving you extensive options in making each bike feel like your own. These options also extend to your rider, where you can change the appearance but also the riding style. It all helps, and makes everything feel that much more personal.

All of this is obtainable used from credits gained through the many races and events found in the game, but also sadly directly increased through DLC. I've no complaints at all in games having DLC, even though Ride 2 will eventually feature 16 pieces. However, the in-game credits directly affect how much you have usable against other people online, not just against the AI, then even increasing the amount you obtain at the end of a race through real-world cash is something I'm completely against. 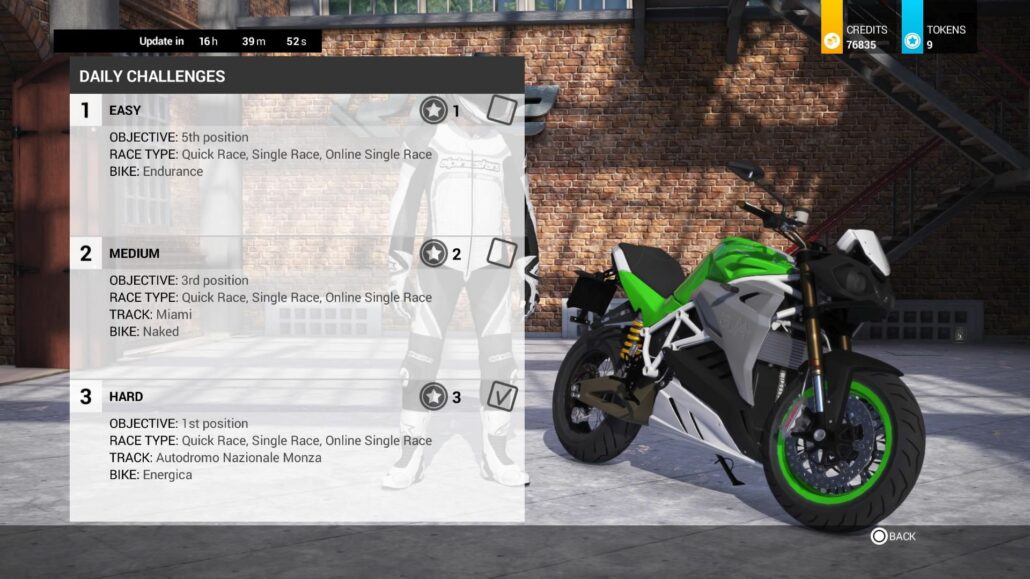 Gaining these credits is the easy part, even without the DLC. Ride 2 features a number of game modes and each and every one of them offer credits as a reward. Your main focus will undoubtedly be the World Tour. Taking place as seasons, where each season has you complete eight races to end the season, which then unlocks an invitational event. The major problem with this mode is that progress is painfully slow. There are four styles, for lack of better term. Each of these styles then has three levels: Amateur, Rookie and Expert. To unlock the later levels you need so many gold medals in the previous levels, and the requirements are time-consuming to say the least. Racing games rarely offer variety, but the grind early on is simply insane.

Other modes include a quick race to simply jump into, multiplayer and also team vs team. The latter puts you in a team of four riders, either other people or AI, to compete against other teams. They all offer you ways to increase your credits and reputation, provided you use the bikes from your garage. You always have the option to loan a bike, which offers zero gains but lets you use anything. There's little reason to do this though, as all you'd be doing is extending the grind to get to the bikes you really want.

Throughout these modes you also have multiple race types. Ranging from a basic type of race, to special objectives like starting at a certain point in a race and trying to capture a particular rider within a certain time limit. Other events include basic time trials, to tracks with traffic cones creating narrow routes on certain areas, taking these out will give you a time penalty and you have to complete a lap within a certain time limit.

Where Ride 2 is trying to keep you interested in coming back for more is with the inclusion of daily and weekly objectives. These reward you with badges that can then be spent on AI partners to join your team for the team races. What is most important for the badges is that they can also be spent on in-game rewards. These include discounts for certain manufacturers, boosts in credits gained from specific types of races and other similar types of rewards. 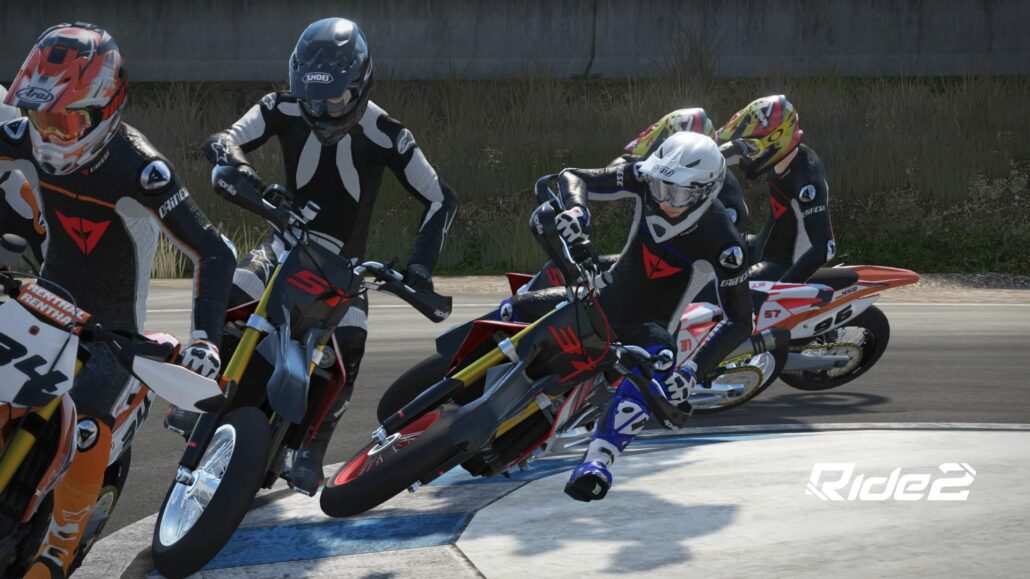 What my time spent with the game has made me realize is that aesthetically Ride 2 hasn't lived up to the expectations I had. The bikes look absolutely fantastic, something I saw and said in my preview. Other than that, well it's genuinely not that appealing. Now, this is from the PlayStation 4 version and the PC version can probably look better, but I doubt it'll be stunning.

The tracks lack detail, surroundings and backdrops just not looking as crisp as they could and shadows have a tendency to pop in and out of existence. Even when the shadows are there, they're not exactly as smooth as they should be. Of course it's a racing game, so the bikes come first and foremost. These are excellent as previously stated, but everything needs to be of a good level to work in tandem and offer that synergy to take a game to the next level.

It's a shame because, unlike the first game, I've found myself considerably more engrossed with Ride 2. It helps that the audio has been significantly improved. Not all of the bikes, but the vast majority have a good sound to them, the oomph behind a powerful engine, or the high whir of your lighter bikes. I wouldn't exactly say they're totally realistic, but certainly better than the previous iteration.

There are issues, that much is certain. I uncovered a few during my hands-on, but none of those reared their heads up while playing now. This can likely be attributed to the whopping 9GB day one patch. What problems the game does have is an average at best AI. The number of times I've seen other riders charge forward, falling on corners that even I have no right falling on. They also don't get penalized for cutting corners that would leave me with a penalty and lose me a race.

All things considered, Ride 2 isn't a bad game at all. Milestone have certainly improved from their last outing and they can genuinely be proud of the way that they're taking their first original IP. They certainly have room for improvement, but the series is on an upward trend, which is always better than stagnation. It's a good game, that much is true. The blemishes and imperfections only make it clear that Milestone need to move onto a new engine to let them take their games to a new level.

Until that day this is the best motorbike racing game available. A huge variety of bikes to choose from, their customization options, a large number of tracks and type of races to experience just set this apart from the rivals. Though, frankly, there are no real rivals to contend with.

Ride 2 is far from perfect, it has flaws with both the visuals and, more importantly, the AI. However, the AI isn't always bad and it doesn't stop the game from being enjoyable. What helps the game is that it has such a huge roster of bikes, extensive customization options and a variety of tracks and race types to experience.