The Ninja Saviors - Return of the Warriors

The Ninja Warriors, a famous arcade title released decades before any sort of television game show hit the airwaves, dropped the year I was born and stunned arcade goers with its triple-screen presentation and linear (in a good way) gameplay. It wasn’t for another seven years before this title was resurrected with a SNES remake, also titled The Ninja Warriors (or The Ninja Warriors: Again in some territories). It’s this latter version that’s been fully redone and modernized for both PlayStation 4 and Nintendo Switch: The Ninja Warriors: Once Again. If you’re reading this from an English-speaking territory, you’ll find it by an even more confusing name: The Ninja Saviors - Return of the Warriors. This full remake of The Ninja Warriors is brought to you by the same team at Natsume that recently revived the Wild Guns classic with another PS4/Switch/PC remake.

This is the part of my review where I’d drop a paragraph or two about the story. However, in the spirit of 80’s arcade games, there’s not much to work with. Working for a powerful force known as Mulk, you’re one of three ninja androids tasked with defeating a violent, technologically savvy dwarf of a man named Banglar. Standing in your one-way path are eight stages of robots, ninjas, robotic ninjas, paramilitary, and all the action you can muster in a single night. The Ninja Saviors -Return of the Warriors truly needs no grandiose storytelling and players should look forward to beating this action game in more way than one.

The kings of the belt scrolling genre of action games, whether they’re from Capcom, SNK, or the Streets of Rage series, all feature a similar vantage point: horizontally scrolling stages with the ability to walk up and down the plane of view in order to punch and kick everything in your way. What separates The Ninja Saviors from those contemporary masterpieces is in how it eliminates every direction except for moving left and right. By keeping the action focused on a single plane, enemies can both stack up against the player and get knocked into one another during flashy combos.

By eliminating the depth to the field of combat, The Ninja Saviors - Return of the Warriors doesn’t reduce the depth of gameplay in any way. In fact, The Ninja Warriors was lauded for how each of the three original characters had a much wider range of attacks than most other brawlers of its time. Characters can weave in regular attacks, crouch down, jump, weave in throws into the middle of combos or expend some or all of their battery gauge for character-specific special attacks. The two new characters to The Ninja Saviors, Yaksha and Raiden, each come with their own unique gimmicks and tools to take to the one-way streets.

Arcade gaming’s biggest challenge has been to clear a full game on only a single quarter or 100-yen coin. If you look to any retro action game, they were designed to convince the player to keep pumping money in if they wanted any shot of making it all the way through to the end. With The Ninja Warriors (and subsequently The Ninja Saviors - Return of the Warriors), this belt action brawler was both fair in its enemy density and frequent health recovery items, at least on Normal Mode. Depending on my character, I could consistently make it through a majority of the stages on but a single credit and truly rookie mistakes kept me from achieving a perfect run. Being able to block attacks, something still rare for a belt action game, heavily contributes to staying alive.

ZUNTATA’s perhaps most famous musical track of all time, Daddy Mulk, had its roots as the first stage theme of The Ninja Warriors and remained as the single most memorable part of this title for decades, at least from personal experience. To withhold such a notable track from the player’s first playthrough of The Ninja Saviors feels like a severe misstep. It isn’t until you finish your first run through all eight stages that the opportunity to change up the soundtrack opens up and Daddy Mulk can finally be heard in all its chiptune glory.

Finishing up a full playthrough of The Ninja Saviors does more than just unlock new tunes to battle to. Two new robotic warriors are at your disposal to do one-way battle with, but they don’t both come as a pair. The first finished playthrough unlocks Yaksha, while the next playthrough (on Hard Mode, which doesn’t unlock until you beat The Ninja Saviors on Normal anyways) unlocks Raiden. Both offer radically different playstyles beyond the original three warriors. Raksha’s arms can be extended for lots of grab and throw shenanigans in the midst of your combos while Raiden is unmistakable as the largest character in the roster. While his size and hitbox are equally imposing, he can be just as effective at clearing out hordes of enemies as his smaller counterparts.

The Ninja Saviors - Return of the Warriors has a distinct level of presentation that holds up even by modern standards. Character sprites all look great on a high-resolution display and the action is fluid without any noticeable slowdown in more hectic encounters. For a $20 title, seeing the entire work of the SNES title redone for modern consoles is a nice touch, rather than what some publishers consider to be a modern release with letterboxing and the occasional CRT filter. The Ninja Saviors doesn’t offer any extras like concept art or video playthroughs, but the digital PS4 release otherwise feels like a complete package with more than enough game to enjoy for a single Jackson.

With the recent resurgence of seeing classic SNES-era arcade titles remastered for modern consoles, The Ninja Saviors - Return of the Warriors is but one of what’s sure to be a growing genre. However, as one of the forerunners of the belt action genre, fans owe it to themselves to dig into what still holds up as one of the greats. What you get above and beyond the 1994 release is a clean presentation, two new characters and another couple hours with a truly timeless classic. 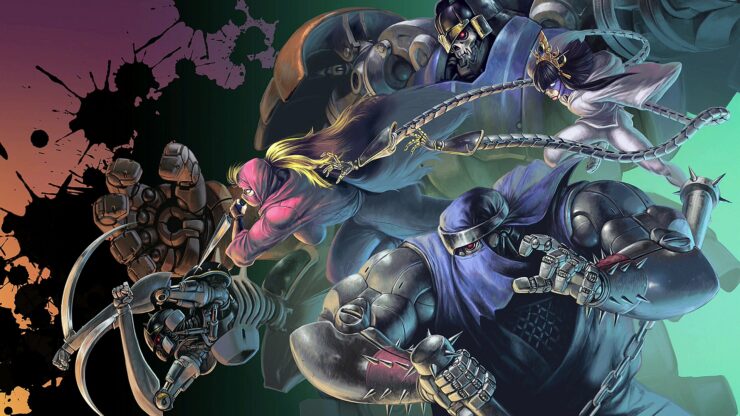 8.0
Wccftech Rating
The Ninja Saviors - Return of the Warriors

The Ninja Saviors needs little introduction, proving to be as faithful to the SNES classic as one can get. The updated presentation and new characters make this a one-way trip worth playing once again.