Long before I could stroll stand up and even look upon the marquee of The Simpsons arcade game at the local pizza shop, Taito has been making its own style of shoot'em up with the Darius series. Born from the same arcade cabinets that could house The Ninja Warriors and three monitors linked end to end, this shooter series left its own mark on the arcade lineup right alongside the likes of Gradius and Thunder Blade. Now, brought together for the first time that many players will be able to get their hands on some of these original Darius works, the series has been published together in a pair of anthologies dubbed the Darius Cozmic Collection Arcade and Console. For this review, I'm taking a look at the first half: Darius Cozmic Collection Arcade.

The pair of Darius Cozmic Collection anthologies feature the same premise: a compilation of Darius shooters brought together in a single package with emulation and porting by M2, the same powerhouse team that's been releasing SEGA AGES titles on Nintendo Switch to great acclaim. In the Arcade collection, both Darius and Darius II get a number of releases that most players might not have known ever existed. Now that they're on a home console not designed to take your quarters, the reworked versions of Darius have been fixed to be more forgiving to players that upgrade the SIlver Hawk's arsenal early on. In addition to the unique route design of each playthrough, the games have a hidden ranking system that makes them more difficult with bosses having more health the better equipped the player gets. This system is well designed for players targetting a one-credit clear and trying to finish up the final zone after losing your powered up laser and bombs can sometimes be a near-impossible feat.

If Gradius is the main space shooter you're familiar with, Darius will feel right at home. Both games feature a similar upgrading system by collecting items dropped from select ship formations. While Gradius allowed the player to invest the nodes across an upgrade track, Darius automatically invests the upgrades for the player. With no speed boosts to upgrade towards, the Silver Hawk's arsenal is upgraded in a different way. Through collecting red, green, blue and other colors of powerups, the ship will have its missiles, bombs and shield upgraded in addition to other lasting benefits. Weapon upgrades follow a predetermined path and often it takes a number of upgrades to transform the player's missiles from a pea shooter to a massive laser cannon and beyond. Dying typically won't send the player back to the beginning of a zone but it will force them to carry on the mission with no or reduced armaments. In later stages, this can almost assuredly mean a death sentence if you aren't liberally using the quick save feature every five seconds. Darius Gaiden takes this a step further with adding in consumable black hole bombs that clear the screen of enemy bullets, thus possibly saving a life.

Darius is a bit different than other shmups because while Darius focuses on being more offensive and clearing out enemies before they get a chance to shoot, there aren't any bonuses for doing so. Many danmaku or 'bullet hell' shooters give the player a bonus for just barely grazing past a bullet, usually in the form of increased score or damage. Darius, on the other hand, is about rote memorization of enemy attack patterns and knowing how to navigate the Silver Hawk safely around. What fans might take some time getting used to is that the entire body of the Silver Hawk is a hitbox; clip a wing against the floor or ceiling or weave too closely to an enemy bullet and you're bound to crash and burn. Without the right positioning, some fights are impossible to go through without the aid of a temporary shield and stockpile of extra lives.

Being presented in their original widescreen format, the Darius Cozmic Collection titles feature a heavy amount of letterboxing to keep the original aspect ratio intact. This isn't all empty space and static wallpaper surrounding the screen, however. M2 has made use of the extra screen space to give the player informative readouts about the game, such as tracking their current upgrade levels, something that isn't immediately visible to the player in game. Boss health levels and the upcoming route choice is also presented clearly to the player.

Reworking anything from original LCD ant television hardware and bringing it onto an HD console can always be a tricky affair but M2 has once again proven themselves more than talented at trying to make these games as 'arcade perfect' as possible. There is a minimal amount of slowdown during the more frantic sections of Darius II but for games like Darius Gaiden, I could swear that it felt smoother than the original arcade release. A small amount of input lag is present, putting the collection in line with the recent PlayStation 4 release of Ikaruga and others. Regardless, this is still one of the smoothest releases of Darius II I've seen in a long while.

Of the two Darius Cozmic Collections, the Arcade compilation is the worse value proposition. Despite the various versions of Darius and Sagaia included, you're only getting seven titles as opposed to nine in the Console collection. This issue is further impacted by looking at the seven titles included and realizing that ultimately, you're getting three Darius games: Darius, Darius II and Darius Gaiden. The two versions of Sagaia included are both loose conversions of Darius II that had a large number of bosses and routes taken out for a more streamlined experience. Sagaia's second revision was quite a rarity among arcade collectors and I didn't even know there was a variant board until I saw it included within the collection.  It's Darius Gaiden that steals the show and stands out as the best Darius title in the collection with the modern aesthetics being the closest to more recent Darius titles like 2015's Dariusburst Chronicle Saviours.

That isn't to say that the Darius titles that did make the cut in this collection are bad games by any means. Darius was a very influential shooter during the Taito era of the mid-'80s and seeing it represented with three versions of arcade improvements is a big deal for long-time fans of the series. All three variants of the original Darius arcade release are feature the signature three-monitor display, stretched out to fit your standard widescreen display along with a creative use of letterboxing, more on that in a bit. Darius II and the Sagaia titles, on the other hand, are based on the two-monitor cabinets.

For some inexplicable reason, Darius releases always seem to command a higher price tag than any other shooter on the market these days. The Darius Cozmic Collection is a premium package for what you pay for even though it might be the best way to play the first few Darius titles outside of owning a three-screen arcade cabinet. What M2 has produced is a timeless collection of shooter classics and I certainly hope to see more of these hidden gems in the future. 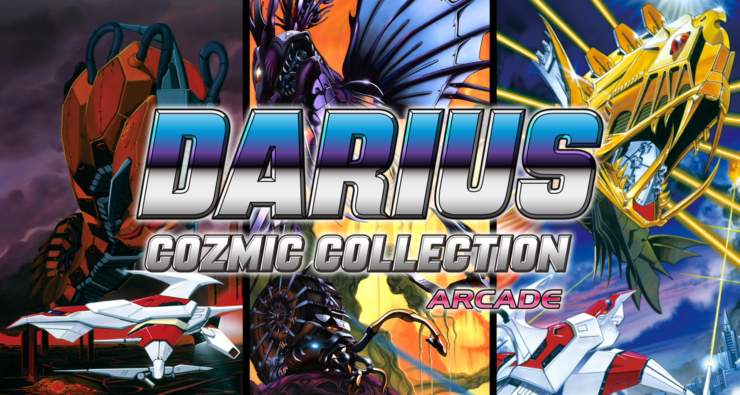 Darius Cozmic Collection Arcade is a rock solid collection of Taito classic shooters in one package that can be listed more premium than casual fans may be willing to pay.