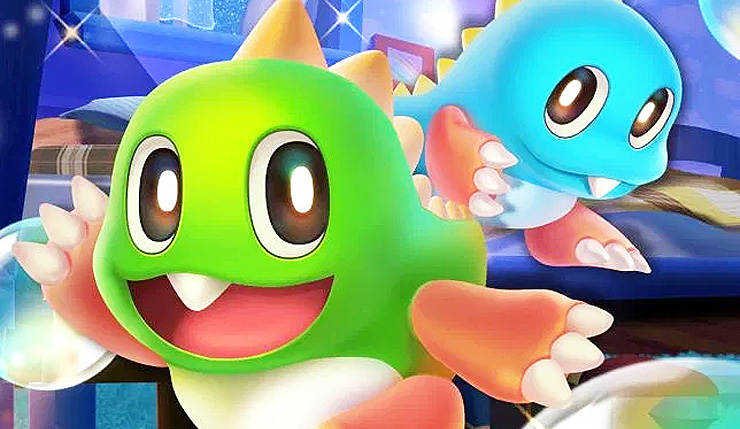 The Nintendo Switch is become somewhat of a haven for neglected old-school action franchises – the system launched with a new Bomberman title, and now Taito has announced Bubble Bobble 4 Friends is coming to the system. As the name implies, the new Bubble Bobble will deliver adorable dino platforming fun for up to four players (the series has traditionally only supported two-player co-op).  You can check out a trailer for Bubble Bobble 4 Friends, below.

The game isn't exactly a cutting-edge visual showcase, but as a long-time fan of the series, I’m still looking forward to Bubble Bobble 4 Friends. The game is being developed internally at Taito, who have had a good amount of success with these kind of retro revivals in the past, so there’s reason to be optimistic. Here’s the official rundown:

As in the previous highly popular series, the thrilling and epic bubble fight starts again! One night, a child’s room became engulfed by a miraculous light and every object under its rays suddenly came to life - including the child's most favourite toy, the little dragon called Bub. Full of jealousy, the wicked magician Baron von Blubba challenges the friendly dragon to battle.

In the '80s and '90s, the players jumped through the levels either solo or in the two-player mode. In the new part of the popular Bubble Bobble series, a 4-player cooperative mode is integrated, providing even more fun with friends. This is the first internally developed title since Taito has re-entered the consumer market, and the development team is thrilled to be working on this famous IP.

Interestingly, Bubble Bobble 4 Friends is the relatively rare game that will release in Europe first, as the series is most popular there. The game launches on Nintendo Switch in Europe on November 19 with a North American release coming sometime in early 2020. Ready to get bubblin’ again?