Gorram it, something about space cowboys is just immediately exciting, isn’t it? Rebel Galaxy Outlaw is a space sim that sits somewhere between Elite Dangerous, No Man’s Sky, and something else entirely. It doesn’t have all the bells and whistles of a super-serious simulation of space trading, nor the universe-spanning exploration, but it has a solid theme and a killer soundtrack. Players take on the role of (name) and complete jobs, explore the stars and generally do whatever they want.

The design of the game will be familiar to anyone that has played a space game since the original Elite came out. Explore space stations and outposts through menus and artwork, then go out into the black to enjoy six degrees of movement in fast-paced dog fights. But while there is an overarching theme that permeates every part of Outlaw, none of the different space stations stand out from one another really, they’re all seemingly cut from the same cloth. Maybe it's because of No Man’s Sky and Outer Wilds, but the big dark void just wasn’t as enticing to explore this time around. Each star in the sky was just a dot on the backdrop, and each objective was just a mission marker. Clearly, Outlaw was never set out to be something like that, but with such beautiful, exciting spaces explored recently, it's hard not to compare.

Like other space games, Rebel Galaxy Outlaw doesn’t do much to hold your hand. You’ve got a main quest as it were, but even then it lets you get to grips with everything on your own with little to no instructions. For those with plenty of time spent among the virtual stars, it's easy enough to get to grips with, but newer players could probably enjoy a little more onboarding. Outlaw is also quite difficult, space battles can happen suddenly and while the game does have a pop up to say that you might not survive difficult encounters (because it's very hard to tell what you’re up against from the cockpit) spotting that amidst the rockets, lasers and alarms is no easy feat.

That being said the controls are easy enough to get a handle on when it comes to fighting, even if you have less to play with than Elite Dangerous’ power management. If you like the typical space warfare you’ve played in every space game since Rogue Leader, you’ll enjoy this. The lock-on system also means you'll find it much easier to track the little dots of enemy ships than in other games, too. Most of your time is spent in large, swooping circles trying to get your laser just in front of the nose of the enemy ship to do a bit of damage.

There’s a lot of hidden systems in Outlaw, things that I swear the game never tells you about, so I don’t want to spoil too much here. I will say that when I found out the game basically had Photoshop inside it so you could customise your ship’s paint job to your heart's content, I lost a lot of hours simply playing with various logos, colour palettes and homages to other games. It’ll be nice to see what unique ships other players can come up with. But this is strictly a single-player experience, so I’ll be looking to Reddit, not the stars, to see what they can create.

The storyline in Rebel Galaxy Outlaw has its moments. It was interesting seeing such a linear tale told out in space these days. Having lost your partner to some fur-coat-wearing, you’ve gone all John Wick in space and have come out of retirement to get some old school revenge. But even the more interesting characters you meet along the way suffer due to the flat script. Your first real mission in the game has Juno say, more than once, how she knows it's a bad idea but will do it anyway. Not only is it clichéd, but hearing it over and over in the same conversation makes the shallow attempt at foreshadowing all the more tedious.

Of course, when mission objectives are simply to go to this random location in space and kill the baddies that show up, the overly long conversations feel a little unnecessary as well.

Star Citizen ‘Star Marine’ FPS Module Delayed, Not Up To Their Standards Yet

But the soundtrack mostly washes the bad taste out of your mouth. Whatever little ship you’re whizzing around in, you’ll get space radio. The radio plays some funny ads, but mostly it plays, and I’m no music expert here, some sort of country/blues music that fits so well within the cramped little cockpit. It also makes the travel much more bearable, or at least it did for me. I found Elite Dangerous challenging to bear with mainly due to the long, quiet treks between planets. Rebel Galaxy Outlaw also takes a while to travel anywhere, but the radio more than makes up for it.

I don’t think Rebel Galaxy Outlaw will change anyone’s mind about space games. The game is a fun adventure through the dark beyond but doesn’t feel like it does much new with the setting. It's not nearly as ambitious as Star Citizen or as complex as Elite Dangerous; it's not as explorative as No Man’s Sky or as whimsical as Outer Wilds. It's a combat-heavy space game with a good soundtrack, interesting ideas and quite a lot of hidden systems. 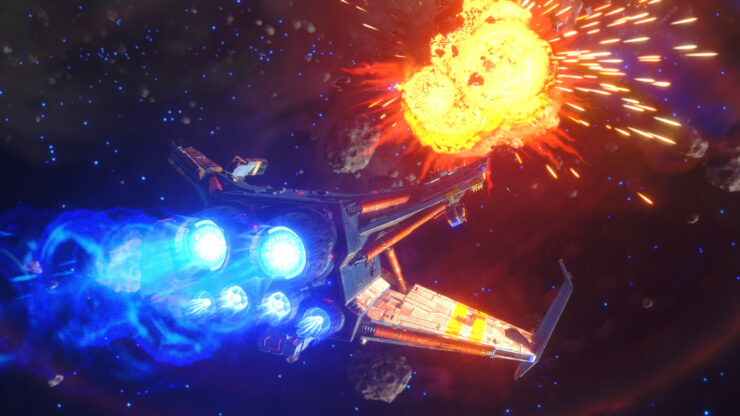 Rebel Galaxy Outlaw is a fresh coat of paint on a genre on a tired genre. While it's fun enough to play, though, other games have already revolutionised what this game seeks to improve upon.