What if The Legend of Zelda: Majora’s Mask took place across an entire alien solar system? That’s essentially the premise of Outer Wilds, a new spacefaring adventure that tosses players into a time loop and asks them to solve an interstellar mystery in the brief 20 minutes before the sun goes supernova. No pressure, right?

Outer Wilds’ concept is certainly an attention grabber, but is it too ambitious for its own good? The game, which was the first successful project to hit the Fig crowdfunding platform, has been in development in one form or another since 2012. Sometimes long development cycles turn out for the best, but often they can be a sign of trouble. Is Outer Wilds a successful launch or is it lost in space? Let’s find out… 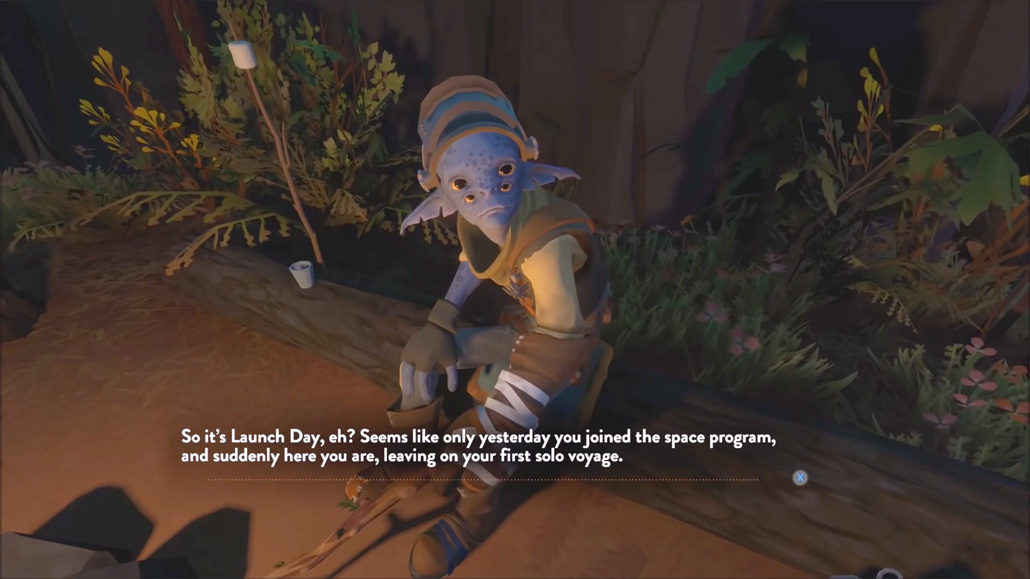 Outer Wilds casts players as a rookie astronaut from the backwater planet of Timber Hearth. Despite their humble circumstances, the Hearthians somehow got a space program off the ground and have begun exploring some of the local moons and planets. The system was once inhabited by a technologically advanced race called the Nomai, and just before you take your first flight you have a weird bonding moment with one of the lost civilization’s statues. The Nomai are seemingly the key to everything – their statue locks you into the deathless time loop and their various relics and writings scattered across the system are the key to understanding why the sun is exploding, and potentially a whole lot more.

When you blast off for the first time, you’re not given much guidance. The game does suggest you go to a specific planet in order to find one of your fellow astronauts, but you don’t have to. Outer Wilds is actually completely open ended – you can beeline directly to the end of the game if you want, although good luck finding your way there blind. The mystery of the time loop and supernova are there to entice you forward, but you can just bum around the game’s six planets and various moons at your own pace if you want. I suggest you do, as this game is at its best when you’re just playing space tourist. 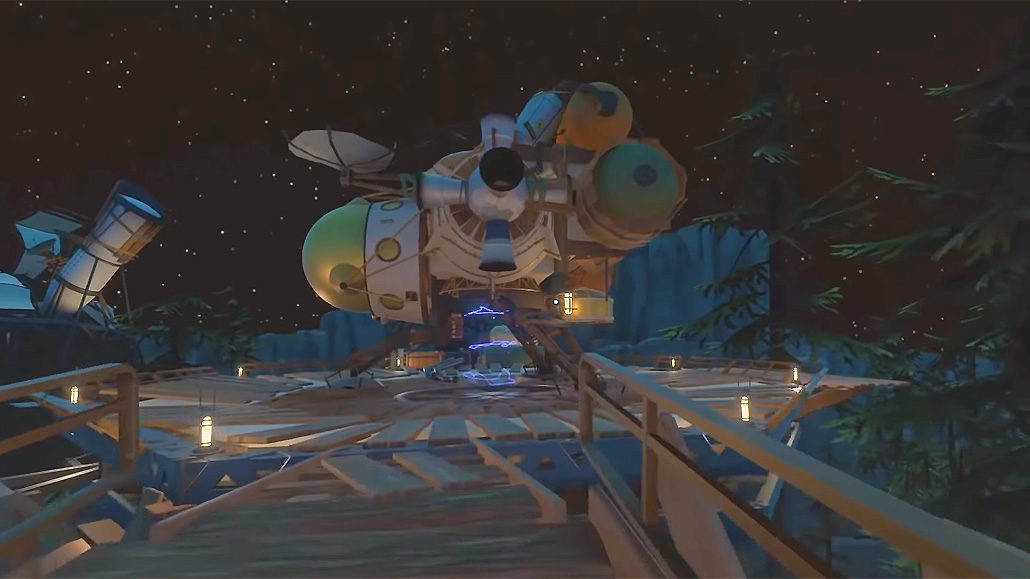 Outer Wilds’ solar system is completely seamless, with players being able to take off from one planet and land on another within minutes without a loading screen in sight (interestingly, nothing is more than a few kilometers apart, implying the game takes place in an adorable pocket-sized system). The planets themselves are wildly varied and inventive – one is covered with floating islands that are regularly hurled into space by massive roving tornadoes, while another pair of planets function like a giant hourglass, with sand transferring from one to the other in real time. And that’s just the tip of the intergalactic iceberg! Outer Wilds’ visuals won’t knock your socks off on a technical level, but each planet has its own unique look and feel. Whether you’re exploring relics while a blazing sun seemingly looms only feet away or plunging into the murky interior of a living planet filled with giant killer anglerfish, this game serves up some truly striking moments.

The Pathless Review – A Trail Worth Sticking To 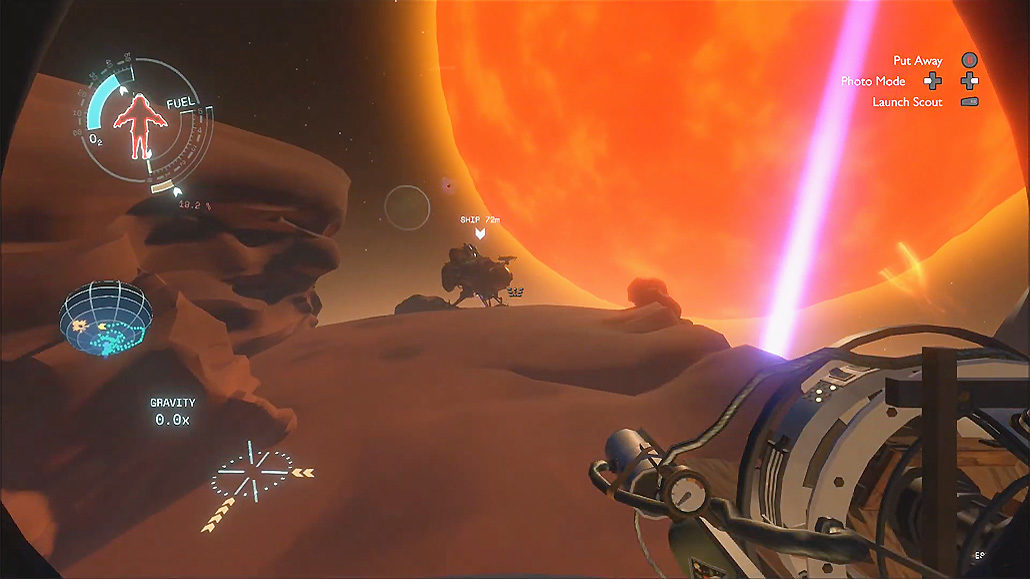 None of the Outer Wilds’ planets are very big, so you usually don’t have to wander far before you stumble upon something of interest. A fellow Hearthian traveler, an abandoned Nomai ship, or something else. Whatever your run across will likely provide you with just enough new information to keep you hooked. Back at your ship, all clues and information you find are recorded by your computer and arranged into a nice, easy-to-read web. Besides being satisfying to add to and expand, this web ensures you’re rarely at a loss about where to go next. Outer Wild’s story unfolds at a nice pace, and the game does a great job of making its dinky planets (the surface of all of them would barely fill the corner of an Ubisoft open world map) feel big, complex, and mysterious. There’s a constant feeling of escalation as you work your way through the game, culminating in a satisfyingly trippy ending. You’re going to be spending a few minutes pondering this one after the credits roll.

Based on what I’ve written so far, you may have the impression I’m really in love with Outer Worlds, but sadly, that isn’t quite the case. Make no mistake, the game is a unique experience, and quite absorbing at times, but its moment-to-moment action is often more frustrating than fun. Your spaceship is an unwieldy beast, and once outside of it, you’ll be cursing your awkward jumping and jetpack controls. There doesn’t seem to be any getting used to the controls either, or at least there wasn’t for me. I was still regularly crashing my spaceship a dozen hours in. Outer Wilds’ controls are easy enough to forgive early on when you’re still just poking around, but later on the game serves up some surprisingly demanding flying and platforming challenges. Of course, dying just resets the loop and it doesn’t take more than a few minutes to return to anywhere in the game, but still, the repetition begins to grate. 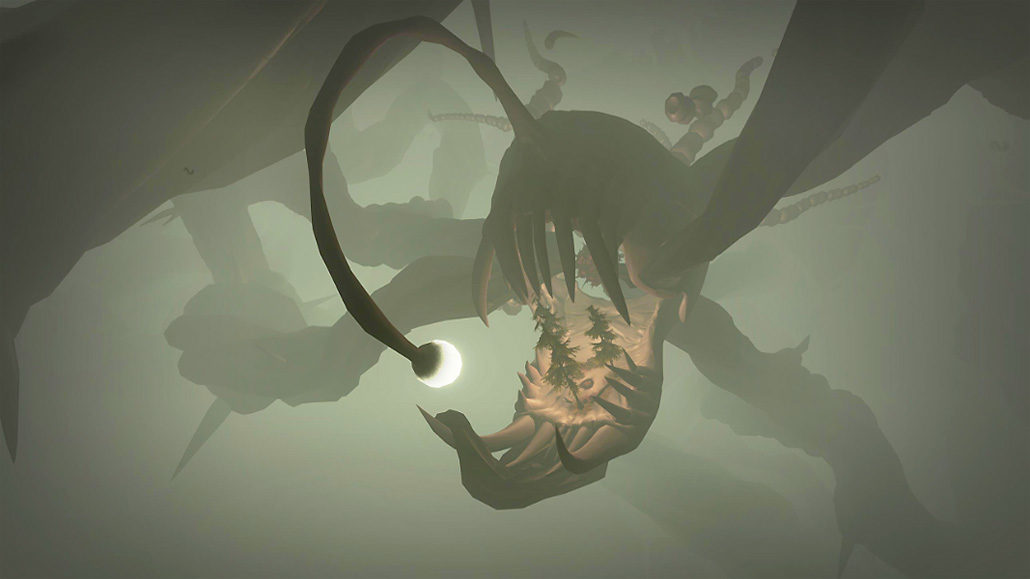 Outer Wilds’ puzzles ride a fine line between rewardingly challenging and too vague for their own good. Thankfully, your abilities are pretty limited – you have a scout robot you can attach to things and take pictures with, an audio scanner, and a universal translator – so things usually don’t get too complicated. Most of the time, the solution is right in front of your face. That said, there are some puzzles that require you to be in specific places at very specific times that require a too much trial and error.

Ultimately, Outer Wilds is a game that made a great first impression, but wowed me less the longer I played. The irritating deaths, obtuse puzzles, and glitches (of which there are many) began to wear on me. It took me around 15 hours to finish Outer Wilds, at which point I was pretty content to hang up my space suit and leave the final frontier behind me.

This review was based on a PC copy of Outer Wilds provided by publisher Annapurna Digital. You can purchase the game now from the Microsoft Store.

Outer Wilds gets most of the “big picture” stuff right. It boasts a solid structure, wonderfully imaginative planets, and an involving slow-burn mystery. Unfortunately, clunky controls, a few irritating design choices, and a multitude of other little issues bring the game back down to earth. If you value originality over execution, Outer Wilds is worth the ride, but expect some turbulence.