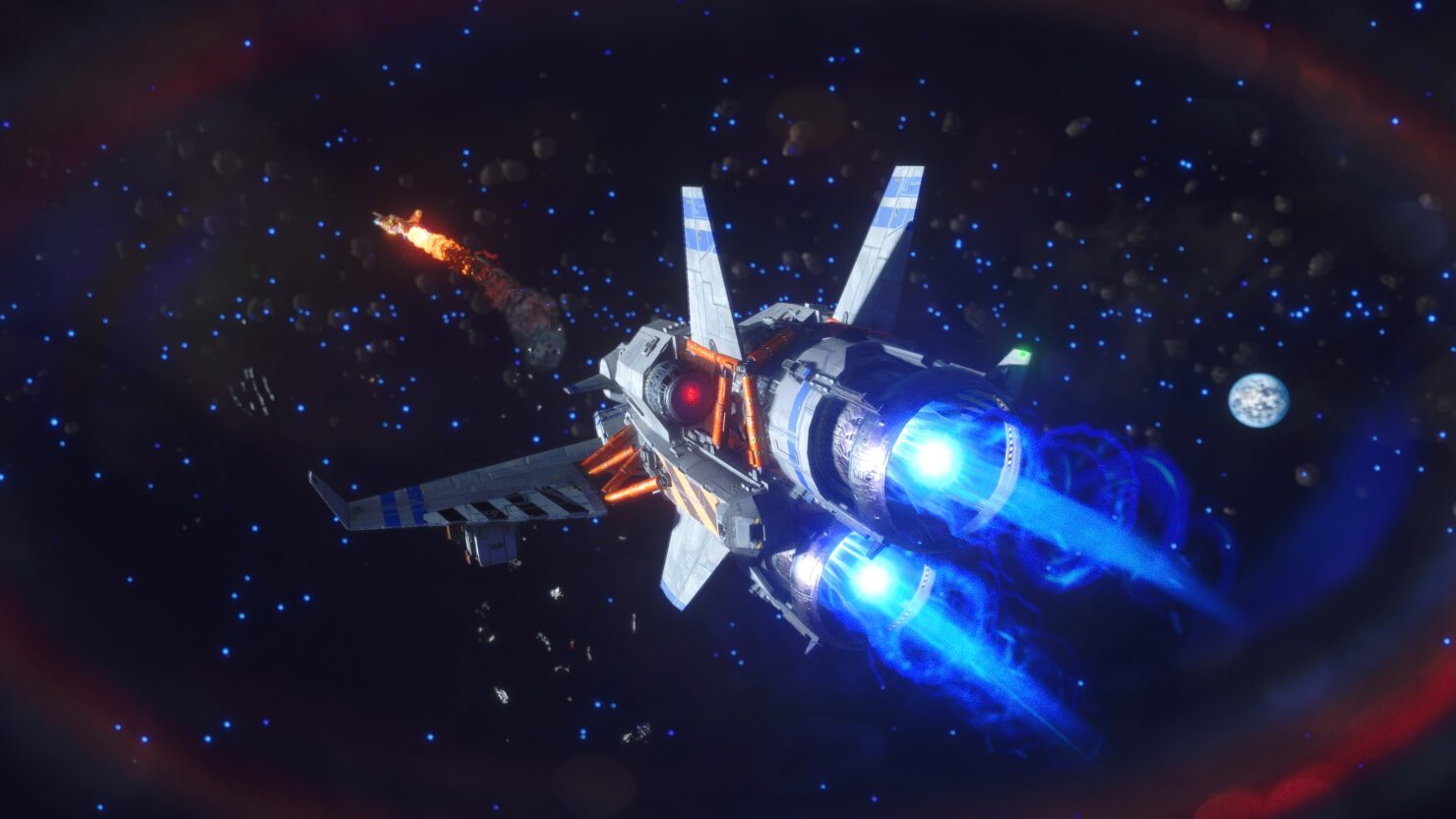 Double Damage Games announced Rebel Galaxy Outlaw, a prequel to 2015's Rebel Galaxy. Set 34 years prior the events of the first game, it will take place in a series of star systems closer to Earth.

This has got to be the most ambitious game I’ve ever worked on. We took what worked from the last title, and then went a little crazy. It’s got a stronger focus on story and place, a huge jump in detail, and while it still works great for folks with a HOTAS at home, I think we’ve managed to make space combat accessible and fun for everybody else in a way that nobody has managed before. We’ve got a lot more to share in the months ahead.

Double Damage also shared the game's main features, a gigantic gallery of screenshots and a trailer. Take a look below.

Crank the volume Chamber another round and burn like hell

Out of cash, out of luck, out on the fringe. Juno Markev has a killer to tail, a debt to pay, and more trouble headed her way. In the Dodge Sector it's hard to get by - and even harder to get even.

Last Chance on the Final Frontier
Back Into the Life...

Juno Markev was an outlaw and smuggler who went straight and settled down, until her husband was murdered on what should have been a simple shipping run. She's on the trail of the guy that did it.

Things don't go as planned, After an encounter in a shady watering hole goes bad, her ship is destroyed. She finds herself in debt to an old friend and casino owner who gives her a rustbucket and some words of advice.

Time to dust off and take another swing.

Rebel Galaxy Outlaw takes place in a greasy, blue-collar world of outlaws, truckers, cops and thieves. Nobody's saving the universe around here. They'd settle for saving their own skin.

Slide into your cockpit, switch on the Subspace Radio and listen to one of 7 stations with over 21 hours of music, DJs and commercials.

Drop by a seedy dive bar and play a round of 8-ball or dice poker for credits or gear. Or just sweat a few rounds of StarVenger. But don’t waste too much time, those Tachyon Lasers aren’t going to buy themselves.

Some people are preoccupied with realism. We are preoccupied with explosions. Pulling hard turns and raking the hull of your target with 45mm lead while fire billows from their engine housing. Dragging a cluster of magna-mines into an imposing pirate cruiser. Seeing the glass crack on your windscreen as a minitorp detonates just off your port side. Flaming and sparking debris tumbling into the black. That's our thing.

Let's face it, space sims have always had a bit of a problem. Six degrees of freedom means lots of folks end up lost, and half the time you're spinning in a circle trying to find an angle on a deeply unsatisfying space joust. We think we've got a pretty good solution to that. Every ship comes with an autopursuit mechanism which can be engaged at will to get your target onscreen. Spend your time fine tuning your weapons lead and dodging wreckage, not spinning in circles like an idiot.

The focus here is on getting where you want, shooting what you want, and not having to screw around.

Gamepad is best, but Mouse & Keyboard work fine. And for you HOTAS-wielding folks and hardcore old-schoolers, there's a mode for you too, with none of the assists.

Slap down the credits for a ship that suits you best. Upgrade your scrappy junker to agile interceptors, big capacity long-haulers, or high-performance military-grade fighters. All have custom cockpits and loadout options.