Let's take a trip down the journey to Ampere. In 2016, NVIDIA announced their Pascal GPUs which would soon be featured in their top to bottom GeForce 10 series lineup. After the launch of Maxwell, NVIDIA gained a lot of experience in the efficiency department which they put a focus on since their Kepler GPUs. Two years go, NVIDIA, rather than offering another standard leap in the rasterization performance of its GPUs took a different approach & introduced two key technologies in its Turing line of consumer GPUs, one being AI-assisted acceleration with the Tensor Cores and the second being hardware-level acceleration for Ray Tracing with its brand new RT cores.

With Ampere and it's brand new Samsung 8nm fabrication process, NVIDIA is adding even more to its gaming graphics lineup. Starting with the most significant part of the Ampere GPU architecture, the Ampere SM, we are seeing an entirely new graphics core. The Ampere SM features the next-gen FP32, INT32, Tensor Cores, and RT cores. 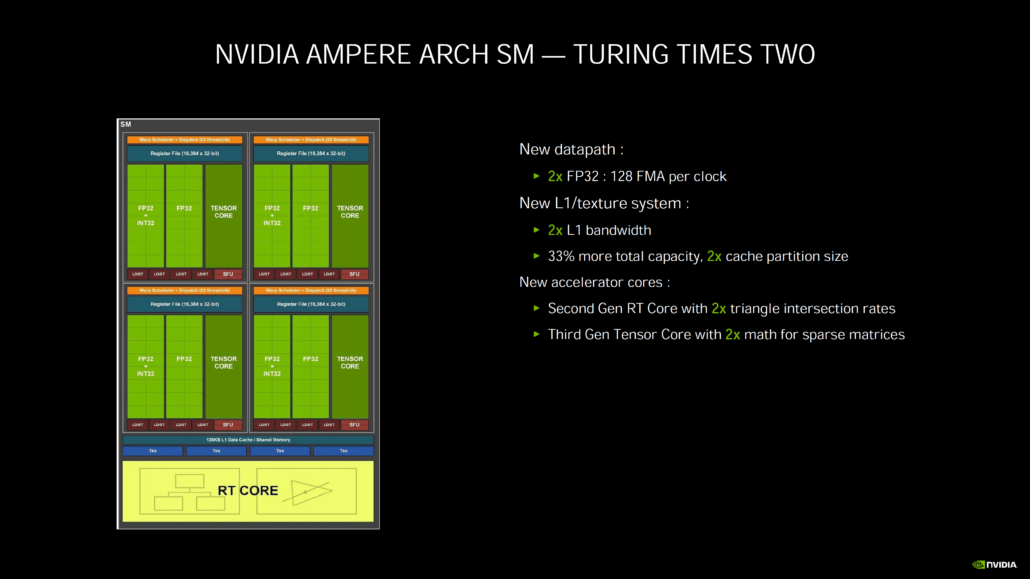 Coming to the new execution units or cores, Ampere has both INT32 and FP32 units which can execute concurrently. This new architectural design allows Turing to execute floating-point and non-floating point operations in parallel which allows for higher throughput in standard floating-point operations. According to NVIDIA, the updated Ampere graphics core delivers up to 1.7x faster traditional rasterization performance and up to 2x faster ray-tracing performance compared to the Turing GPUs.

The Ampere SM is partitioned into four processing blocks, each with 32 FP32 Cores, 16 INT32 Cores, one Tensor Core, one warp scheduler, and one dispatch unit. This is made possible with an updated datapath with one data path offering 16 FP32 execution units while the other offers either 16 FP32 or 16 INT32 execution units. This adds to 128 FP32 Cores, 64 INT 32 Cores,4 Tensor, 4 Wrap Schedulers, and 4 Dispatch Units on a single Ampere SM. Each block also includes a new L0 instruction cache and a 64 KB register file for a total of 256 KB register file per SM.

Doubling the processing speed for FP32 improves performance for a number of common graphics and compute operations and algorithms. Modern shader workloads typically have a mixture of FP32 arithmetic instructions such as FFMA, floating point additions (FADD), or floating point multiplications (FMUL), combined with simpler instructions such as integer adds for addressing and fetching data, floating point compare, or min/max for processing results, etc. Performance gains will vary at the shader and application level depending on the mix of instructions. Ray tracing denoising shaders are good examples that might benefit greatly from doubling FP32 throughput.

Doubling math throughput required doubling the data paths supporting it, which is why the Ampere SM also doubled the shared memory and L1 cache performance for the SM. (128 bytes/clock per Ampere SM versus 64 bytes/clock in Turing). Total L1 bandwidth for GeForce RTX 3080 is 219 GB/sec versus 116 GB/sec for GeForce RTX 2080 Super.

The GPC is the dominant high-level hardware block with all of the key graphics processing units residing inside the GPC. Each GPC includes a dedicated Raster Engine, and now also includes two ROP partitions (each partition containing eight ROP units), which is a new feature for NVIDIA Ampere Architecture GA10x GPUs. More details on the NVIDIA Ampere architecture can be found in NVIDIA’s Ampere Architecture White Paper, which will be published in the coming days.

Ampere also ties its ROPs to the HPC and houses a total of 16 ROP units per GPC. The full GA102 GPU feature 112 ROPs while the GeForce RTX 3080 comes with a total of 96 ROPs. 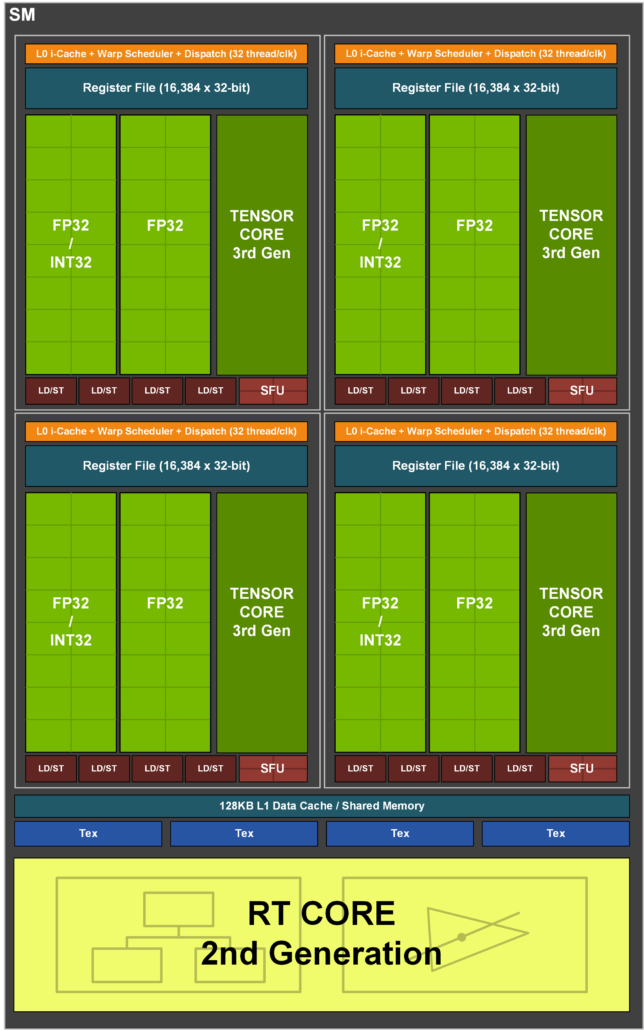 The block diagram of the NVIDIA Ampere SM Gaming GPUs.

The entire SM works in harmony by using different blocks to deliver high performance and better texture caching, enabling for up to twice as better CUDA core performance when compared to the previous generation. 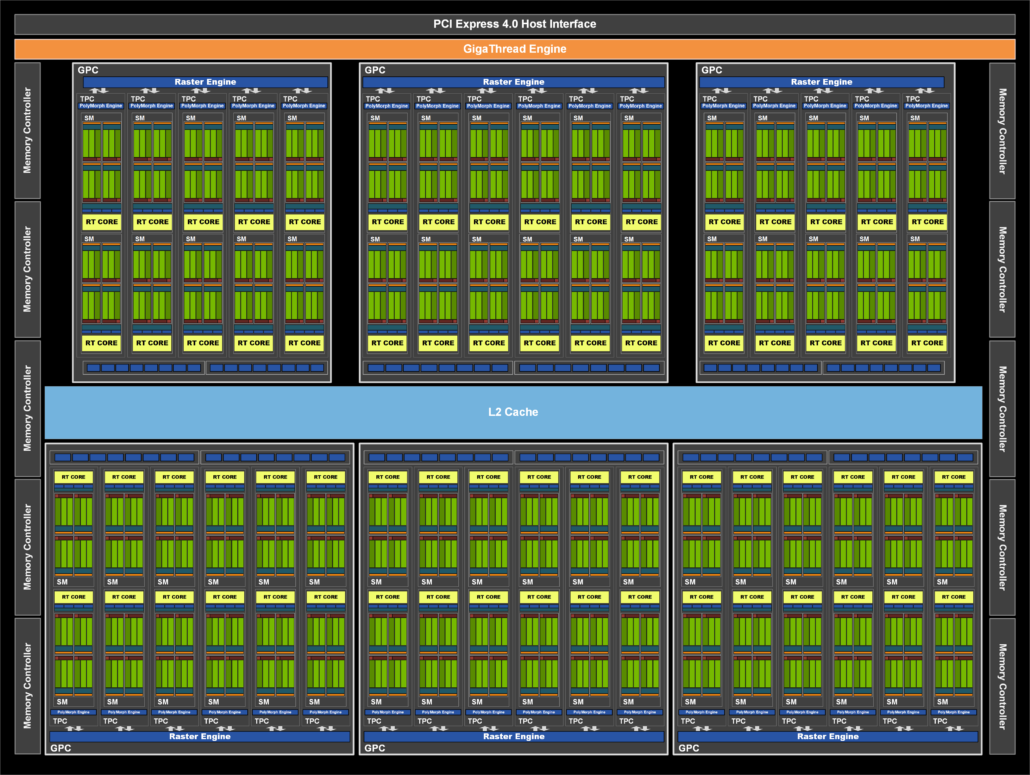 A block diagram of the GA102 GPU featured on the NVIDIA GeForce RTX 3080 graphics card.

Many of these Ampere SMs combine to form the Ampere GPU. Each TPC inside the Ampere GPU houses 2 Turing SMs which are linked to the raster engine. There are a total of 6 TPCs or 12 Ampere SM that are arranged inside the GPC or Graphics Processing Cluster. The top configured GA102 GPU comes with 7 GPCs with a total of 42 TPCs and 84 SMs that are connected to 10 MB of L1 and 6 MB of L2 cache, ROPs, TMUs, memory controllers, and NVLINK HighSpeed I/O hub. All of this combines to form the massive Ampere GA102 GPU. The following are some perf figures for the top Ampere graphics cards.

In terms of shading performance which is the direct result of the enhanced core design and GPU architecture revamp, the Ampere GPU offers an uplift of up to 70% better performance per core compared to Turing GPUs.

It should be pointed out that these are just per core performance gains at the same clock speeds without adding the benefits of other technologies that Ampere comes with. That would further increase the performance in a wide variety of gaming applications.

The full GA104 GPU is made up of 6 graphics processing clusters with 8 SM units on each cluster. That makes up 48 SM units for a total of 6144 cores in a 17.4 billion transistor package measuring 392.5mm2.