The MSI MEG Z590 ACE is themed in black and silver colors with slight gold accents on the labels. This is a top-tier product that retails at over $500 US, making it the second most expensive Z590 motherboard in MSI's lineup. The motherboard comes in the standard ATX form factor and is jam-packed with features.

The board uses the LGA 1200 socket to support Intel Core processors. The socket is compatible only with Intel's 10th & 11th Generation core family. The socket has a protective cover on top of it that points out the exclusivity with Comet Lake 10th Gen & Rocket Lake 11th Gen CPUs & refrains users from running an older 8th or 9th generation CPUs as they won't fit in the socket at all and forcing them in the socket is only going to cause permanent damage to your motherboard. 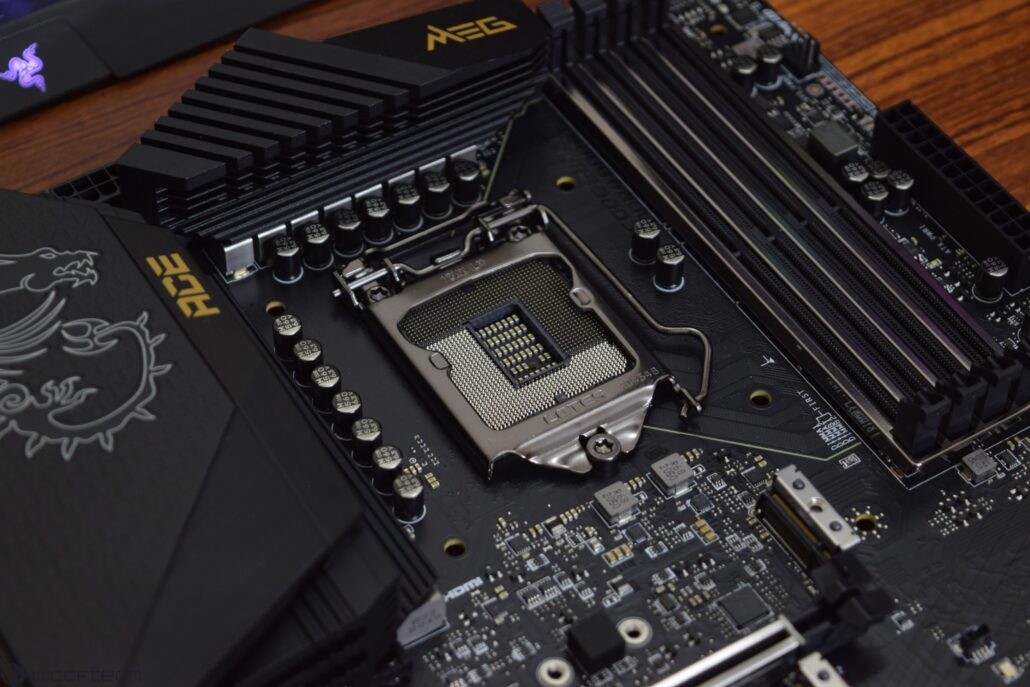 Next to the socket are four DDR4 DIMM slots that can support up to 128 GB dual-channel memory. These slots are rated to support XMP profiles up to 5600 MHz (OC Plus). The DIMM slots feature metallic shielding around them for extra durability. Each slot is labeled, making it easier to install DIMMs in the proper orientation. 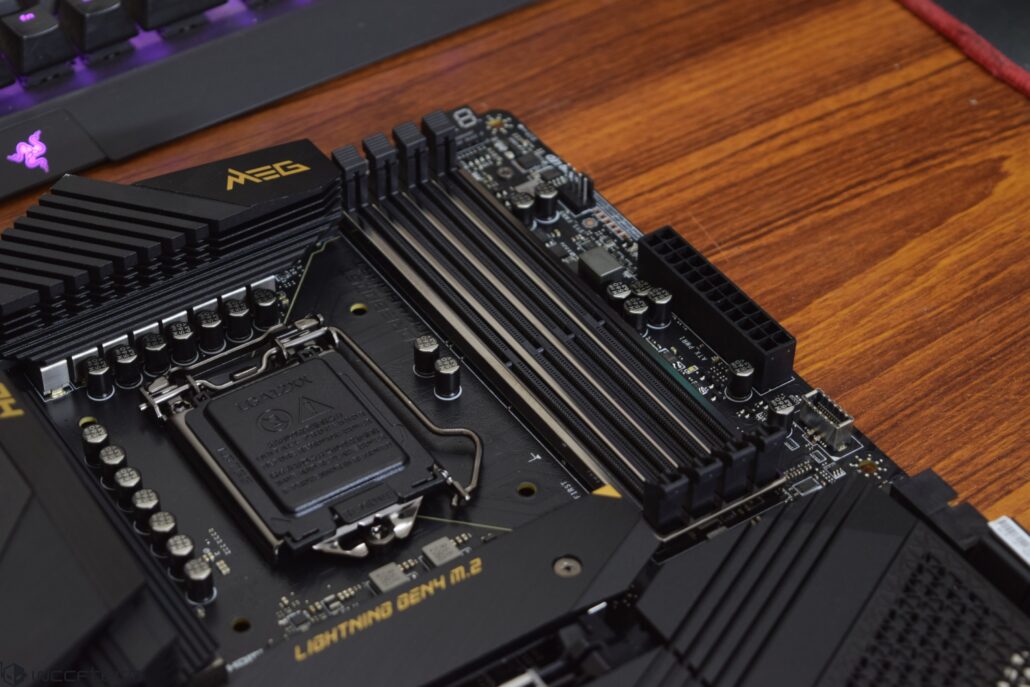 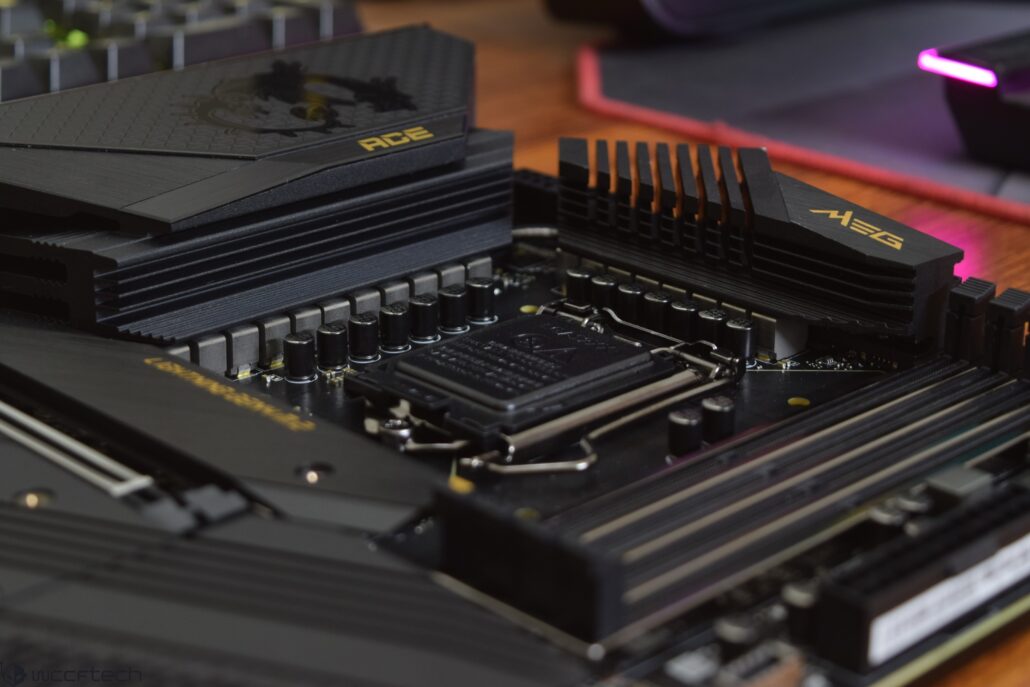 As you can see, the VRMs are getting ample cooling from two massive aluminum-based heatsinks that are interconnected via a heat pipe. This motherboard is designed for overclocking so expect a smooth & stable operation of the electrical circuitry when this board is running. 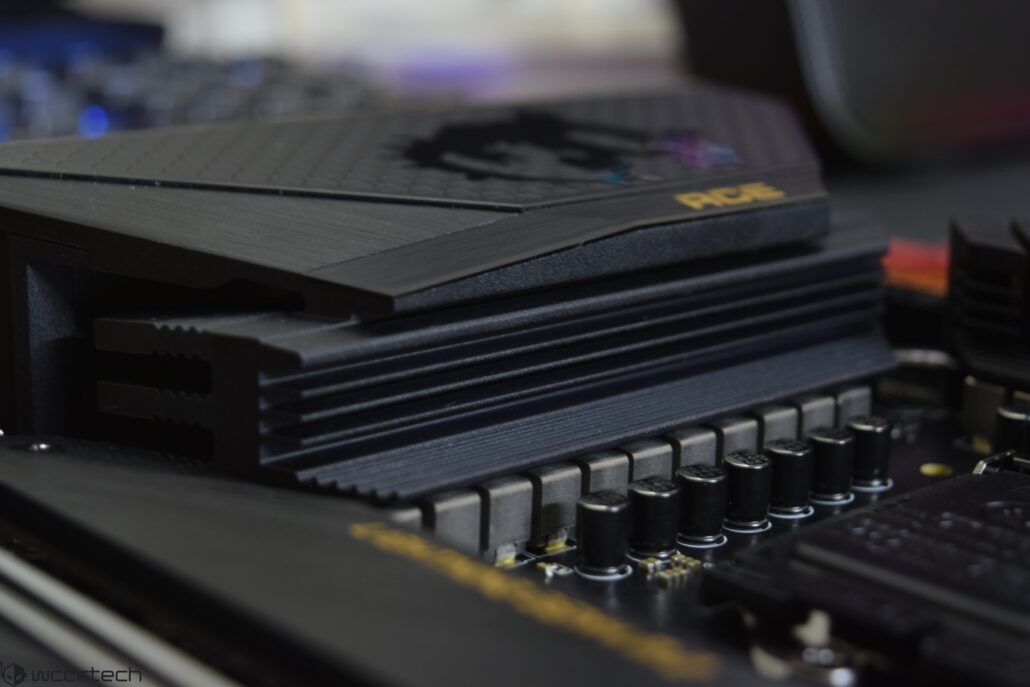 The CPU is supplied power through dual 8 pin power connectors. This will feed the CPU with up to 300 Watts of power. The Intel 11th Gen Unlocked CPUs are very power-hungry, consuming 125W at the base and up to 250W at boost frequencies while overclocking them would require even more power so the extra power input is a necessity rather than a feature on the high-end Z590 boards. 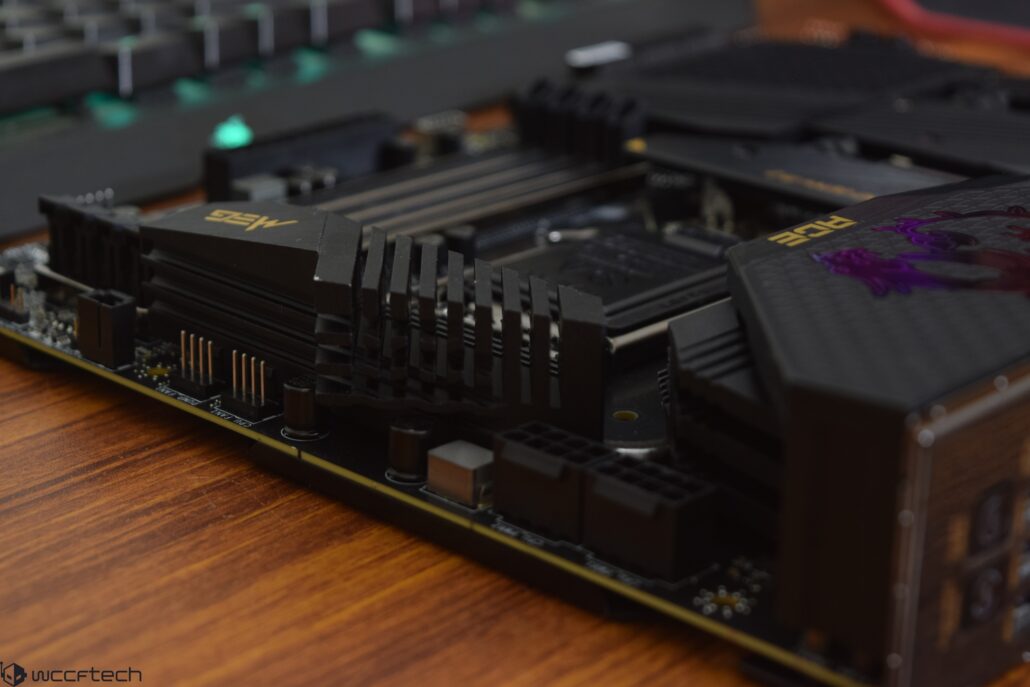 Getting a closer look at the VRM heatsinks reveals an aluminum fin design underneath the baseplate for the topmost heatsink. Each heatsink has 7w/Mk thermal pads located underneath for efficient transfer of heat. The motherboard also comes with a backplate that features thermal pads for extra cooling performance. 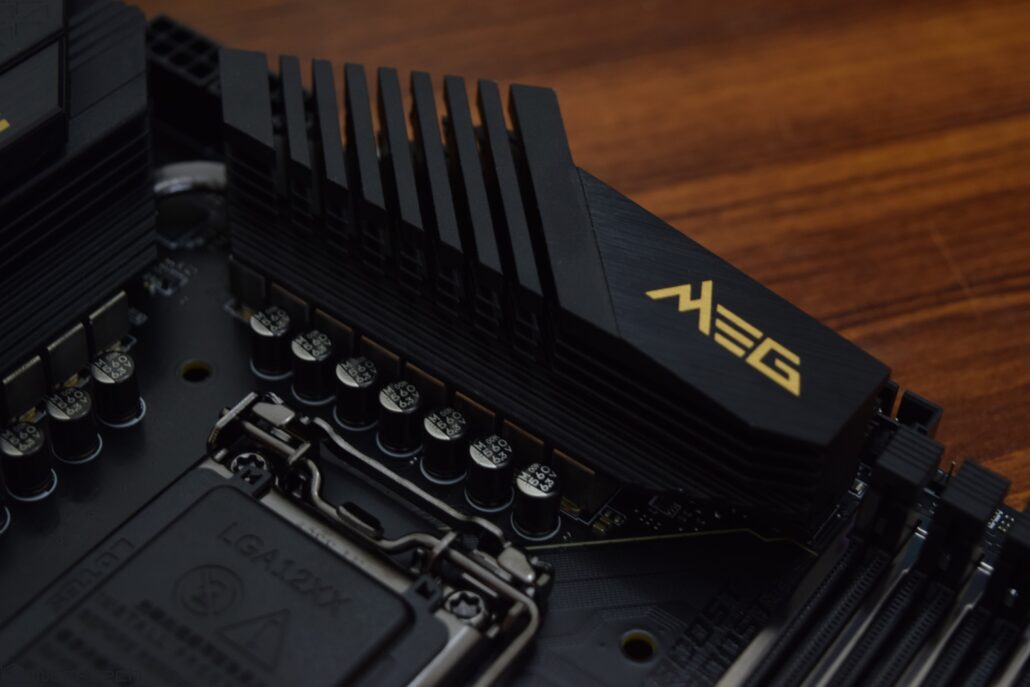 The MEG and ACE labels are laser-etched on both heatsinks and provide a nice aesthetic for the motherboard. 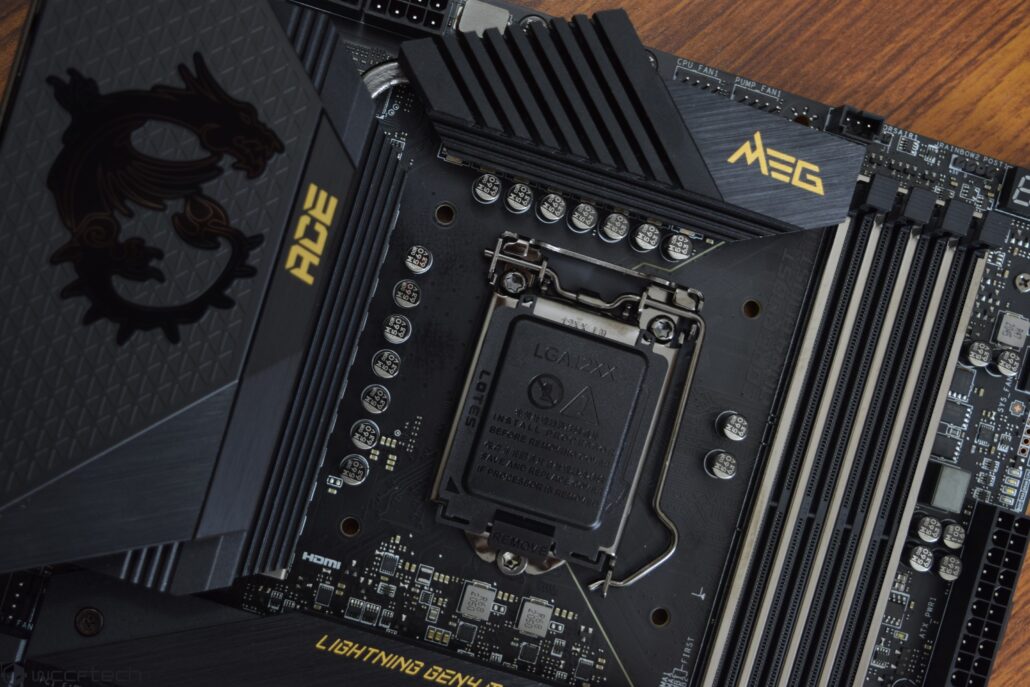 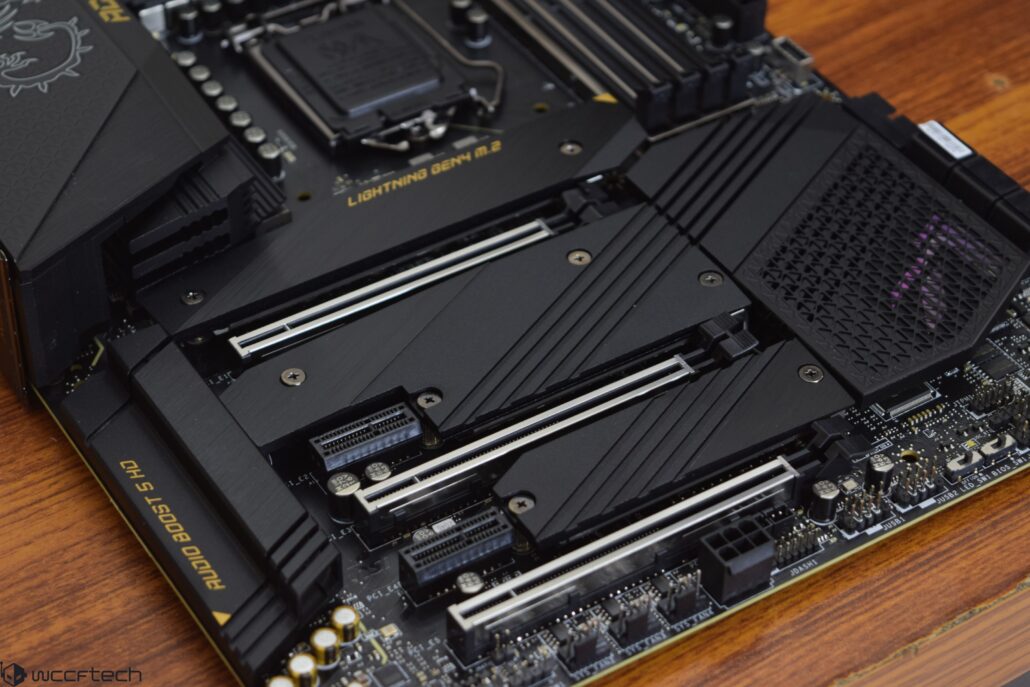 MSI is using a metallic cover on the sides of the expansion slots which provides protection to some extent. It adds more retention and shearing resistance by reinforcing the slots with metal plates. Aside from adding more protection, they do look really sweet. 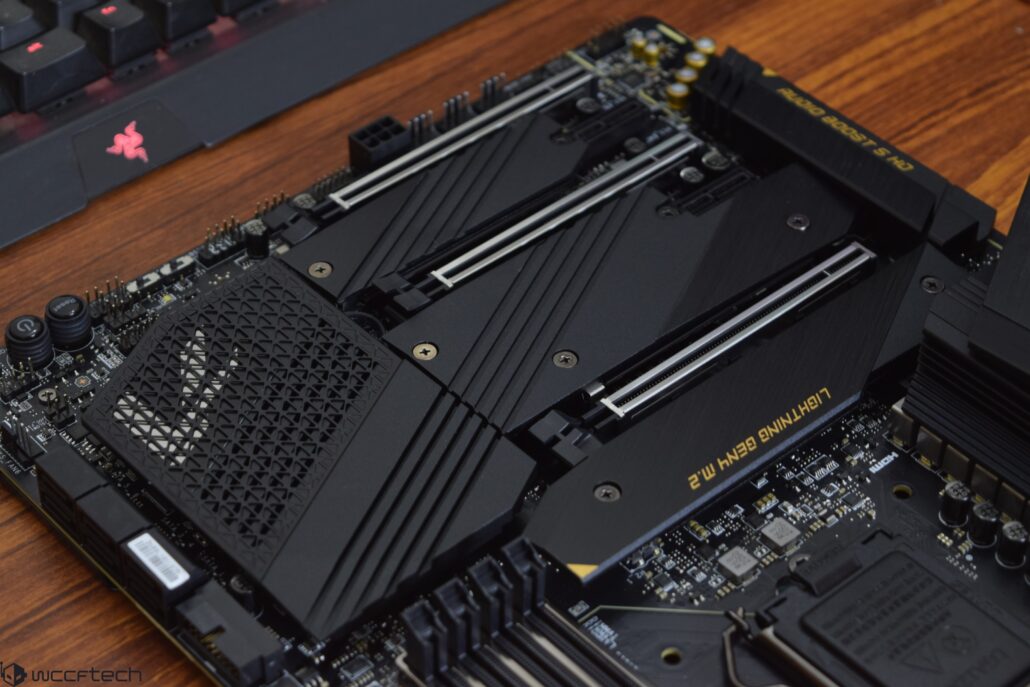 The quadruple M.2 slots are cooled off by the thermal pad and aluminum baseplate cooling. This is part of MSI's M.2 Shield Frozr cooling technology and ensures stable operation for M.2 storage devices. The thermal adhesive has a plastic cover over them which needs to be removed before using them with the storage devices. 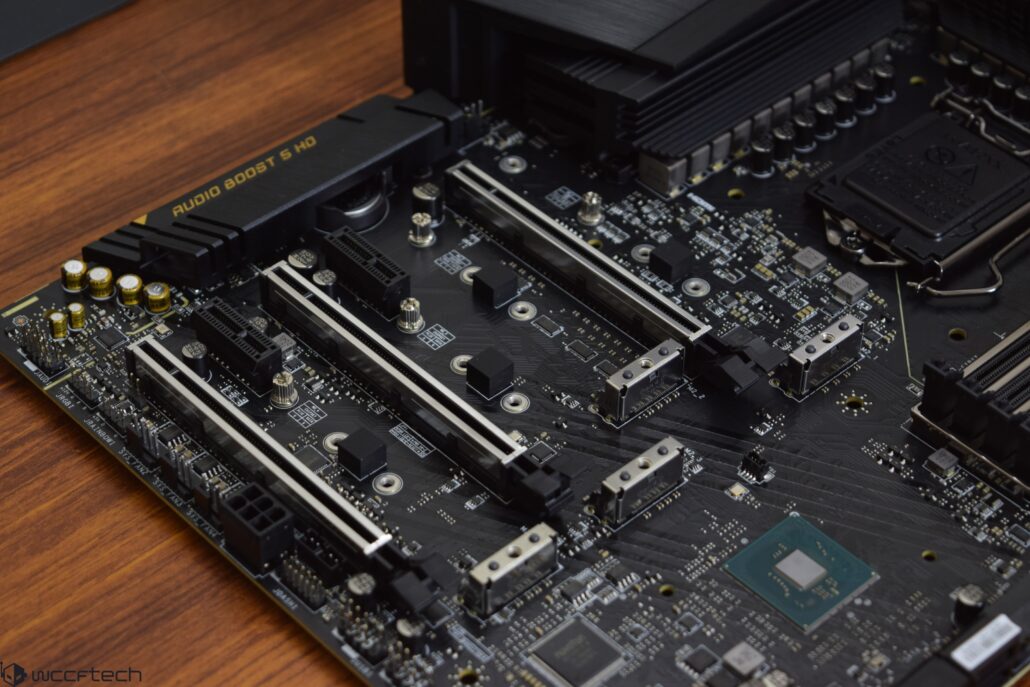 The Z590 PCH is housed beneath a large heatsink that has exhaust vents over it but don't worry as it doesn't feature a hidden fan beneath it. The perforated design on the heatsink cover is just for aesthetic since it has several RGB LEDs running on MSI's Mystic Light technology underneath it. 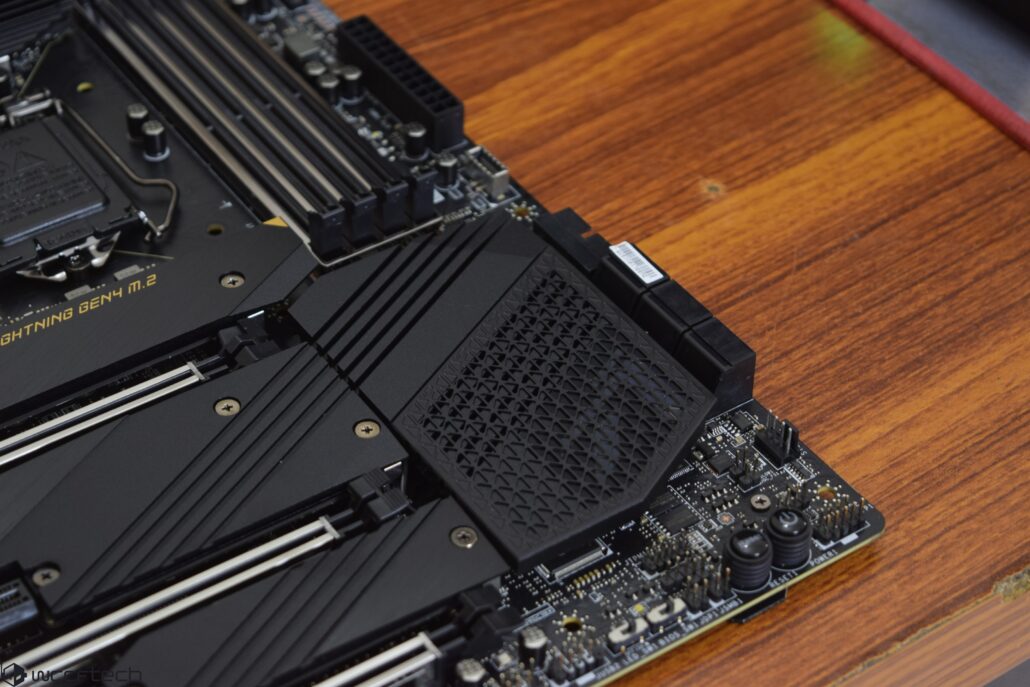 The PCH heat sink has RGB LEDs and provides a good light show for those that are interested in RGBs trend. You can also turn off the LEDs entirely through MSI's bundled software if you are not a fan of such LEDs. 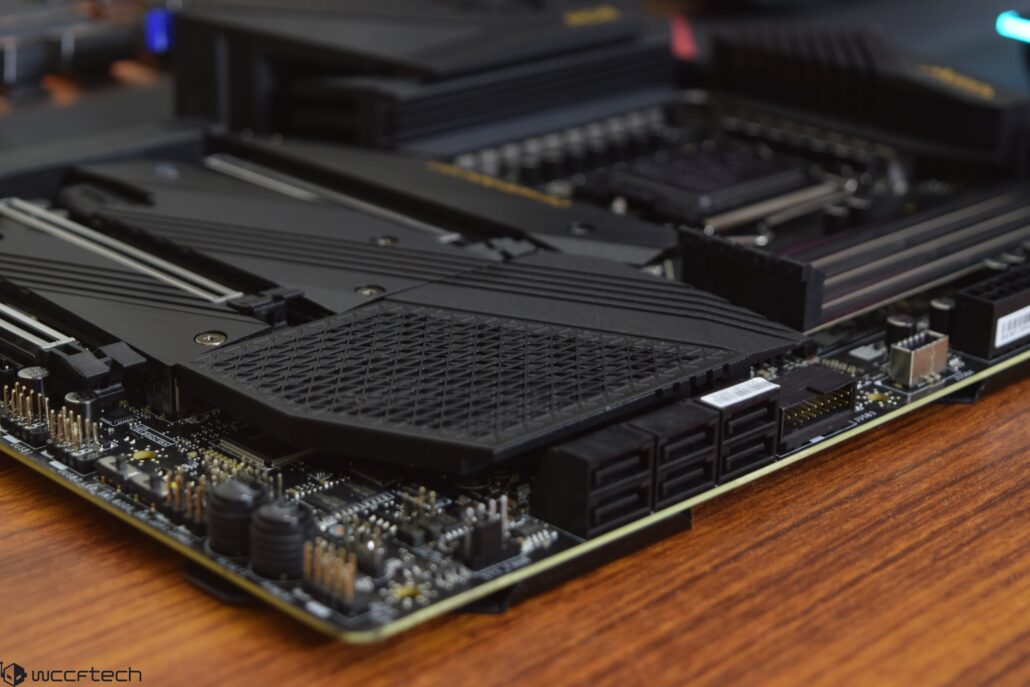 Storage options include six SATA III ports rated to operate at 6 GB/s. These can support six different storage devices at once. There are also dual USB 3.2 front panel connectors of which one is right-angled. Many fan headers and jumpers can be found beneath the storage ports. 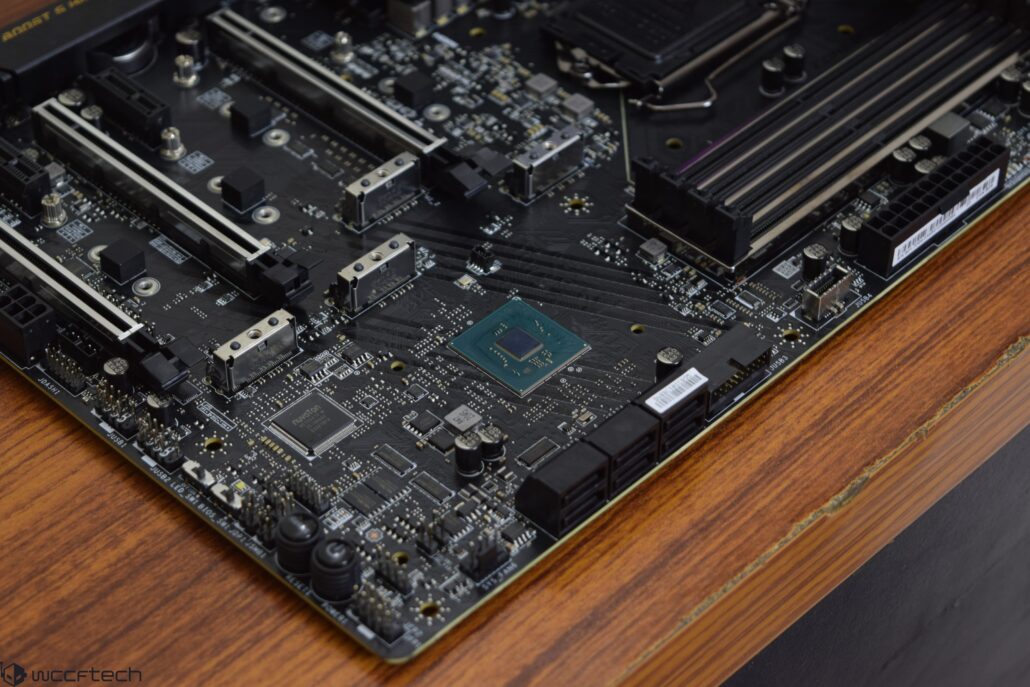 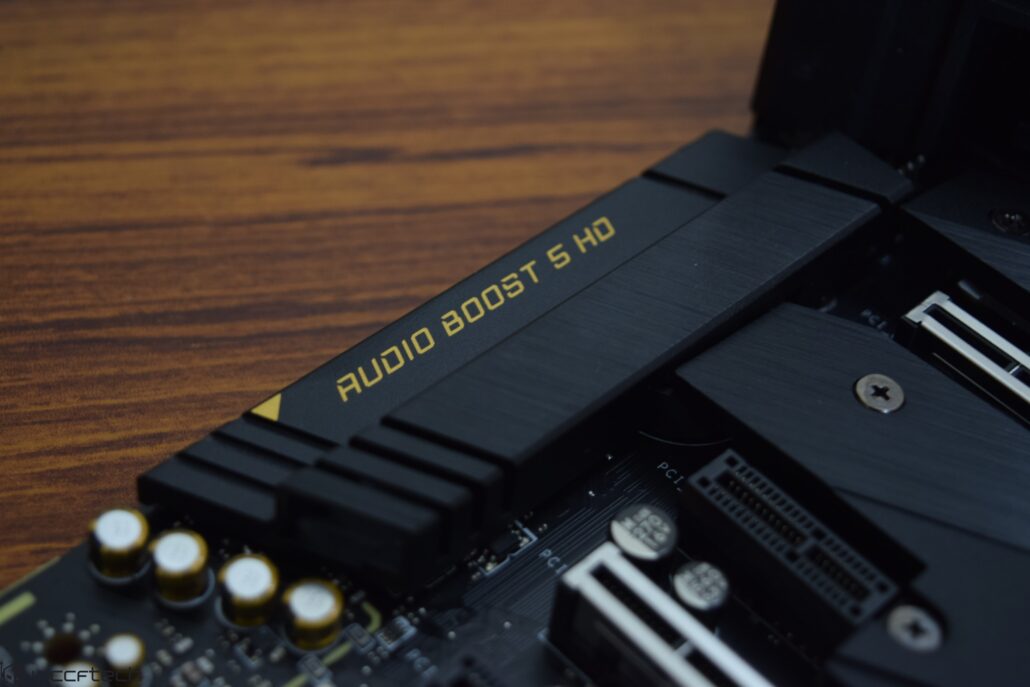 MSI has placed two buttons at the bottom right-hand corner of the board. The purpose of these switches is to allow users to easily Power or Reset the board in overclocking and system tuning cases. A bunch of other connectors for chassis power, RGB, and fan headers can be spotted next to them while the DEBUG LED and voltage measuring points are located at the top right corner of the board. 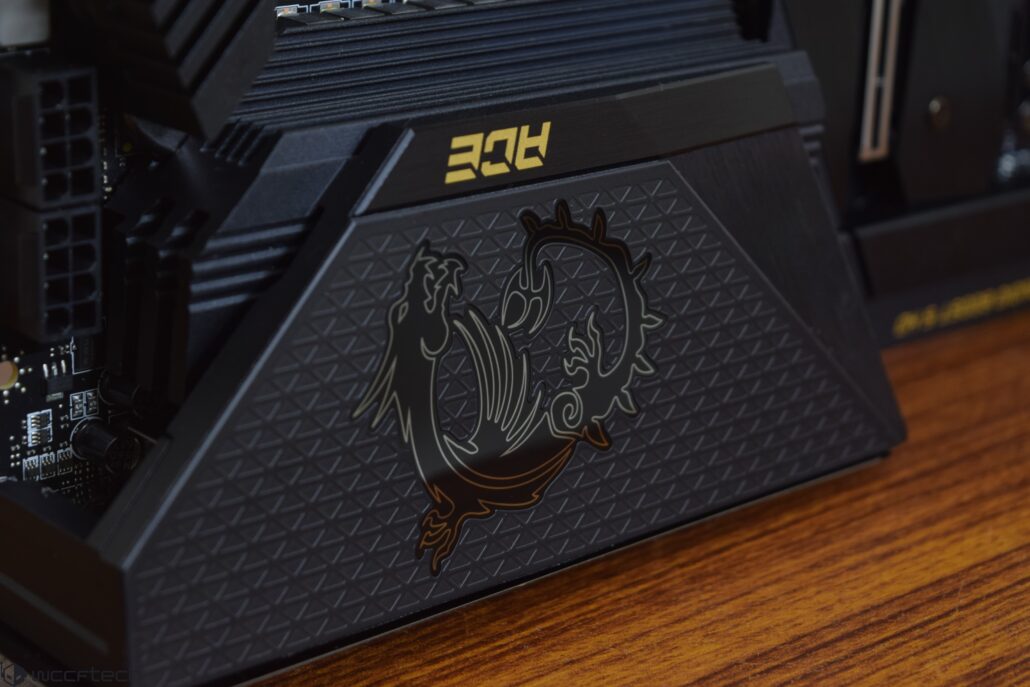 MSI is using Intel's Wi-Fi 6E AX210 to power wireless connectivity such as 802.11ax WiFi (2.4G WiFi) and Bluetooth 5.2. In terms of Ethernet, there is single Gigabit Ethernet LAN ports which include an I225V 2.5G Networking chip. 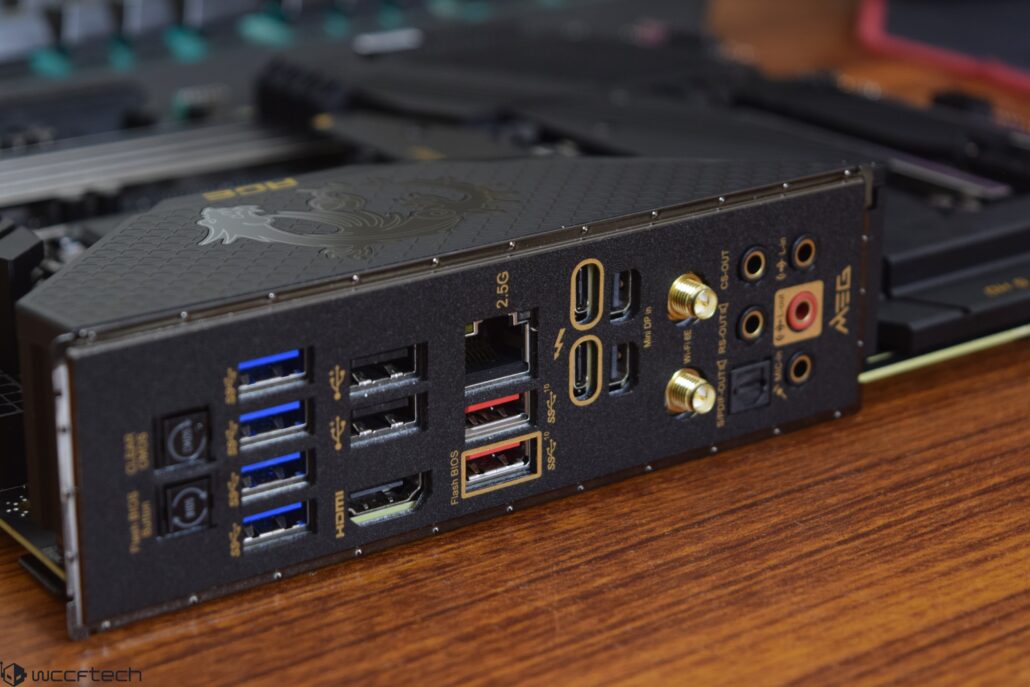 The I/O plate comes with an I/O cover with MSI's iconic dragon logo imprinted over it. Following is the full list of I/O ports on the MSI MEG Z590 ACE motherboard: 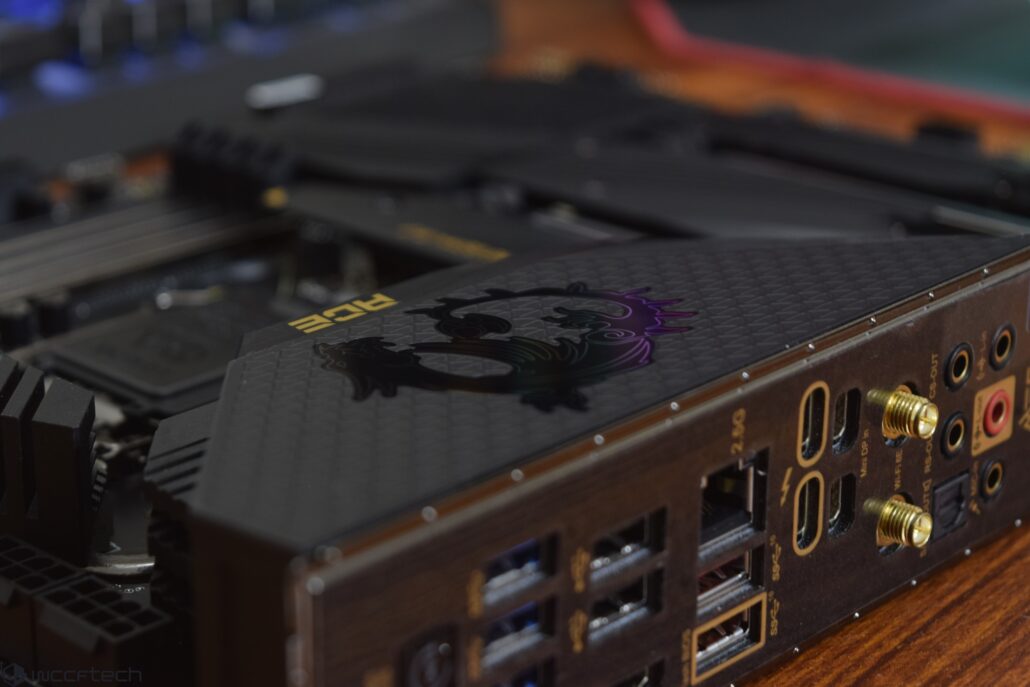