The ASRock Z590 Steel Legend WiFi 6E is styled in white and silvery. It also carries a black and grey colored PCB. The motherboard comes in the standard ATX form factor. The motherboard could be a great option for white PC builds considering it has white-colored heatsinks.

The board uses the LGA 1200 socket to support Intel Core processors. The socket is compatible only with Intel's 10th & 11th Generation core family. The socket has a protective cover on top of it that points out the exclusivity with Comet Lake 10th Gen & Rocket Lake 11th Gen CPUs & refrains users from running an older 8th or 9th generation CPUs as they won't fit in the socket at all and forcing them in the socket is only going to cause permanent damage to your motherboard. 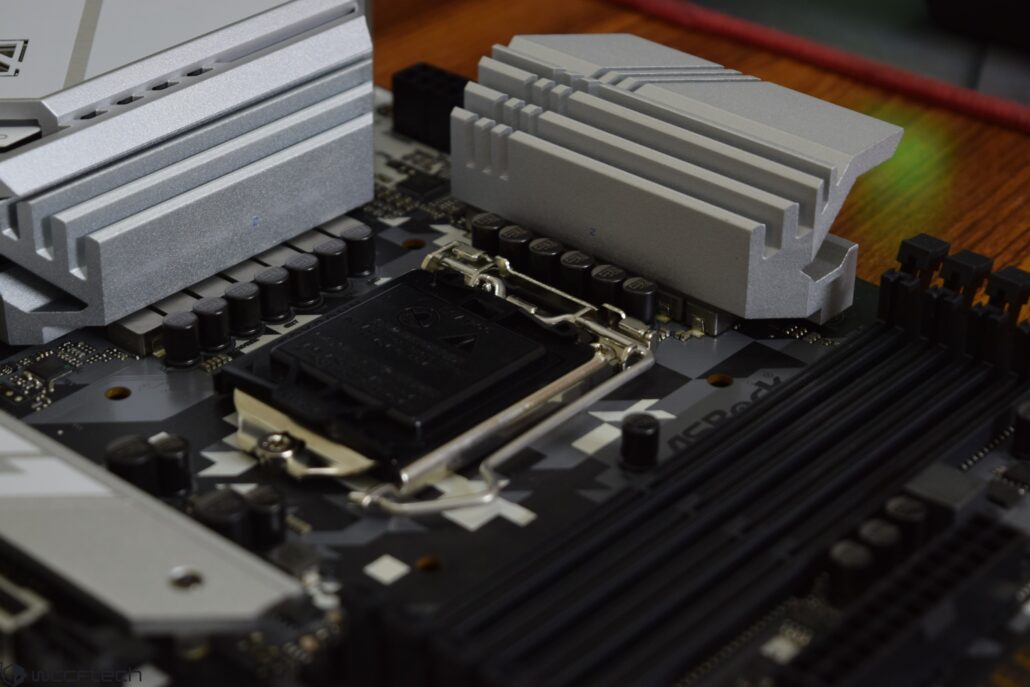 Next to the socket are four DDR4 DIMM slots that can support up to 128 GB dual-channel memory. These slots are rated to support XMP profiles up to 4800 MHz (OC Plus).  Each slot is also labeled, making it easier to install DIMMs in the proper orientation. 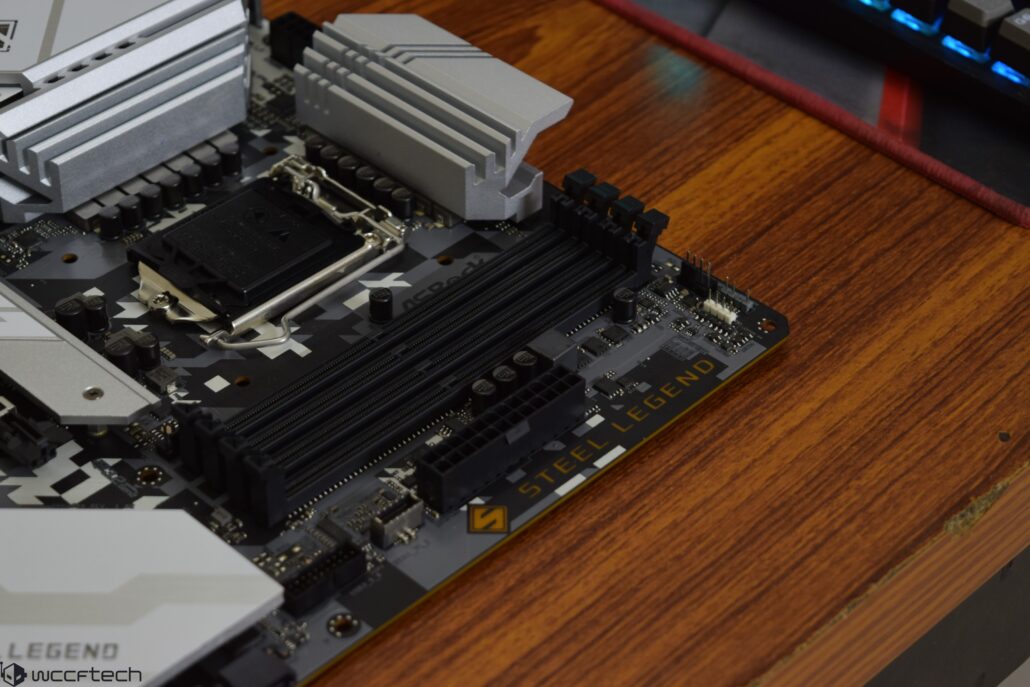 The motherboard packs a 12+2+3 (50A) Dr.MOS VRM delivery. The power delivery is composed of Vishay SiC654 50A MOSFETs while the Richtek RT3609BE (6+1) serves as the primary controller for the PWM, offering a dual output. The board also makes use of premium Nichicon 12K black caps & a high-density glass fabric PCB with a 2oz copper design. 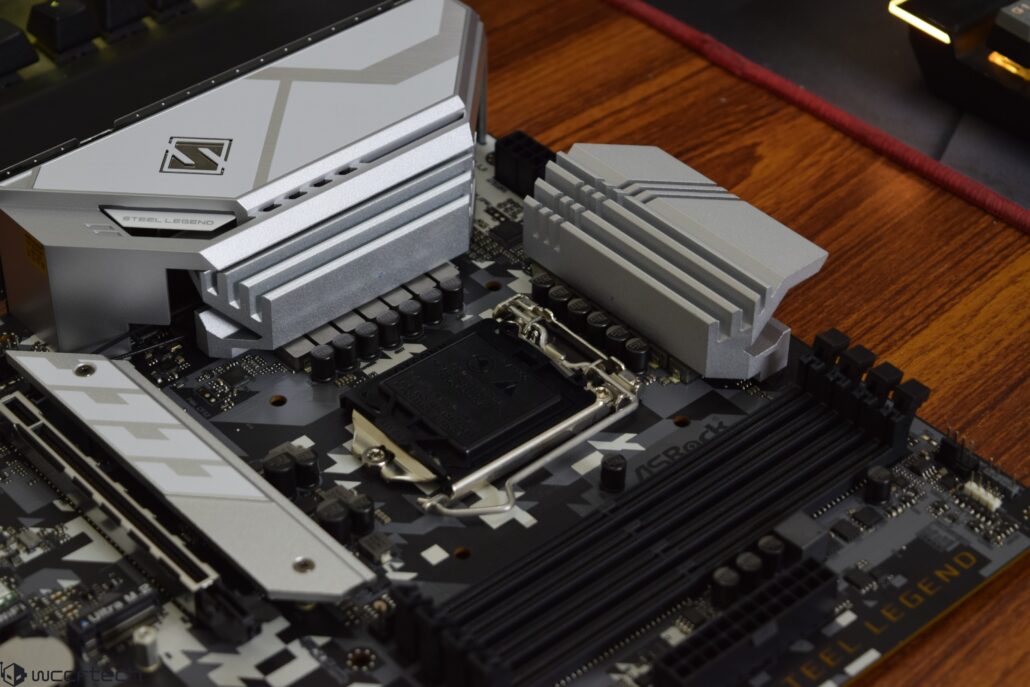 As you can see, the VRMs are getting ample cooling from the XXL Aluminum alloy heatsinks that are going to serve their job well. You can expect some decent overclocking capabilities out of this Z590 motherboard. 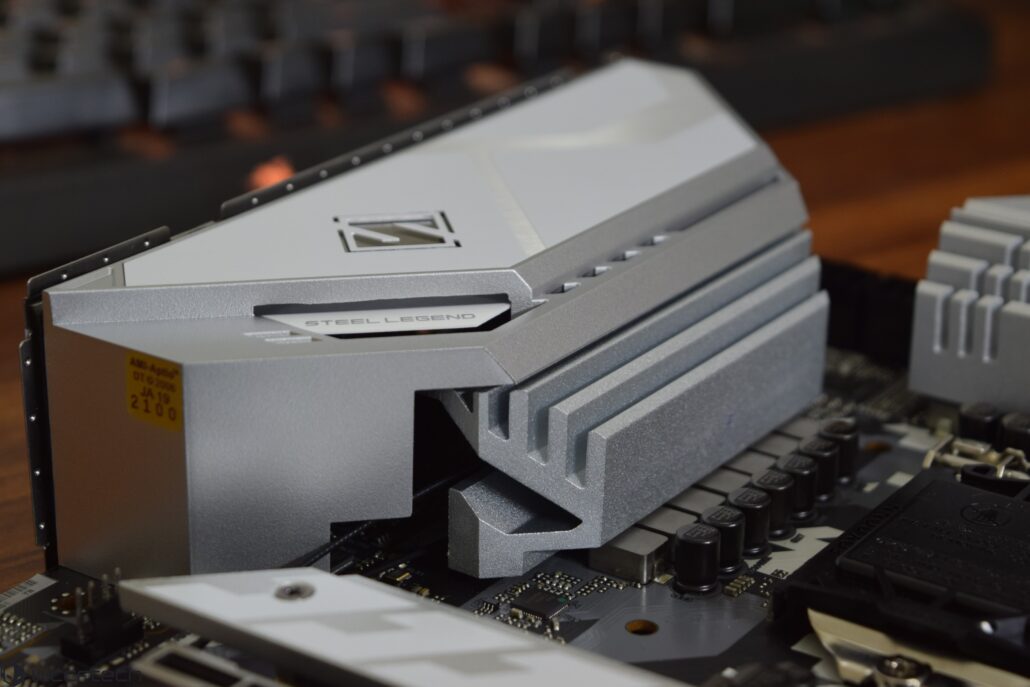 There are two sets of aluminum heatsinks covering the VRMs which are colored in silver. There is no heat pipe connection between them. 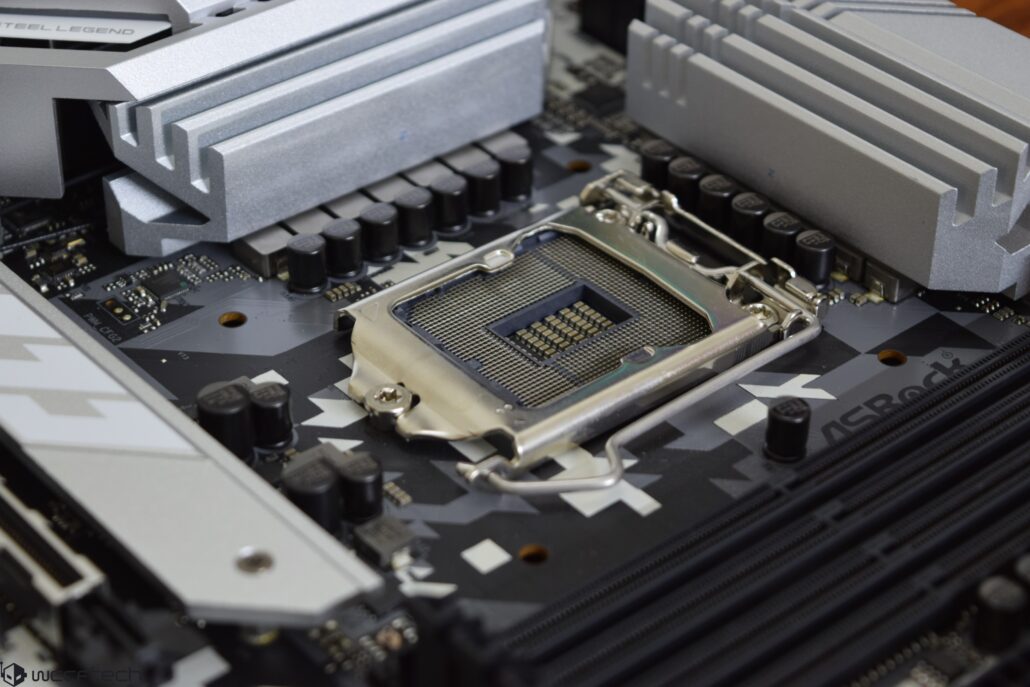 The CPU is supplied power through an 8+8 pin power connector configuration. This will feed the CPU with over 300Wof power. The Intel 11th Gen Unlocked CPUs are very power-hungry, consuming 125W at the base and up to 250W at boost frequencies while overclocking them would require even more power so the extra power input is a necessity rather than a feature on the high-end Z490 boards. 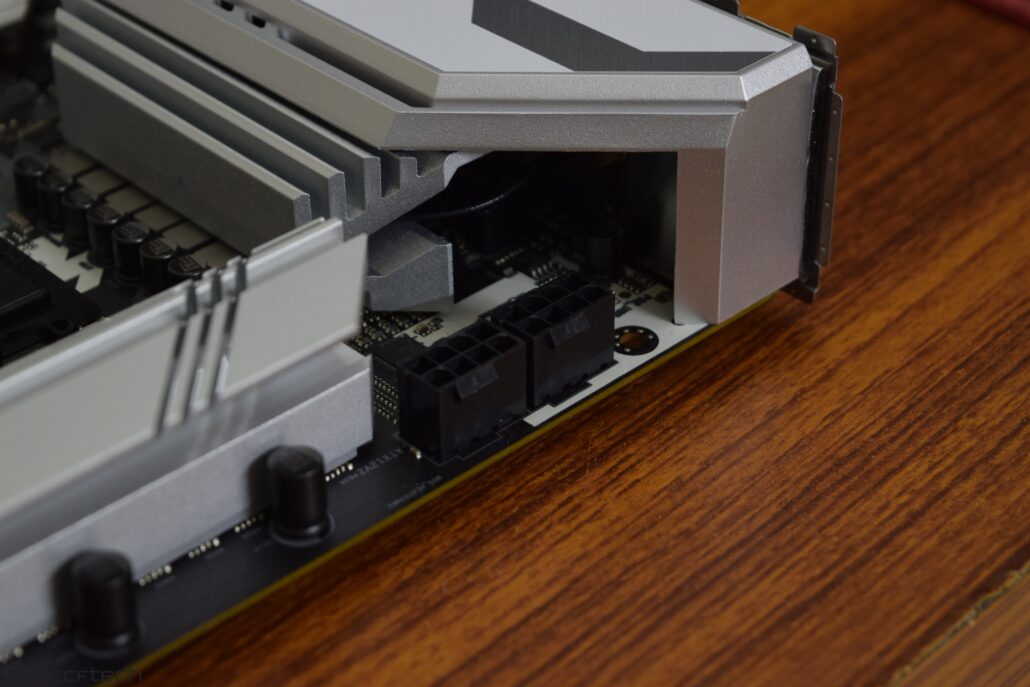 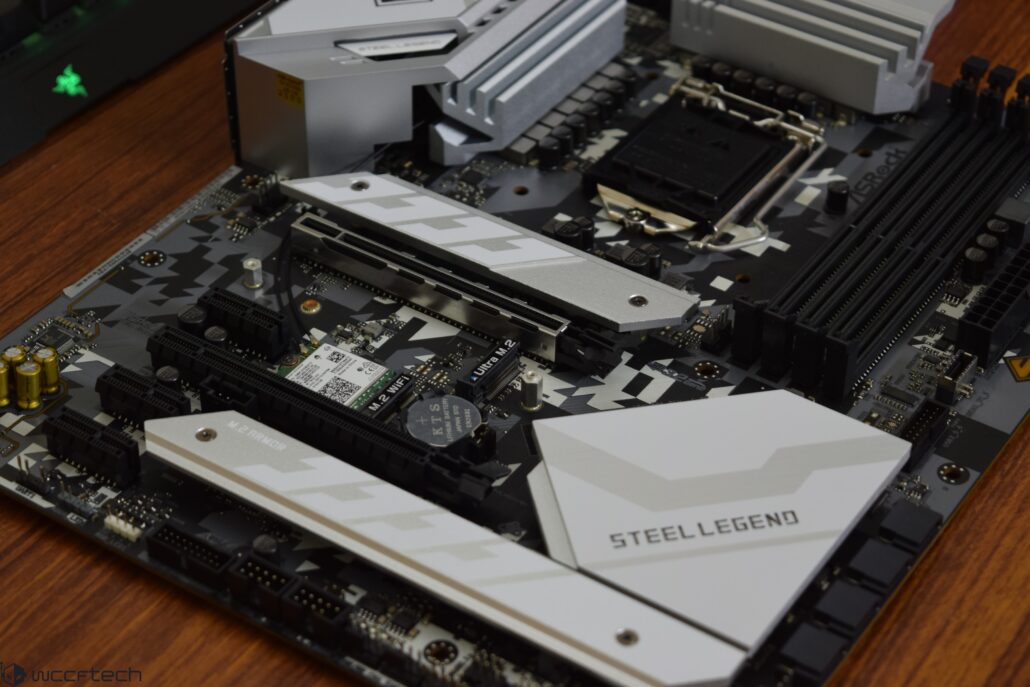 ASRock is using their Steel Slot technology on the sides of the expansion slots which provides protection to some extent. It adds more retention and shearing resistance by reinforcing the slots with metal plates. Aside from adding more protection, they do look really sweet. You can also note that the top two PCIe slots have CPU labels underneath them which shows that they are directly accessing PCIe lanes through the CPU rather than the PCH, making them the most ideal choice for your new GPU. 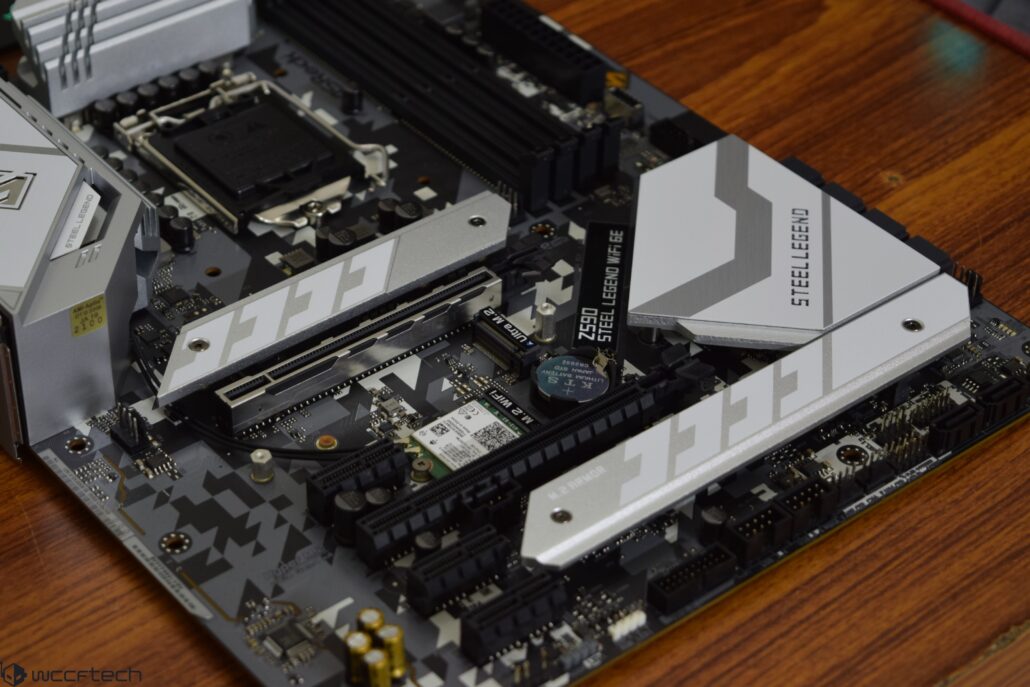 Two of the three M.2 slots feature the Hyper M.2 heatsink that comes with a large metallic plate, acting as a heatsink, and further includes a thermal pad that can sustain higher temperatures when storage devices (M.2 SSDs) are stressed for long durations. Once again, one of the M.2 slots is full-length while the other two are half-length slots. 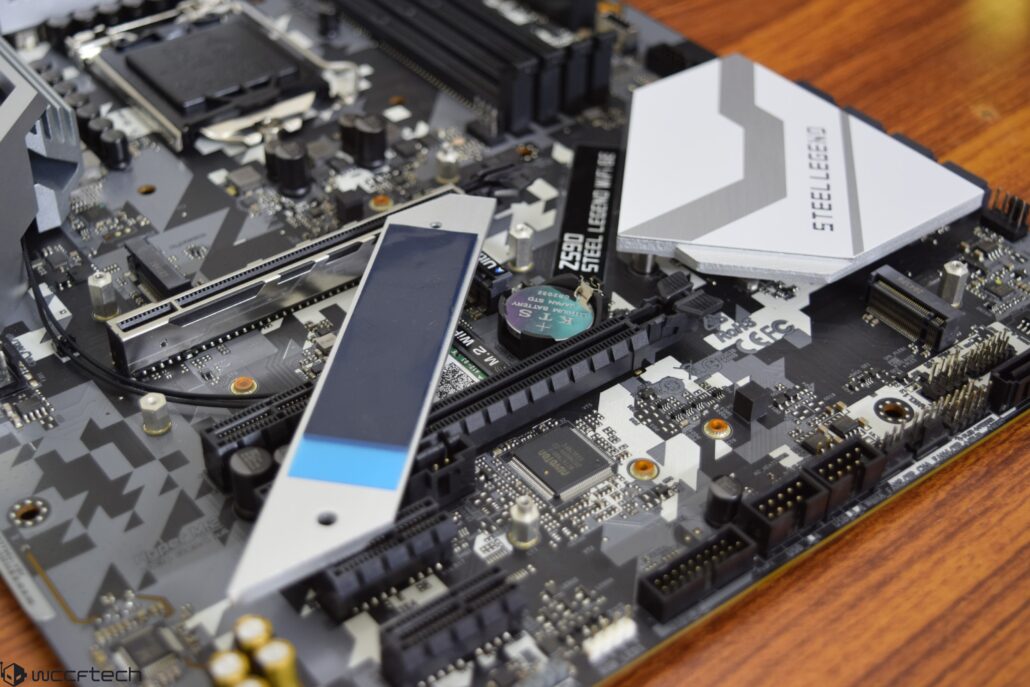 The PCH is cooled off by a metallic heatsink that runs next to the SATA ports. The PCH heatsink has embedded Digital LEDs and provides a good light show for those that are interested in RGBs trend. You can also turn off the LEDs entirely through ASRock's Polychrome software if you are not a fan of such LEDs. 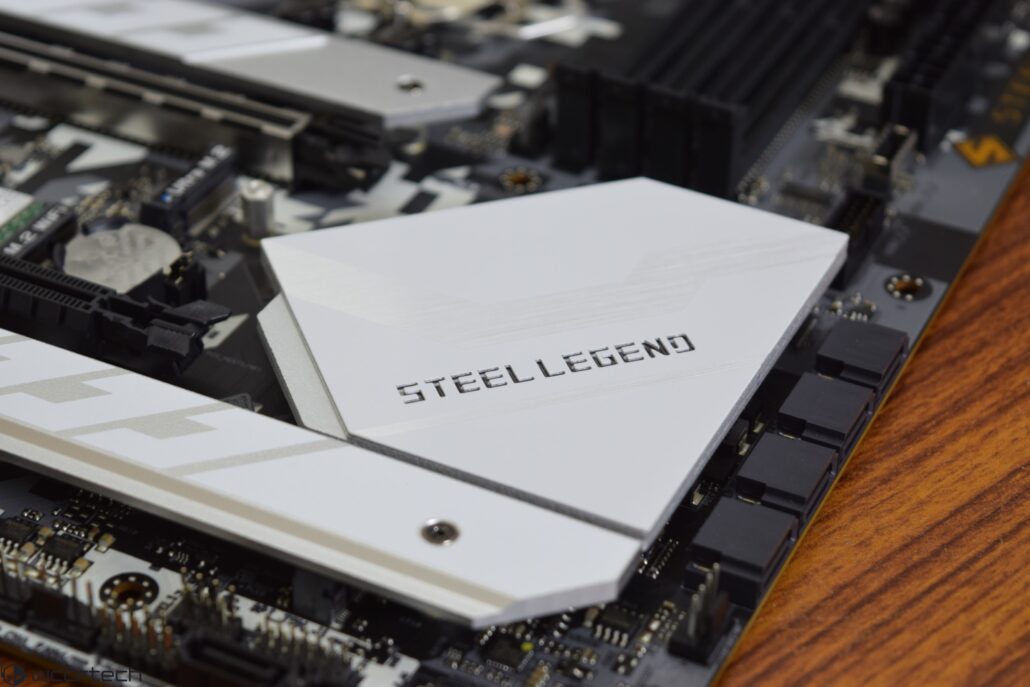 The PCH heatsink features the Steel Legend logo which offers a nice touch on the motherboard. It is also the part of the PCB which lights up with the RGB LEDs. 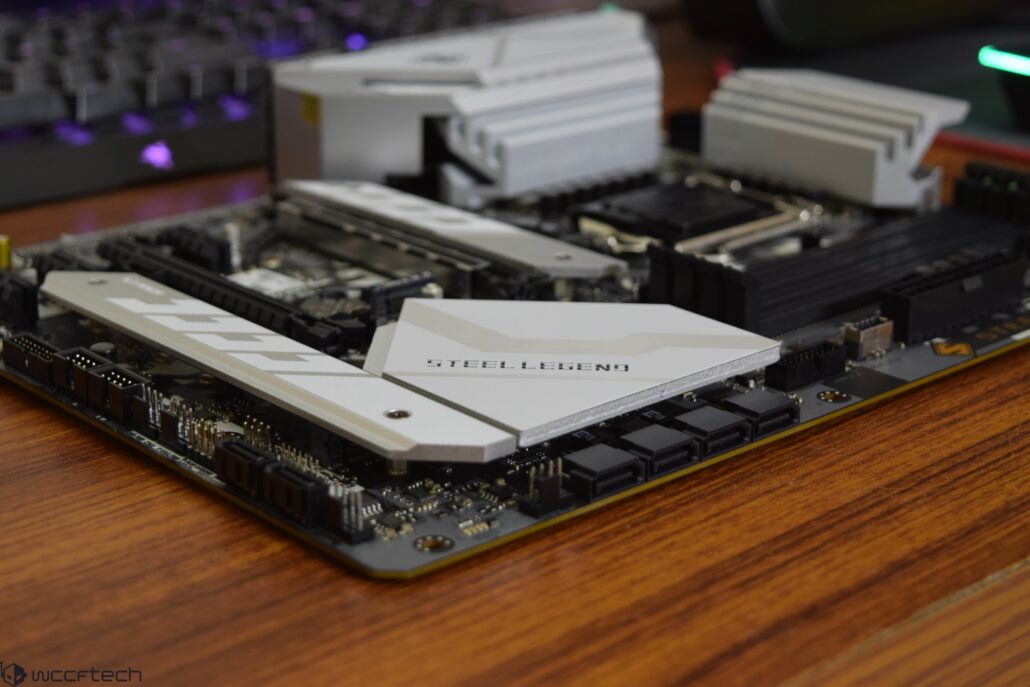 Storage options include six SATA III ports rated to operate at 6 GB/s. These can support a total of six different storage devices at once. Many fan headers and jumpers can be found beneath the storage ports. 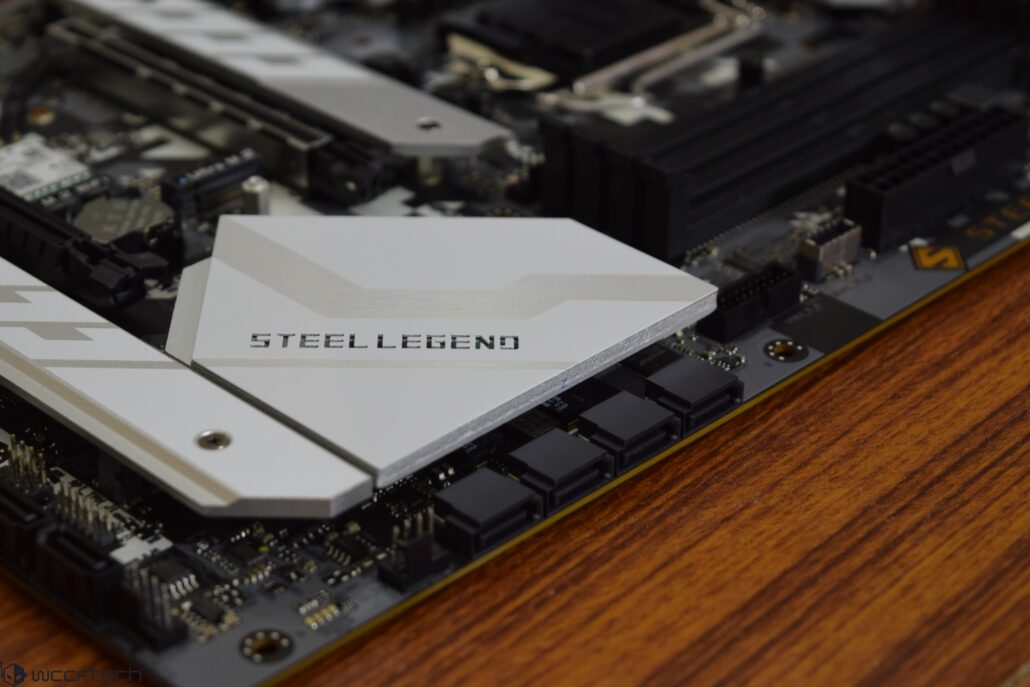 ASRock is still relying on the ALC897 codec which makes use of Nichamic audio, Impedance sense for front and rear channels, 120dB SNR stereo playback output, 113dB SNR recording input and is offered through a 7.1 channel HD audio jack on the back. 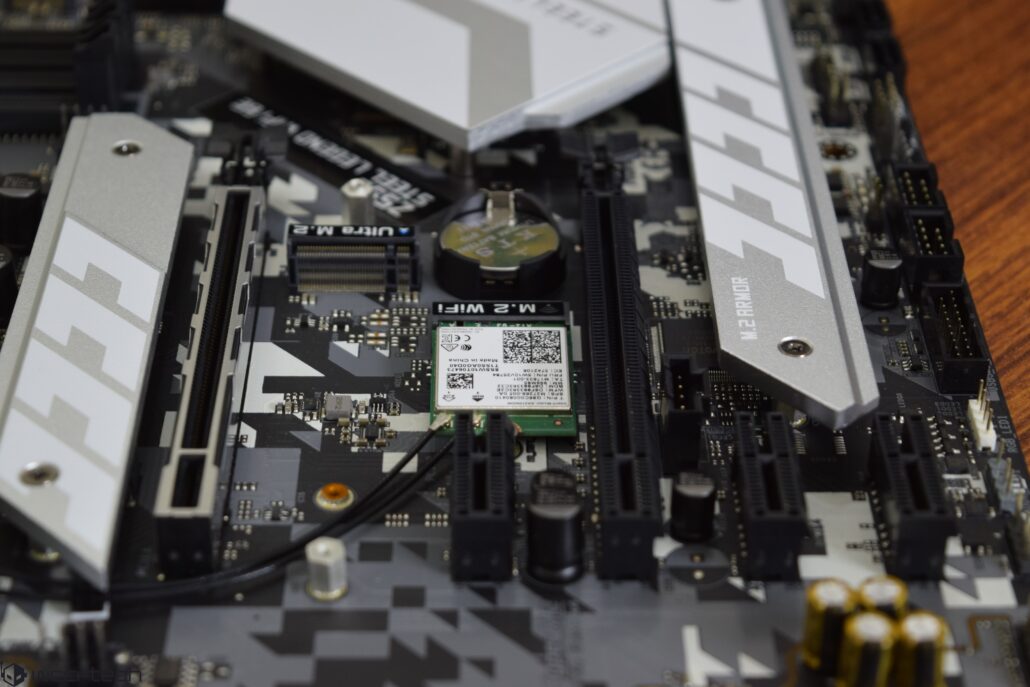 The full list of internal connectors on the motherboard is listed as follows. 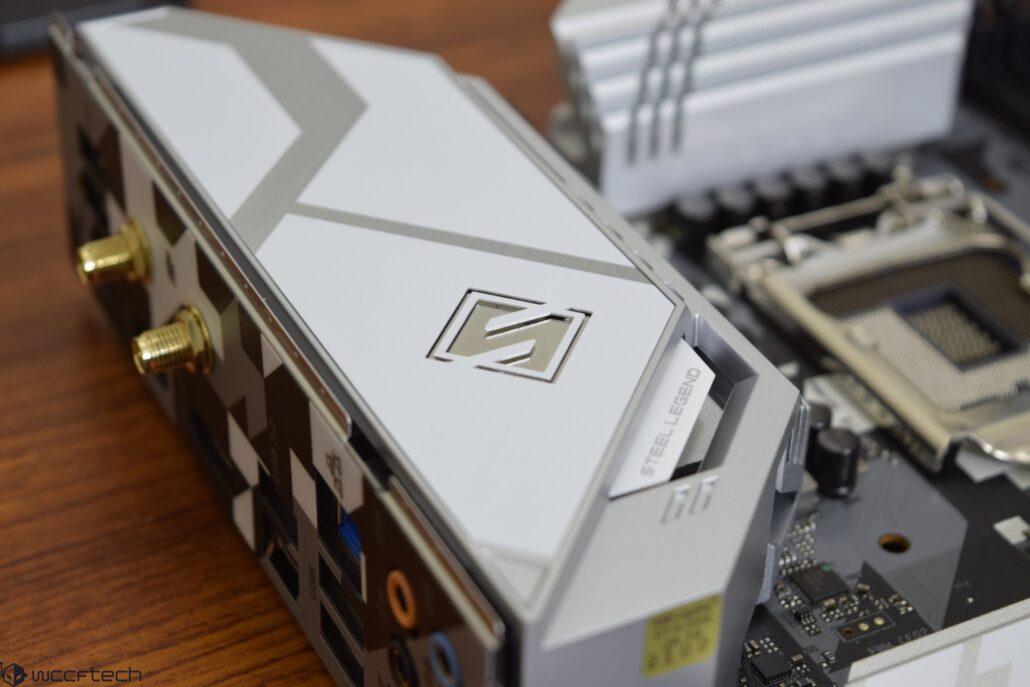 ASRock is using the Intel WiFI 6E AX200 controller that offers wireless capabilities along with Bluetooth 5.2. In terms of I/O, you get a single Dragon RTL8125BG 2.5G Networking LAN port. 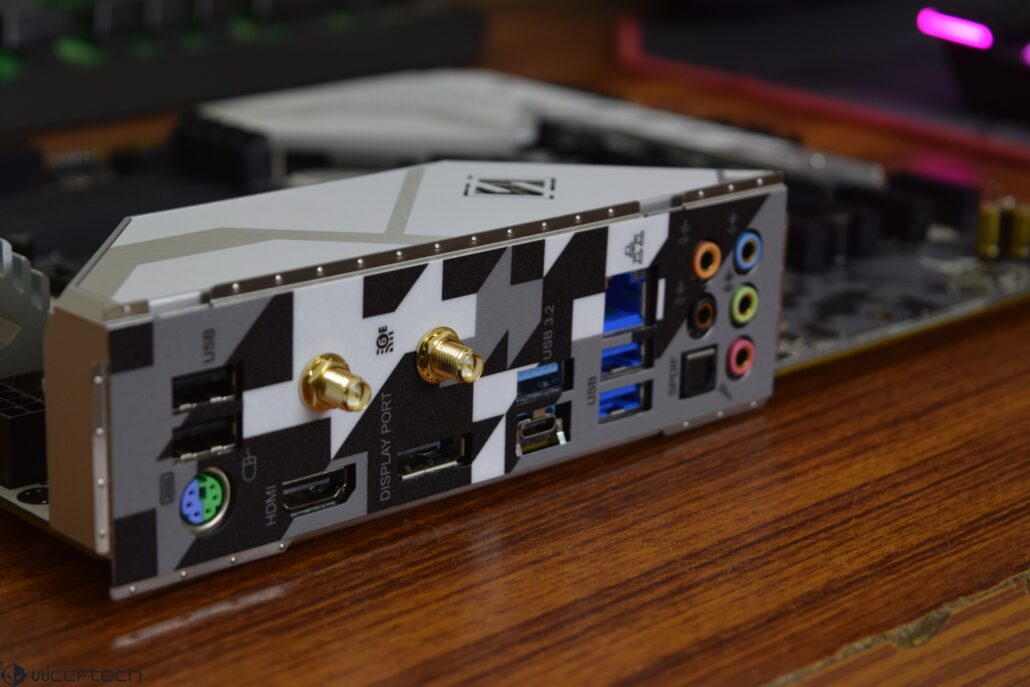 Following is the full list of I/O on the ASRock Z590 Steel Legend WiFi 6E motherboard:

As you can see, the rear panel comes with a pre-mounted I/O shield that additionally uses ASRock's ESD Guard technology for protection against electrostatic charges, minimizing the risk of power fluctuations. 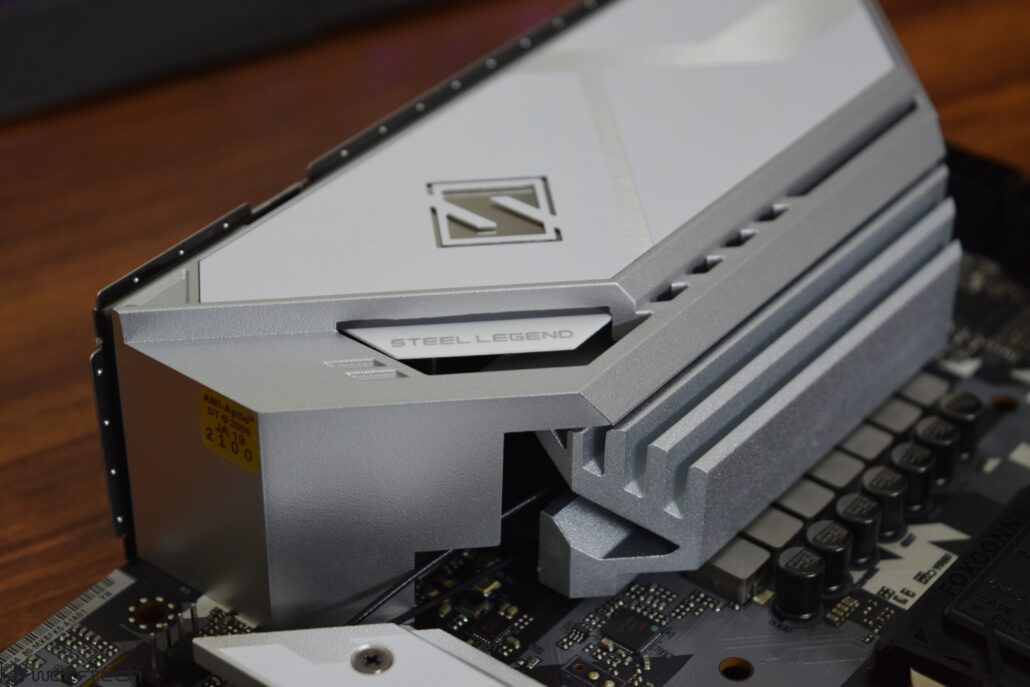