The Intel Rocket Lake-S or the 11th Generation Core Family is going to be the last 14nm, desktop family. The Cypress Cove architecture replaces 2015's Skylake architecture. The architecture has seen several optimizations and key refinements that have led to an increase from 4 cores and 8 threads to 8 cores and 16 threads. The same 14nm process has also been improved to the point that the flagship CPU speeds have seen a massive jump from 4.20 GHz boosts to 5.30 GHz boosts.

There are a couple of topics to talk about but they are all related to Intel's 11th Gen Desktop CPU lineup. Do remember that while Intel brands its Rocket Lake and Tiger Lake CPUs as 11th Gen, they are both based on different architectures, optimizations, and process nodes (14nm vs 10nm SF).

So first up, we have the Adaptive Boost Technology for Intel's 11th Gen Rocket Lake Desktop CPUs. The technology will only be available for Rocket Lake Core i9 'Unlocked' Desktop CPUs. So only two parts will support the technology, namely the Core i9 11900K and the Core i9-11900KF. Adaptive Boost will opportunistically allow higher multi-core clock speeds on the said processor. 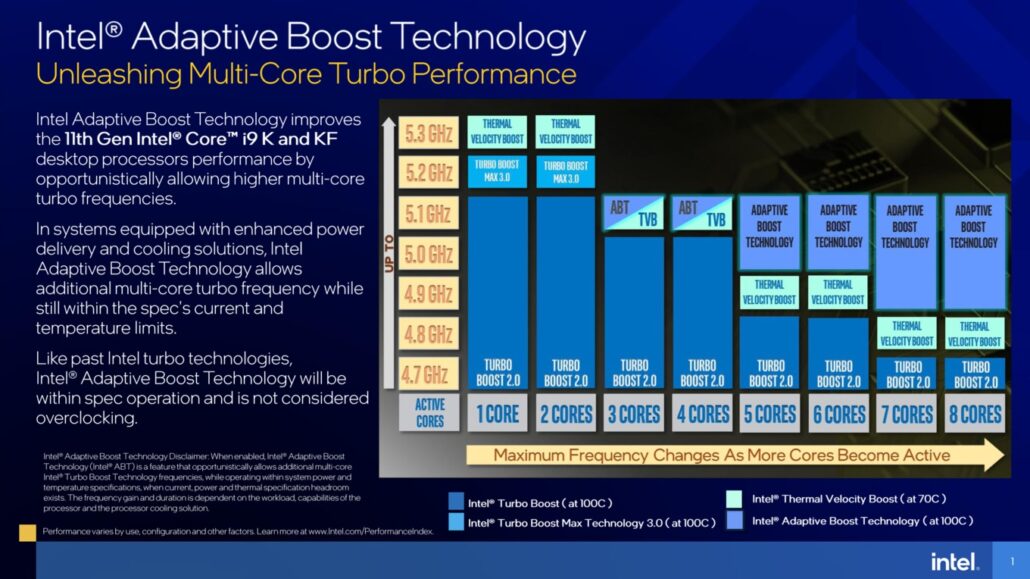 Adaptive boost for Intel Core i9 'K' series processors would deliver higher multi-core clock speeds for systems that have adequate power delivery and cooling configurations while remaining within the spec's current and temperature limit. Adaptive boost, like TVB (Thermal Velocity Boost), will not be considered as overclocking so you won't be losing your warranty while running this feature.

In the chart, it is shown that with Adaptive Boost technology, Intel Rocket Lake Core i9 CPUs can get up to 5.1 GHz across 3 to 8 cores with a temperature limit of 100C. This is a marked boost over the 4.8 GHz all-core boost that Thermal Velocity Boost will have to offer & that's only till a working CPU temperature of 70C.

In addition to that, the Power Limits for Intel's entire Rocket Lake stack of 11th Gen CPUs have been detailed too by Intel. The chart compares the Intel 11th Gen PL (Power Limits) with the 10th Gen Comet Lake family. Starting with the top of the stack, we get to see Intel sticking with the PL1 ratings of 125W but raising the PL2 limit to 203W base (vs 177) & 251W Perf (vs 250) on its flagship part. Do remember that Intel's flagship 11th Gen CPU features eight cores compared to ten cores on the Comet Lake flagship. 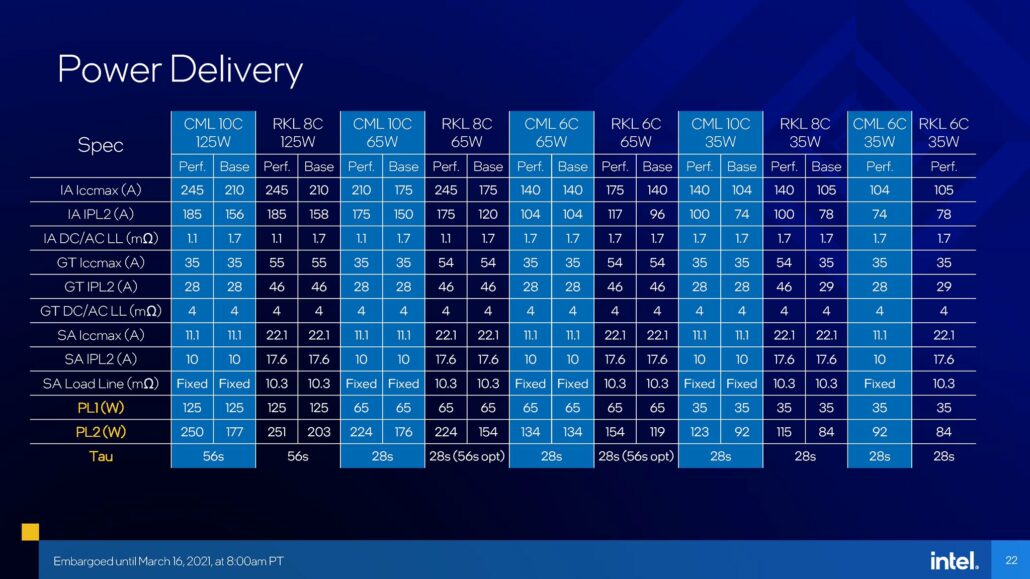 Going down the stack, we have the 35W 'T' series SKUs which are once again featuring lower power limits than the 10th Gen stack. The base PL1 profile sticks at 35W while the base PL2 profile sticks to 84W (vs 92W) while the PL2 performance profile sticks to 115W (vs 123W). Last but not least, we have the 35W six-core SKUs which stick to the base PL1 profile of 35W while featuring a lower PL2 limit of 84W (vs 92W). As of right now, we only know that Intel is using the Thermal Velocity Boost numbers for its PL2 performance profile so Adaptive Boost Technology would further raise the PL ratings for 11th Gen SKUs.