Vikings are somewhat in the fashion at the minute. Whether it’s the psychological anguish of Hellblade, the tactical mastery of The Banner Saga or the brutal combat of God of War, the Norsemen have never been more popular in video games. And with that esteem there comes the games like Dead in Vinland.

Cloaked in a veil of Viking imagery, Dead in Vinland is a turn-based survival game. As a family of four shipwrecked on a foreign shore, you must manage the collection and distribution of vital resources to keep everyone alive. Unlike other group survival games, like This War of Mine, losing a single character is a fail state and ends the campaign. While I personally prefer games that force you to live with the consequences of your decisions, there is a reason for it in Dead in Vinland.

Forgoing the pure emergent storytelling that these survival games were built on, Dead in Vinland treads a narrative through its campaign. Each of the four characters have personalities and relationships to one another, as well as parts to play in the story. They cannot be buried or burnt and forgotten.

Introducing a story focus, complete with a dialogue system familiar to any RPG fan, adds a certain level of intrigue the game that kept me going through the initially dreary tutorial. Knowing that there were scripted events and a sense of things to come kept me engaged. Which is good because the systems of play are little cynical. Each day is divided and you must manage your resources and assign tasks. It, at the beginning at least, feels a little overcomplicated and overwhelming though with the satisfying payoff you might at expect. Each character has a dozen charts worth of various stats that look ripped straight from a tabletop RPG, including four health bars such as fatigue, depression and injuries. This mountain of stats is meant to be taken into account when the players assign chores but at the start of the game, it's hard to know exactly what is happening.

But by the second day, Dead in Vinland starts to take shape. Exploring the island reveals hints that you might not be alone and soon enough you get your taste of combat. The combat in Dead of Vinland is great fun and feels almost like Darkest Dungeon with a splash of Gwent for flavor. Characters are either in the ranged or melee row and have a selection of skills to use on their foes. And like Darkest Dungeon, combat carries long-term effects for the characters who can be left battered and broken and more likely to die as a result.

Again, it almost feels like the characters were meant to feel disposable, but the game's persistent plot overrules it. In my first encounter, the youngest and most agile of the group received a head wound, dramatically reducing her performance and potentially risking the whole game before it really took off.

But wounds can be mended and the camp upgraded to help overcome more difficult enemies. Hunting, healing, foraging, exploring, gathering water and building are all necessary parts of life here, with each chore and its subsequent structure capable of several individual upgrades. Before long you’ll have more chores than you have characters and that’s when the mechanics really start to take shape. Like other survival games, Dead in Vinland creates a worsening situation, as players have to balance more and more issues on their plate. You’ll face surprises both good and bad as the map reveals itself and you spend more time building your network, but the story keeps the bigger moments more predictable. There is more to this game than I want to mention. Tied to the story there are a few nice extensions to the formula that keep it interesting through your stay in Vinland. But it was really the combat that makes the game shine.

While the character design is impressive, with so many statistics and gauges to consider, the best part of the game was the combat and its accessible interface. There is truly a lot of depth to it and, with buffs and supports to consider, the core fighting is fun and not overcomplicated (unlike the survival mechanics).

Dead in Vinland is a surprisingly engaging game. While it might not try as hard as it should to captivate its audience from the beginning, a little persistence on the player's behalf opens up a great Viking game. Its hand-drawn animations are lovely, and the several backdrops display the brutal landscapes with a hard, cold beauty. It might not be God of War in look, tone or feel, but Dead in Vinland has a bit of true Viking blood in it and can easily carry Odin’s mantle further into the video game medium.

Review code provided by the publisher. You can purchase the game via Fanatical. 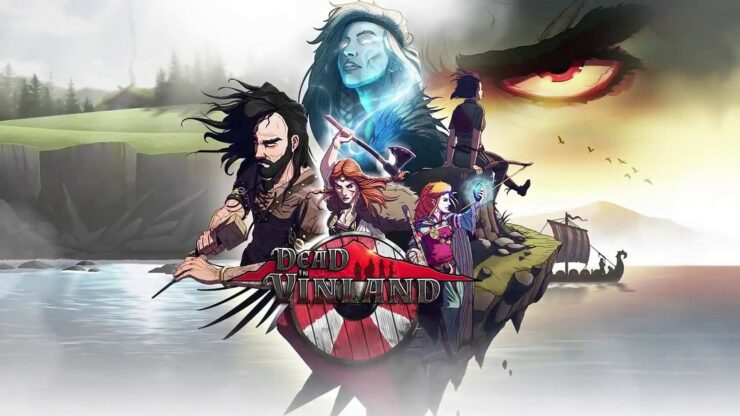 Dead in Vinland is a Viking game in the style of Darkest Dungeon. It's fun, well paced and slightly overcomplicated, but ultimately worth it.