Kratos has always felt like an anti-hero with only a singular desire to act out in a rage with no recourse for those around him. This much was evident in the past God of War titles that remained one of Sony’s strongest exclusive action series. Now, years have gone by since the Ghost of Sparta left the Aegean Sea behind for a reclusive life in a new land with a new family. Can the God of War find comfort in his new surroundings, or is Kratos a man out of his element? 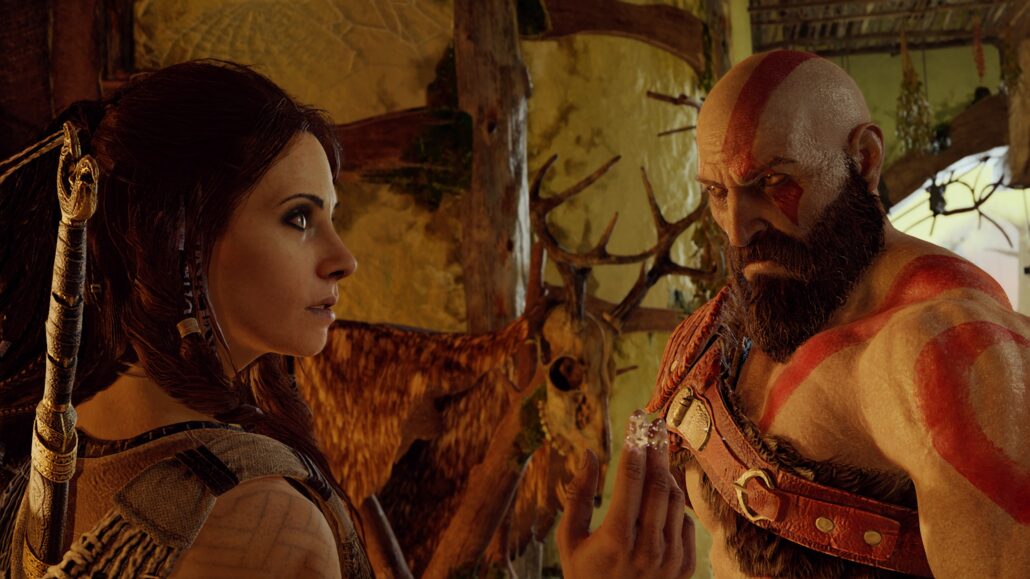 God of War is all about The Journey, a path that Kratos and Atreus walk not for vengeance, but rather to lay his beloved’s ashes to rest upon the tallest mountain peak in Midgard. That journey begins with Kratos laying his wife’s remains to rest within a funeral pyre of logs carved down with the Leviathan Axe, a new tool in Kratos’ disposal that was gifted by his late wife and the replacement for the Blades of Chaos that Kratos had previously used to bring the demise of many a Greek god.

The Norse pantheon may be as numerous and expansive as the Greco-Roman mythology that Kratos was once a part of, but the cast to God of War is fairly focused by comparison. Once a man known early on as The Stranger forces Kratos’ hand to once again take up his lust for blood and violence during the journey to scatter the ashes of his recently departed wife, the cast of characters that guide and inhibit the god of war’s journey slowly reveal themselves to the player and last throughout much of the story. Those that took a supplemental Western mythology course in school might already recognize a number of the cast members, but God of War’s plot does a fine job of making Kratos feel at home in Midgard while still keeping a few story revelations hidden throughout the journey. 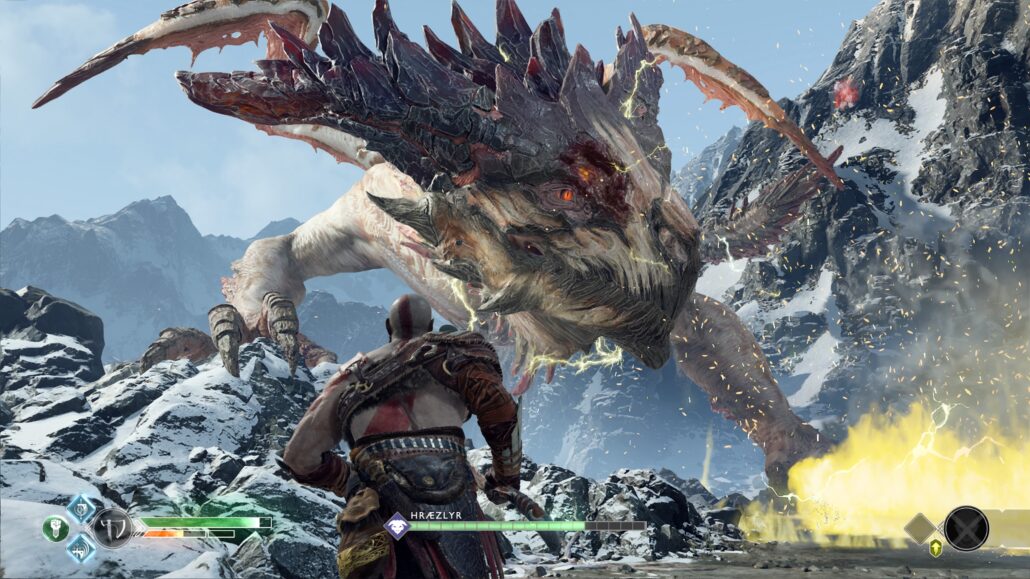 Kratos’ shift in perspective to an over-the-shoulder viewpoint, ala God Hand, might take some getting used to after playing the past six games in the series looking down upon the God of War from the heavens. By keeping the action focused closely on the camera, the entire adventure feels much more personal and not just on the battlefield. The entirety of Midgard being shown in one single continuous shot is a major change from the series’ typical quick cuts and panning cameras to showcase the expansive, yet ultimately linear, environments of past games. For areas that would only be trekked across once or twice in past games were suited for the camera angles that could let players see the environment team’s labors. With 2018’s God of War, players can explore the environments at their own pace in between major story moments, taking in the breathtaking sights (even more so when playing on a PlayStation 4 Pro console and using an HDR compatible display) as often as they like.

The various realms that makeup Midgard are each varied in color and style, but all share a unified theme: this is a land long since forgotten by gods. Those familiar with Norse mythology should already be well-versed in the labors of Odin and the Frost Giants that were so important in the formation of the world. God of War builds upon those popular mythologies by allowing Kratos to see the aftermath of a world that has yet to witness Ragnarok while not being as strange a mixture of Spartan and Norse lore as one might first assume. If this is your first time learning about Jormungandr the World Serpent or Dwarven blacksmith brothers Brok and Sindri, consider God of War to be an important lesson of lore. 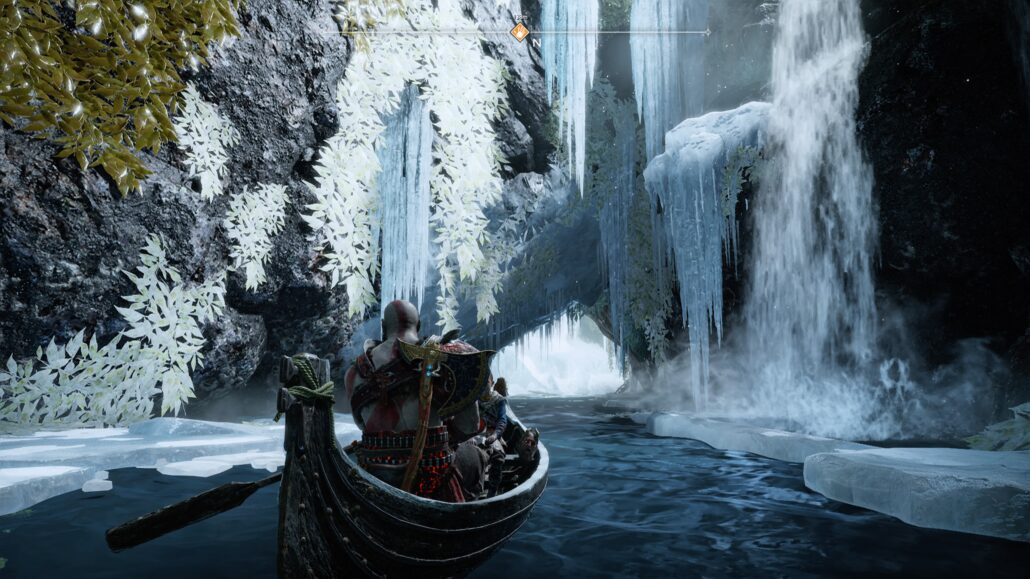 By taking on a fatherly role, the God of War’s mentality no longer sees the world in shades of red. Not every situation in Kratos’ life needs to be solved with brute force, as his journey with Atreus gradually reveals. The Kratos of Grecian lore wouldn’t hesitate to bring a temple crashing down or slaughtering a god if it prevented him from reaching his goal. That singular focus still lingers in the back of his mind, but the journey he undertakes is something that sees real growth in his character. Much of the dynamic between Kratos and son harken back to a previous Sony title, The Last of Us, each dealing with the lead character being thrust into a fatherly role and slowly developing a lively dynamic with their partner, in this case, young Atreus.

Having been stripped away of the many weapons Kratos had gathered throughout his long journeys in the Aegean Sea, much of his fighting comes by way of a magical Leviathan Axe gifted to him by his former betrothed, a shield taken from his Greek adventures and his own two scarred fists. Those two hands that have seen the ends of many a god and don’t feel any less effective than Atreus’ arrows or the Leviathan Axe. The brutal combat flows well, from throwing the ax towards a far-off enemy, using the shield to counter and parry a well-timed strike, pummeling a foe with a few quick strikes, and recalling the ax to continue the attacking streak. No matter how you initiate a brawl, the tools in Kratos’ disposal are indeed the very best in the series and everything flows from one ability to another with no lull in the action. In addition to having a skill tree that accrued EXP can be invested into unlocking new abilities, but new Runic Attacks, both Light and Heavy, can be added to the Leviathan Axe to add in completely new attacks that can drastically alter the flow of combat in his favor. 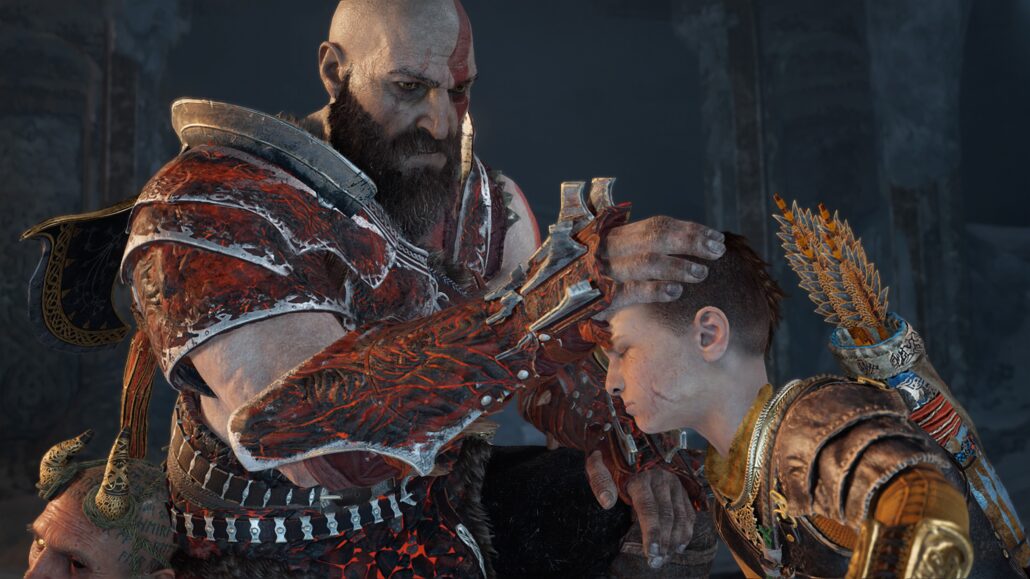 God of War’s premise has a sidekick accompany Kratos along his journey, so I was concerned that there would be no small amount of hand-holding or escorting that had to be done. I was pleasantly surprised with how much Atreus was able to fend for himself and actually complement Kratos’ brash style by adding in some contrast of his own. As Kratos grows into a fatherly figure during the course of the journey, so too does Atreus and this carries over into his combat aptitude. Atreus is smart enough to act on his own, or at Kratos’ request and the use of the square button, he can fire arrows or summon spectral familiars during combat to make quick work of enemy spirits and beasts. All of this can be seamless in the combat and leads to some impressive combos, as fluid as they are deadly.

All too often, a side path may lead to a small piece of treasure or new gear for Kratos to wear. The manner of gear upgrades is something new to the God of War series, giving Kratos a fair amount of customization to optimize his killing prowess depending on the player’s fighting style. New pieces of equipment across three inventory slots each offer preset stats and passive/active abilities and can be socketed with a number of gems, some granting randomly generated gains. Each piece of gear can be upgraded through the use of excess cash and enemy drops to increase their effectiveness. Kratos now has a combat rating or level that aggregates all of his numerical stat boosts from his gear to gauge his ability in combat. With only less than ten levels, it’s a fairly easy system to keep track of and enemies more than a couple points in either direction of Kratos’ level wind up either being a pushover or nearly impossible to overcome. 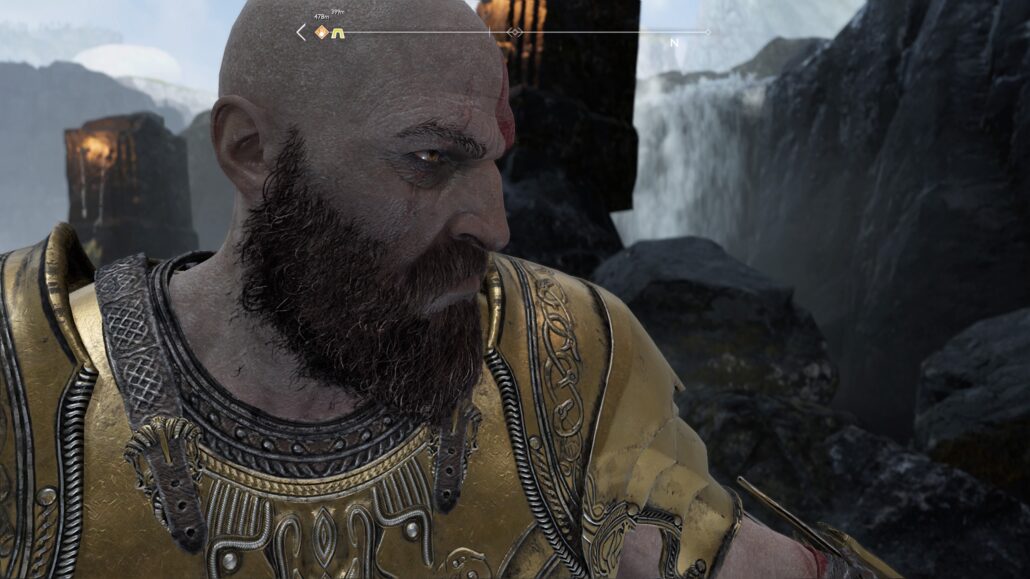 New tools to get through, as even minor upgrades such as a new arrow type for Atreus can open new doors along the journey. Every area in the nine realms is filled with surprises that invite Kratos to return with new pieces of equipment in a feedback loop that triggers that same sense of discovery that Metroid once instilled within me growing up. Players that simply follow the story beats are sure to miss some of the more awe-inspiring scenes to behold within the realm of man. Entire islands and areas are not far from the beaten path, sometimes requiring the aid of a sidequest or essential piece of gear that Kratos has picked up along the way.

Some may say that Kratos’ journey lasts only a mere fifteen hours, and that could be true provided you ignore all the rest that Midgard has to offer. Along with my own personal journey, I logged more than forty hours as the bearded Spartan, exploring all that the nine realms atop the Yggdrasil Tree kept in secret. Without being diligent and solving the puzzles that lay along a side path or picking up a side quest from a fallen spirit, the journey that Kratos undertakes only sees a fraction of the world. Sometimes, when there isn’t a sense of urgency to rush to the next story objective, it’s nice to just hop into Kratos’ boat and head in a direction you haven’t otherwise seen. Once fast travel is an option, returning to previous venues with a new tool can open up entirely new sections of each area for new loot and lore. 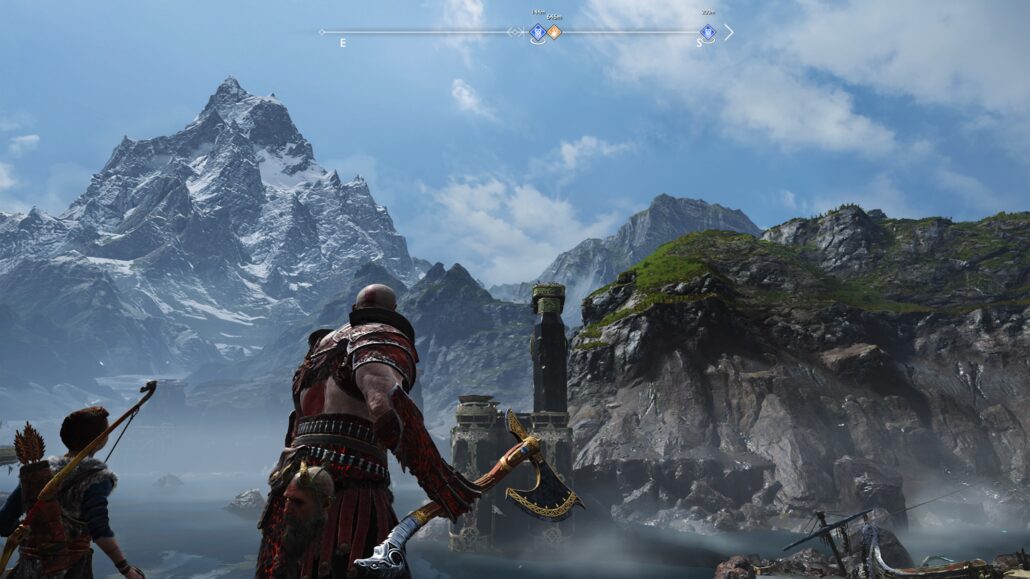 I would have overlooked two of the realms that exist solely outside of the path along Kratos’ journey. Muspelheim and Niflheim, each entirely new realms that are locked away by Odin’s wishes and the cipher keys scattered across Midgard in pieces, bring something new to God of War that players should certainly track down. One realm consists of various combat trials and challenges that can imbue Kratos with legendary armor and enhancements earlier than any other point of the story, while the other is an ever-changing realm of poisoned fog and randomly generated rooms that require numerous visits to unlock all of the secrets within. Each is also home to a certain type of superboss that requires everything that Kratos and Atreus can throw at it to overcome.

God of War proves that if there was anything that Kratos learned during his time in Grecian lands, it's how to have a proper adventure. Now that he is a little bit older, wiser, and more experienced, it's time for him to start to pass the torch on and become a family man.

Reviewed on PlayStation 4 Pro. You may purchase the game on Amazon.