I'm not the biggest fan of indie games, though I appreciate what they bring to the game industry in terms of creativity, experimentation and overall variety of the market.

If all independent games were like Hellblade: Senua's Sacrifice, though, I reckon I'd love them dearly. Granted, Ninja Theory isn't your average independent game developer with over a hundred employees and other projects in the works, including some being made in collaboration with publishers.

However, their "independent AAA" proposition with Hellblade definitely sells the idea that indie games can be as polished and appealing as an AAA game, in stark opposition to the stereotype of indie titles being rough, unfinished and buggy. This all starts with the visuals, of course.

While there are many indie games made with the Unreal Engine 4 nowadays, none are nearly as striking as Hellblade in this regard. In fact, I'd venture out to say that this game, at least when played at 4K resolution and max settings on PC, is a better showcase of the Unreal Engine 4's graphics capabilities than even Epic's own titles Paragon and Fortnite. I can't wait for the developers to add support for HDR displays because this game really begs to be played that way.

The lighting, reflections and rendering of materials are particularly stunning, but Hellblade is no mere show of technical prowess. Ninja Theory's artistic team is to be commended as much as the coders for the amazing visuals, for they were able to conceive some truly breathtaking landscapes and vistas. There's a built-in Photo Mode, but NVIDIA users on PC have the edge thanks to Ansel support, with which I captured the screenshots you can see in this article. I expect that this game will be a favorite when it comes to creating beautiful image galleries.

I would be remiss if I didn't mention another highlight of Hellblade's fantastic presentation. Ten years ago, Ninja Theory impressed me with the best example of facial animation at the time in Heavenly Sword. They haven't lost their touch, to say the least, and I would say that Senua's facial expressions managed to cross the uncanny valley.

In Hellblade, everything has been masterfully designed to maximize immersion. This includes the audio, for which the game recommends using headphones for binaural sound each time you'll launch it. It's a sound recommendation and one you should probably follow, although wearing headphones with the heat that's sweeping over many countries in this time of the year may not be that comfortable.

Still, even without the headphones, Ninja Theory succeeded in doing everything it possibly could to bring players into the story of Senua, a troubled young woman from the Viking Age who goes on an impossible journey into Hel to rescue her dead lover's soul.

Hellblade expertly weaves the allure of Norse mythology with the all-too-real issue of psychosis, thanks to the help of neuroscientists. While on the surface Senua is fighting all kinds of warriors and Gods in her epic quest, the real fight is the one taking place in her own mind, which is something that's even explicitly stated in the game multiple times: real battles are not the ones fought with the sword, but with the mind.

In terms of gameplay, both are well-made. I've always enjoyed Ninja Theory's cinematic combat (yes, including DmC: Devil May Cry) and Hellblade takes it to the next level. Granted, it's not the most complex combat system you could find, but it is at once both challenging enough and never really frustrating. There's also a smart auto-adjusting difficulty level on by default, though you can choose to go with the usual Easy, Normal or Hard in the options.

What's most important is that combat feels punchy and satisfying at all times while retaining a unique cinematic flavor to it, partly due to the close camera. Particularly when facing several enemies at once, it reminded me of the best sword duels seen in movie history, those where the hero or heroine moves among foes like in an elegant and deadly dance.

Senua can deliver a light and a heavy attack with her blade. She can inflict a leap attack by running before drawing the sword; defensively, she can dodge attacks or parry them with the sword. A normal parry won't be of much use, but a perfectly timed parry will stun the opponent and open a window for a counterattack. The most important tool is perhaps the ability to focus and slow time, which comes in handy against tough enemies and at times will be the only way to inflict damage.

Hellblade also has some interesting mechanics when it comes to death. First of all, given the complete absence of any HUD, Ninja Theory envisioned another way to provide feedback on the main character's health. After receiving enough blows, Senua will drop to the ground much like a boxer would and you'll have to quickly get her up again before the enemies can deliver a killing blow. Interestingly, the voices in her mind play an important role in combat, too, where they encourage Senua to get up, noting that she can still do it despite being injured; similarly, they'll call out enemies behind her about to strike Senua in the back.

If you die (which doesn't necessarily have to happen in combat), though, the game warns you that with every defeat the darkness will spread in Senua starting from her arm and that upon reaching her head, all progress will be deleted.

This has been disputed to be false by early reports, though there are others claiming that they did get their save file canceled. Regardless, even if it was only a trick from the developers, it would be perfectly fitting given how much of the game is centered around the dichotomy between what's real and what isn't. The only point that matters, and one that is definitely achieved through this game design decision, is adding tension.

Hellblade alternates combat with a couple different takes on puzzle-solving, which will challenge you to observe the environment very carefully. These aren't the hardest puzzles ever designed for a game, but they're clever and they can potentially get you stuck for a while, especially because there usually aren't any hints at all to be found. Even so, the puzzles also fit the game's vibe and setting very well.

Truth to be told, there's a level of repetition in both the combat and puzzle sections of the game, but not any more than in most games, so I don't see it as a major flaw at all. On the other hand, the game's ending left something to be desired in my opinion - it seemed like Ninja Theory was perhaps trying a little too hard there and the result is a bit confusing.

Nonetheless, the journey matters more than the destination, and it was an amazing journey. Before wrapping up, a couple technical notes. First of all, I've talked earlier of how visually arresting Hellblade is in every way. That said, it should be noted that the game's environments are quite small by today's standards, not to mention that environmental interaction is non-existent - Senua will pass through blades of grass with no reaction whatsoever, for instance.

This doesn't detract at all from the visual splendor that Hellblade is, but once again, Ninja Theory was very clever to focus all of their care where it would matter the most for the type of game they had in mind. Performance wise, Tameem Antoniades told us that it would take an "absolute beast" of a PC to play the game at 4K and 60 frames per second, and he was right. With a GTX 1080 GPU, I had to drop to High settings at 4K in some scenes, and there were still some slowdowns every now and then, although they didn't have any impact on gameplay as Hellblade is not that fast paced.

If you want to play this game at Very High settings while maintaining 4K and an average of over 40FPS, you'll need a GTX 1080Ti graphics card. 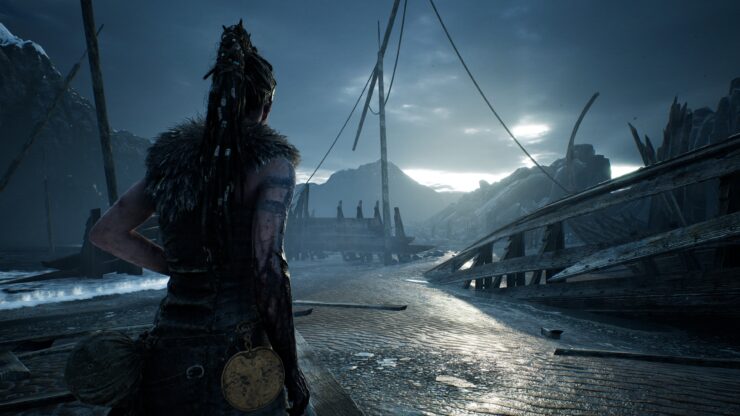