While Elgato makes one of the most recognizable brands in game capture equipment, it's been AVerMedia that's held my attention over the years. I'm now on my fourth capture card from them (even my humble Live Gamer Portable is still working and used for tournament setups to this day) and each one has been a notable upgrade in my game capture quality. Their latest product, the GC555 Live Gamer Bolt, matches the power of the internal Live Gamer 4K that I use every day and packages it up in a simple external design that isn't out of place among the other pieces of tech on my desk.

If you're serious about content creation or getting into streaming, eventually you're going to need to upgrade from the tools built into the Xbox One or PlayStation 4. The video quality on either of those platforms, while serviceable, is laughable compared to the production qualities of the most-watched influencers on Twitch or Mixer. When gaming is more than just an idle hobby, your'e going to need hardware that can show it off properly and that's where capture cards and boxes come into play. These simple devices can take in any standard HDMI signal and record it at quality levels that far exceed the consoles' simple offerings. The same goes for gamers on PC that play the likes of League of Legends or Valorant at framerates in the high-100's or 200's. You're going to need a device that can capture every frame for your highlight reels. Whether you go with an Elgato, AVerMedia or Razer, it's important to find a card that can capture what you're playing and work for years to come.

What makes the Live Gamer Bolt such a unique device is in its connectivity. Adorning the rear panel are the most minimal of connections: HDMI 2.0 input and outputs, a 3.5mm line in for importing microphone or audio mixer, and the USB port. Sorry, scratch that last one. The Live Gamer *Bolt* runs exclusively off of a Thunderbolt 3 port in order to drive the bandwidth required for its highest settings. For content creators that run on a recent Intel-based setup, chances are you may already have access to Thunderbolt 3 on your motherboard. AMD users are another story. It took the better part of a week and a couple hundred dollars to find the right equipment to handle the Live Gamer Bolt. For those of you in a similar situation, I wound up upgrading my Ryzen 7 2700X onto an ASRock X570 Pro4 board that came with a Thunderbolt 3 header along with a Gigabyte Alpine Ridge add-in card to add two Thunderbolt 3 ports to my rig in the home office (don't forget to enable Thunderbolt 3 support in the BIOS!).

Limiting the connection to a yet-to-be-adopted industry standard may alienate some of the potential userbase, but AVerMedia has a very valid reason for doing so. In order to transmit and capture (and not just pass-through) 4K60 content with HDR, a USB connection is sufficient, as is evident by Elgato's recently released 4K60 S+. It's the higher framerates that Elgato's external capture box doesn't even touch that give the AVerMedia a unique advantage. Boasting both maximum resolutions of 1440p144 and 1080p240, the Live Gamer Bolt can capture gameplay far beyond what modern consoles can output. This small HDMI capture box is what you'll need if you want to start capturing those Valorant skill shot montages from a second PC.

RECentral 4 (updated to v. 4.5.0.15 as of writing) still runs the brains of the operation for the AVerMedia Live Gamer Bolt. This extra piece of software lets users customize the finer details of their capture card, from the HEVC/H.264 codecs to bitrates and keyframes. While the device is supported in other capture programs such as Streamlabs OBS or XSplit Gamecaster, you'll get the most control with AVerMedia's own control deck. The backend has been improved since I last checked it out for the Live Gamer 4K and while the software looks largely the same, some of the finer controls are newly added as well as HDR Live Preview or the capability to record 4K60 gameplay while streaming at 1080P60.

Aesthetics aren't usually something that I rate a capture card on but since the Live Gamer Bolt is an external device, it's worth mentioning nonetheless. The small square design features rounded corners and a diagonally-cut top panel that houses a silent fan to keep the internals operating at a cool temperature even under high load. Both the front opening that serves nothing more than a design choice and the rubberized stand both feature an array of LEDs that give the Live Gamer Bolt more personality than just a simple black design. These LEDs come with a couple of basic effects (breathing and hue cycling) but given the size of the LEDs, offer a chunky appearance that doesn't quite match the sleekness of Razer's Chroma suite. Instead, I recommend leaving the effects turned off so that the Live Gamer Bolt displays solid colors to indicate recording status (as usual, the solid red indicates a hard stop or issue). If there was any sort of RGB integration with my motherboard or other devices, I would recommend that instead but the LEDs on this device simply don't play nice with other pieces of software.

The Live Gamer Bolt is being released at a very unique time in console gaming. Current consoles are limited to output at 4K60 in only the rarest of settings and come nowhere close to utilizing the full potential of AVerMedia's latest capture device, meaning this particular card is best suited to capturing from a secondary PC that can show off those high frame rates. At the same time, if you're running an AMD Ryzen setup for your capture equipment, trying to find a Thunderbolt-supported motherboard is a real treasure hunt. What AVerMedia has created is a piece of tech that should last for years to come as game companies move into the next generation with more powerful hardware. 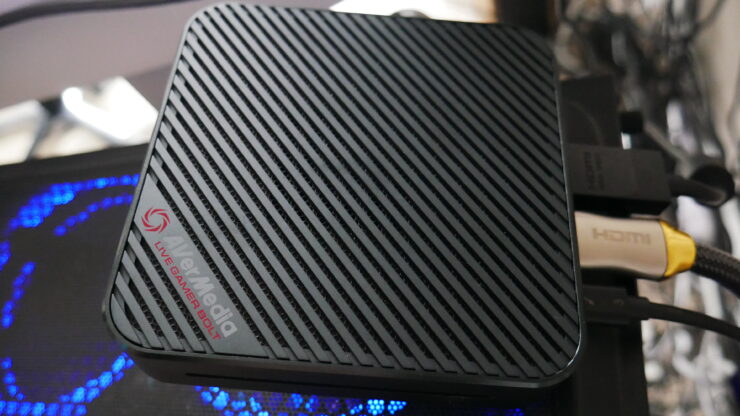 The Live Gamer Bolt is the highest performing external capture card for gamers on the market, but the high price tag and Thunderbolt 3 requirement make it a costly investment to add to an influencer's streaming setup.

Elgato Stream Deck at its Cheapest Price Yet!