Resident Evil 4 has been available for purchase on Steam for quite some time, allowing PC players to enjoy one of the best entries of the series, The PC port of the game is far from being one of the worst consoles to PC ports, but things can always be improved. And this is exactly what a dedicated fan is doing right lately with the Resident Evil 4 HD Project. 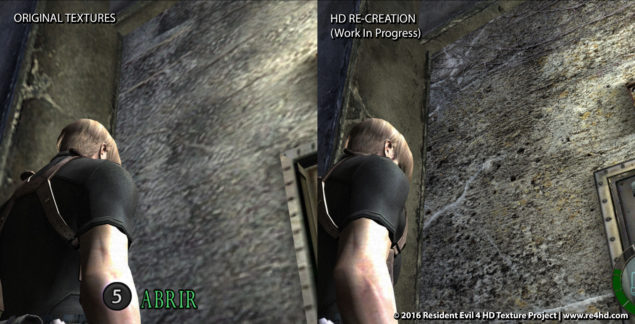 Remaining committed to the original visuals. Our intent throughout the project is to remain true to the original visuals and artistic intent. The best kind of feedback we receive is when people say that the game looks like what they *imagined* it to look like when they first played it 10 years ago. While we are not perfect, we continually refer back to the original texture assets to ensure we do not deviate in a significant manner.

Development is proceeding rather smoothly, with the man behind the project constantly updating fans with new screens and videos. The latest screenshots and video released recently showcase the recreation of two different rooms, highlighting the differences between the original and the HD Project. You can check everything out right below.

The Resident Evil 4 HD Project has yet to be released in full, but it's already possible to download the Village portion of the project. With it, players can play through the entire Village section until Leon and Ashley reach the castle.