Have you ever wanted to be Malcolm Reynolds? How about Han Solo? It's a silly question, I know. Of course you have. Well, here's your chance to enter a real space-western, choose your own path and make your way as a pirate, trader, miner or bounty hunter. All while you try to find your aunt and unlock the secrets of a mysterious artifact she's left you in a vast procedurally generated universe. 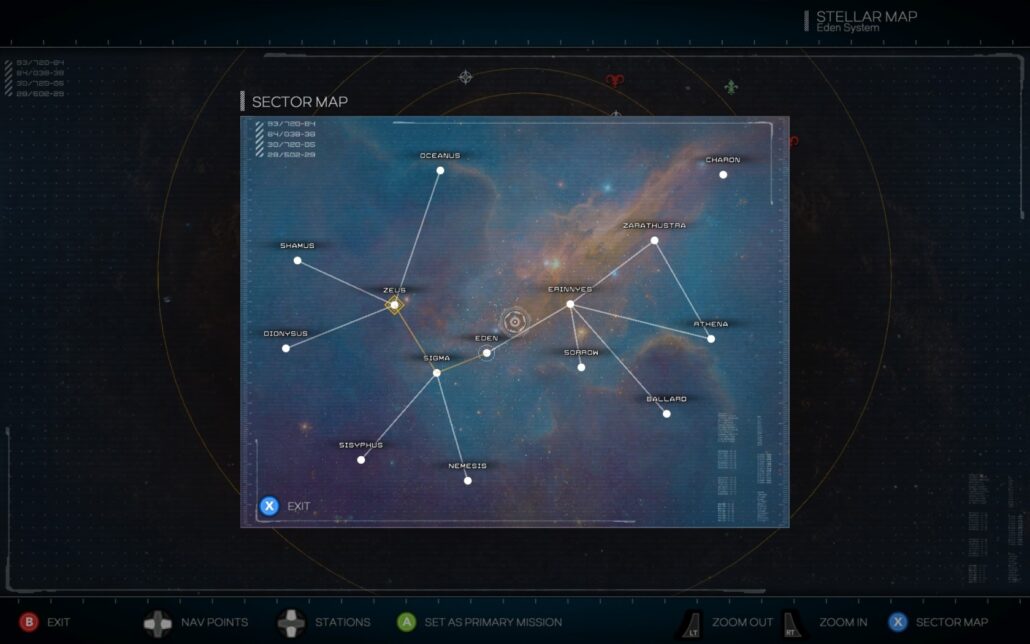 Rebel Galaxy really manages to set the scene of it taking place in a space-western universe through an absolutely outstanding soundtrack, the highlight being a number of tracks by Blues Saraceno. A number of the other tracks are equally brilliant to listen to. Everything fits in well and, to top it off, you have the option of adding your own music to the list of tracks. Though I didn't find Wham as a great link to whoosh-bang-boom space battles.

Where I have found myself really enamored with Rebel Galaxy is that, making a nice change to the genre, it's actually very simple; think of it as the arcade version of your X's, Elites and other such games. Sometimes the ability to just jump in and just worry about the horizontal, not the vertical, is a brilliant thing. What you'll find is that the game plays very much like a naval combat game, you're on a fixed plane and even though the galaxy around you, enemies included, can exist in the vertical and fly around you, you aren't hindered as a result. 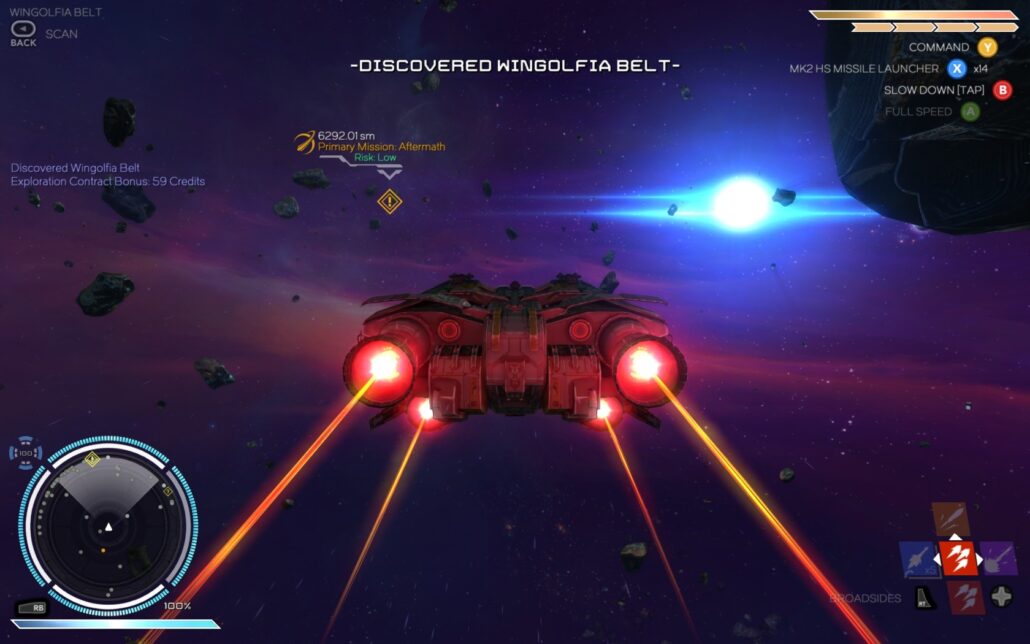 What makes battles all the more easy is that while your ship can have up to eighteen different weapons, split into five distinct groups: broadside, secondary main, missiles, beams and turrets. You only need to be in charge of the broadside and secondary weapons at any one time, the AI takes care of the rest. The AI also controls a mercenary wingman that you can hire and will attack targets based on specific commands you set. What this means is that should you want the AI to only use missiles on capital craft ships, then that's what you set. It's a simple but very effective system and lets you focus solely on using the big guns and avoiding damage.

Avoidance is essential in the early stages, specifically because the game never really tells you how much of a threat a ship is, only color coding your current situation. Combine this with the fact that your shields and armor aren't quantified, so by the time you've noticed that you've bitten off more than you can chew, you're basically already dead. Later on, with the larger ships, tanking the blasts while using your deflectors is a viable tactic and lets you just watch some of the most impressive light shows you'll find in a space combat game. This is especially the case when you jump in the middle of a fight between two factions as part of a side quest, of which there are an infinite amount. 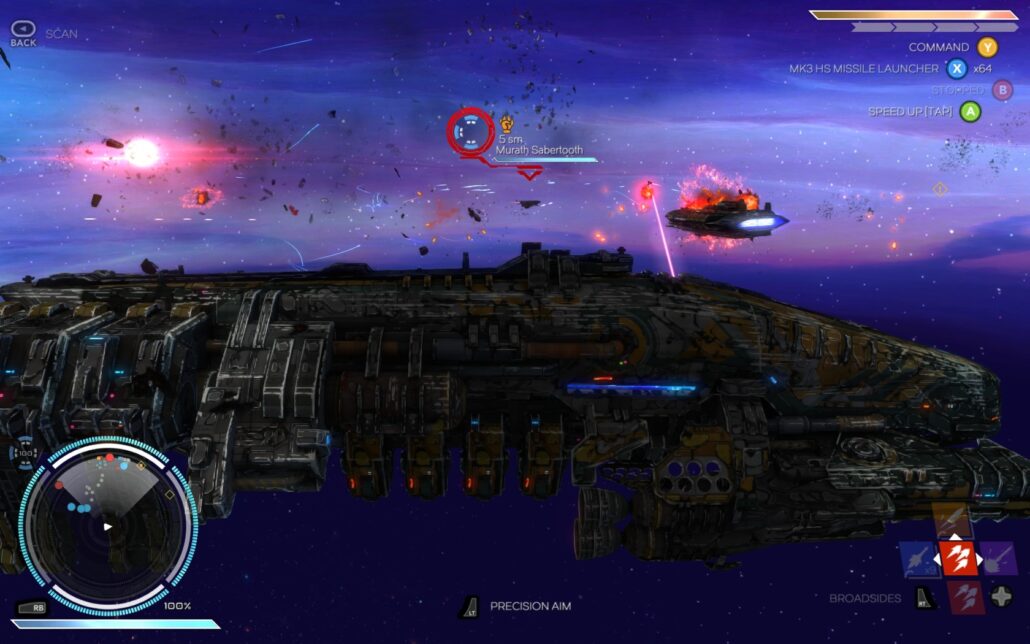 This is potentially the greatest selling point of the game for most people. Rebel Galaxy will last as long as you want it to and the larger battles are outstandingly fun. There are five factions you can encounter along the way: Citizens; Militia; Red Devil Cartel; Doublejack Thugs and Korian Outsiders. In addition, there are both a traders guild and a mercenary guild. This diversity is, however, hindered by the fact that despite the faces that pop up on screen being different, there's very little to differentiate one faction to the next.

While there is an underlying story, which offers a handful of missions, it is sadly anemic at best and is only there to give you a reason to visit the other systems that litter your end of the galaxy. It is, however, held together with some surprisingly brilliant voice acting and a small group of very colorful characters. This brilliant voice acting also extends to the random encounters that you come across when flying through space. Traders, pirates, militia and even the bartenders and guild masters all have at least a few lines of voice to listen to, though they have a tendency to repeat after a while. 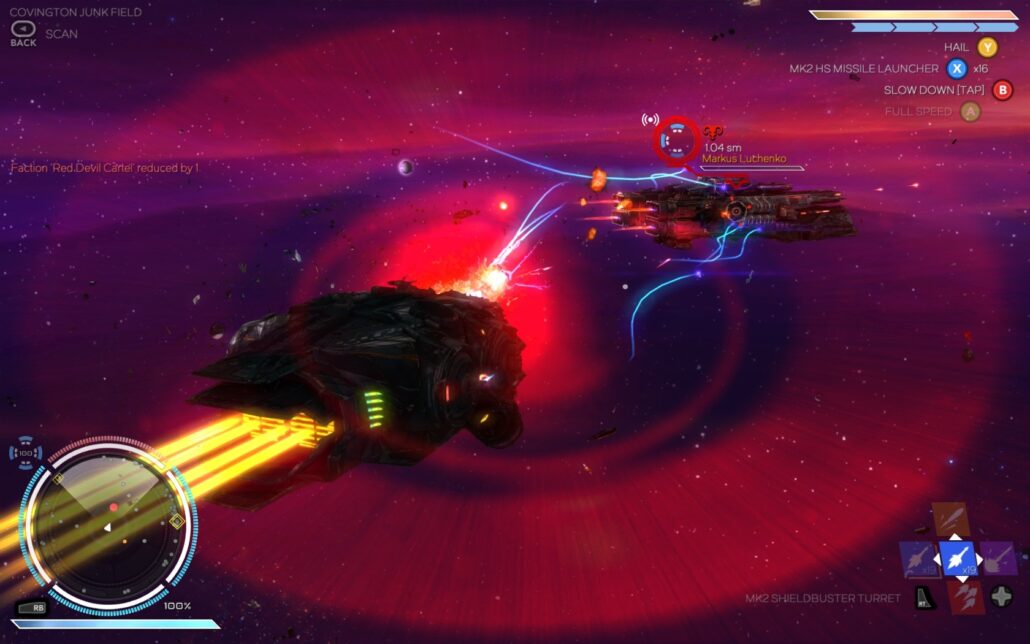 What hit me hardest during my twenty hours with Rebel Galaxy is a lack of purpose. There was never any real sense of urgency in between the primary missions and eventually I got downright bored of the randomly generated missions, mostly due to them repeating themselves but just in a different asteroid cluster that looked identical to the last. Despite the brilliant aesthetic appeal, it still makes you want for more. Missing are the likes of black holes, binary stars and shooting stars.

All I know is that, while I did have a few hours where I was genuinely bored of Rebel Galaxy, this was of my own doing by falling into the normal sandbox trap of doing too many randomly generated missions. Once I broke away, deleted them from my log and focused on the primary missions, the pure unadulterated joy of the combat reminded me why I had so much fun to begin with. That is exactly what Rebel Galaxy is: fun.

With a vast world with a huge amount to do, set in a space western and an outstanding soundtrack to accompany it, Rebel Galaxy has a simple but engaging and visually spectacular combat system. Rebel Galaxy has more than enough to keep you engaged, though best played in small doses.