After Samsung launched the Galaxy S6 and Galaxy S6 Edge yesterday with an all new 14 nm SoC and fingerprint sensors built in the home button, Qualcomm seems to have decided to remind us all that its still in the game. The US manufacturer has showed off some details about the Snapdragon 820 and an all new fingerprint sensor that could top Apple's TouchID for the iPhones. 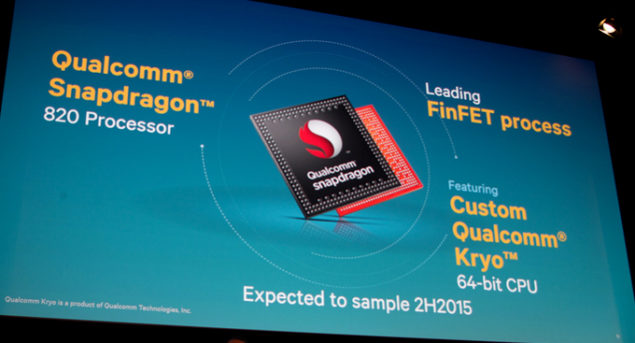 Qualcomm's Snapdragon 820, which has already featured in a leak earlier that detailed the company's product platform for this year, has been showcased a little by the manufacturer today. The Snapdragon 820 is expected to be built either on TSMC's 16nm or Samsung's 14nm FinFET process. Our earlier leak pegs the processor for Samsung's 14nm FinFET, which could be even more likely given that 14nm is available on the Galaxy S6 and S6 Edge and in all likelihood will be coming with Samsung's top tier devices this year.

While the company remained rather tight lipped about several details about its processor, our earlier leak seems to have gotten several things right. First of all, the Snapdragon 820 will indeed be manufactured on a FinFET process. Secondly, it will be using Qualcomm's custom designed cores, or core, with a new core highlighted by the company named as 'Kryo' based on ARMv8-A. The Snapdragon 820 will begin sampling in mid-2015 so we can expect devices to start shipping with the processor either by the end of this year or the start of the next.

Qualcomm also showcased its own fingerprint sensor that now seems to use technology more advanced than the one found in Apple's Touch ID for the iPhone. We all know Touch ID's problems if your fingers are a little smudgy, but Qualcomm claims to have solved this problem. Qualcomm's "Snapdragon Sense ID" can not only gauge your print if your fingers are we or smudgy, but it'll also be able to read your prints through different materials such as metals. It uses ultrasonic waves to generate a 3D map of your finger, making it much more efficient than Touch ID. Not only this, but its ability to detect fingerprints through materials now means that the sensor can be integrated directly into various sections of a device, rather than be build in a separate section.