As we near towards the end of 2015, there are a couple of top tier chipsets that are on everyone's mind. The latest of these is the Apple A9, which according to the company provides up to 70% increased processing performance over its predecessor. While that's yet to be tested, on the Android side of things we have Samsung, who's managed to gain a solid position in the industry due to the Exynos 7420, and Qualcomm, who's looking to move forward with the Snapdragon 820, which is said to come with frequencies of 2.2 GHz for its Kryo cores.

But while modern day SoCs from the likes of Qualcomm and Samsung might be able to cross 3.0 GHz on a mobile processor soon in the future, today we get to take a look at some Snapdragon 800 CPU Z stats which show the processor running on frequencies of 2.8GHz. The stock frequency of the processor is 2.23 GHz so its impressive to see a processor that has featured in devices for more than two years. 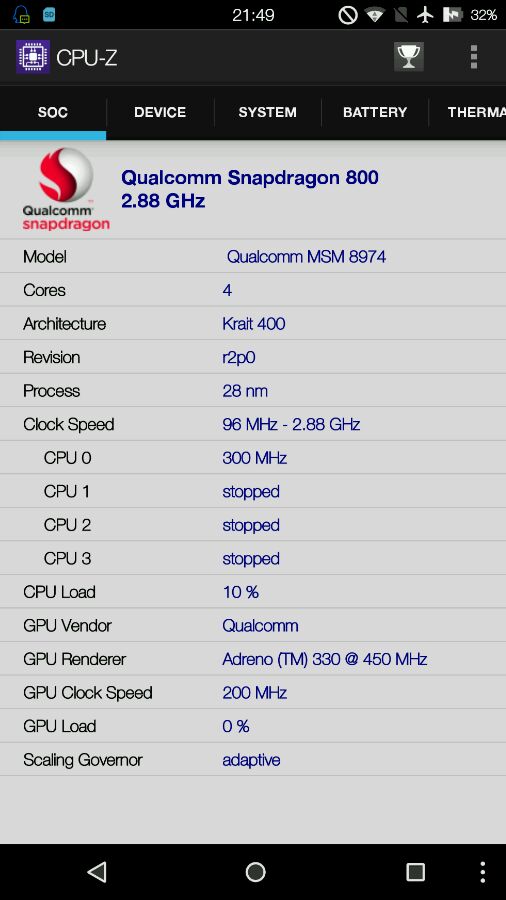 The Snapdragon 800 in manufactured on the 28nm hPm and was the first processor from the company designed with performance intensive applications in mind. While Qualcomm intends to move forward to custom made Kryo cores designed on Samsung's 14nm FinFET, its a breath of fresh air to see old hardware able to meet such criterion. And even though the Snapdragon 810 might be famous for its overheating, temperature readings for the Snapdragon 800 allegedly show an improvement over non-overclocked results.

The image above shows the processor running at normal temperatures prior to overclocking. While we won't be getting into the details of every single component at this time, just save this screen into your mind for comparison sake. The processor achieves only moderate temperature hikes when overclocked, though of course we wont recommend carrying this out for extended time periods as you'd most likely end up with an incomplete smartphone at the end.

The maximum temperature spike that we see is for sensor7, as can be seen above, which amounts to 32C. Holding a smartphone with sensors reaching temperatures of 85C isn't advised at all, but neverthless, when compared to some of the readings that we've seen related to the Snapdragon 810, we'd say Qualcomm gets a free chit on this one. What's more is that the Snapdragon 820 can be overclocked as high as 3 GHz, as can be seen in the image below. But we'd suggest shipping your stove out and using your smartphone in its place should you be advised to engage on such a venture.

With the Snapdragon 820 soon to be expected from the Qualcomm's end, the company should be expected to have some tricks up its sleeve if it want's to regain the top spot in the mobile processing world. Nevertheless, as long as top performing hardware is out there, enthusiasts all around will continue to take things to the next level. Thoughts? Do you think the Snapdragon 800 or other older chipsets from Qualcomm can be taken even further? Let us know in the comments section below and be sure to share any such numbers with us. We'll keep you updated on the latest.