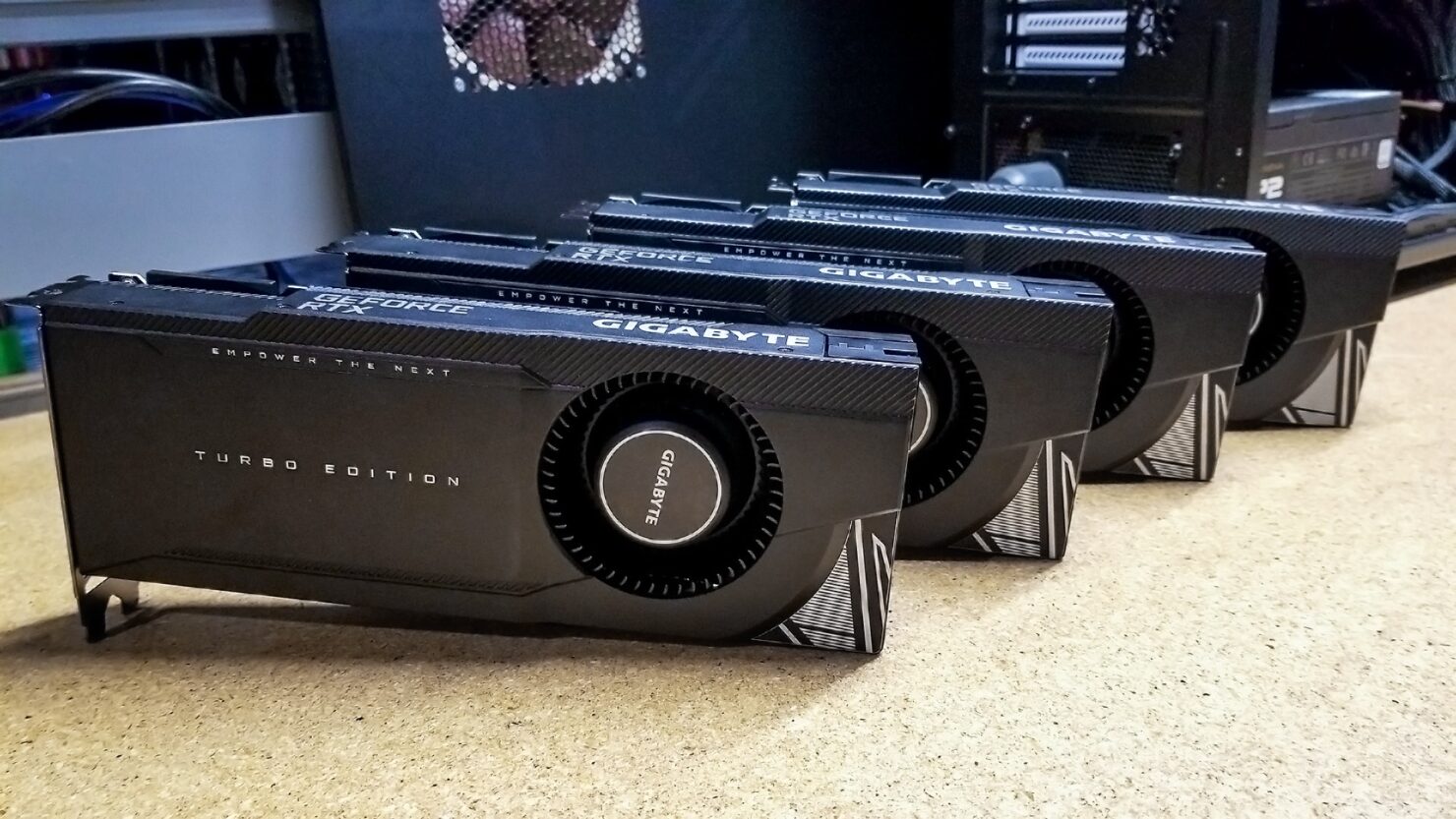 Puget Systems has released a new set of benchmarks in which they tested four NVIDIA GeForce RTX 3090 graphics cards together in a single workstation system. The test was used to showcase the performance potential of the RTX 3090 cards and how well they scale in professional apps for content creation.

The NVIDIA GeForce RTX 3090 is without a doubt the fastest graphics card on the planet but it does not offer a great performance per dollar proposition. The card with its 24 GB GDDR6X memory and insane specifications seem to be underutilized by games as evident from our report but there are workloads that can take full advantage of this beast of a card. 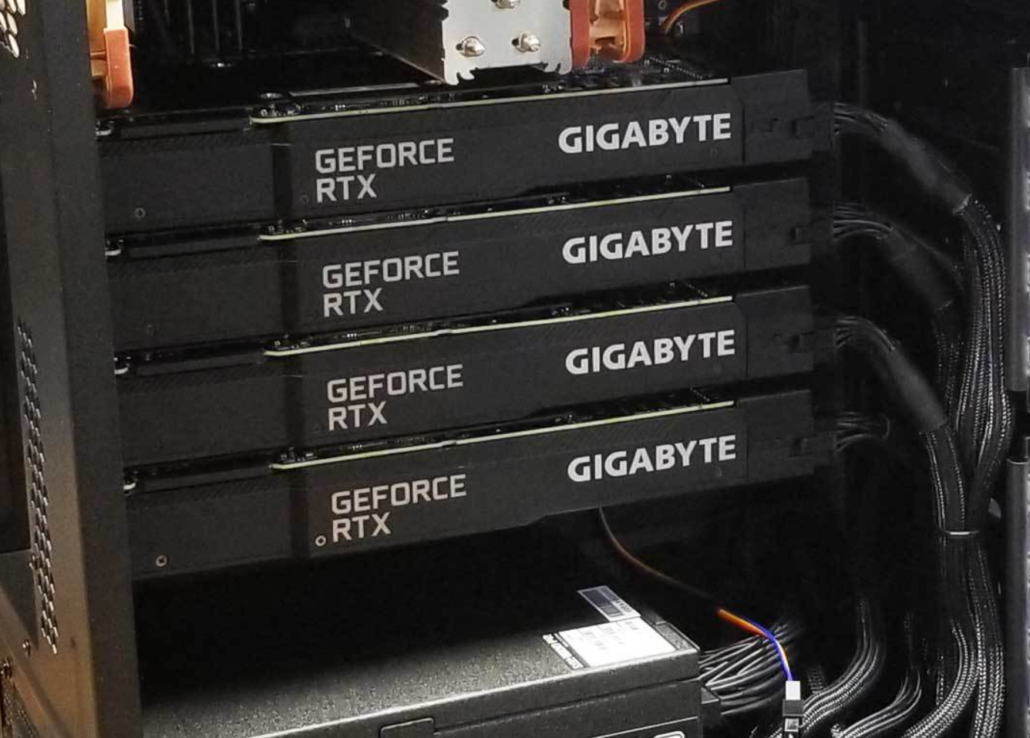 Puget Systems (via Videocardz) have released benchmarks of four GeForce RTX 3090 graphics cards running within a test rig which features an ASUS WS C422 SAGE motherboard that is equipped with the Intel Xeon W2255 CPU, 128 GB of DDR4-3200 memory, and a pair of EVGA 1600W power supplies since there are four Gigabyte GeForce RTX 3090 Turbo edition graphics cards to boot along with the entire PC.

The performance was measured within OctaneBench, V-Ray Next, Red Shift, and Puget Systems's own PugetBench for DaVinci Resolve. The four GPUs didn't have NVLINK enabled across them and were only communicating via the PCIe bus interface. The explicit multi-GPU nature allowed by professional applications lets users take full advantage of the four GPUs without any additional driver support.

In terms of performance in the said applications, you can note below that all benchmarks report near-perfect scaling for all four GeForce RTX 3090 graphics cards. The performance to begin with for a single-card is also notably higher than any previously released solution but having more than just 1 RTX 3090 graphics card can definitely help improve performance by a huge factor for users such as content creators who heavily rely on these applications. 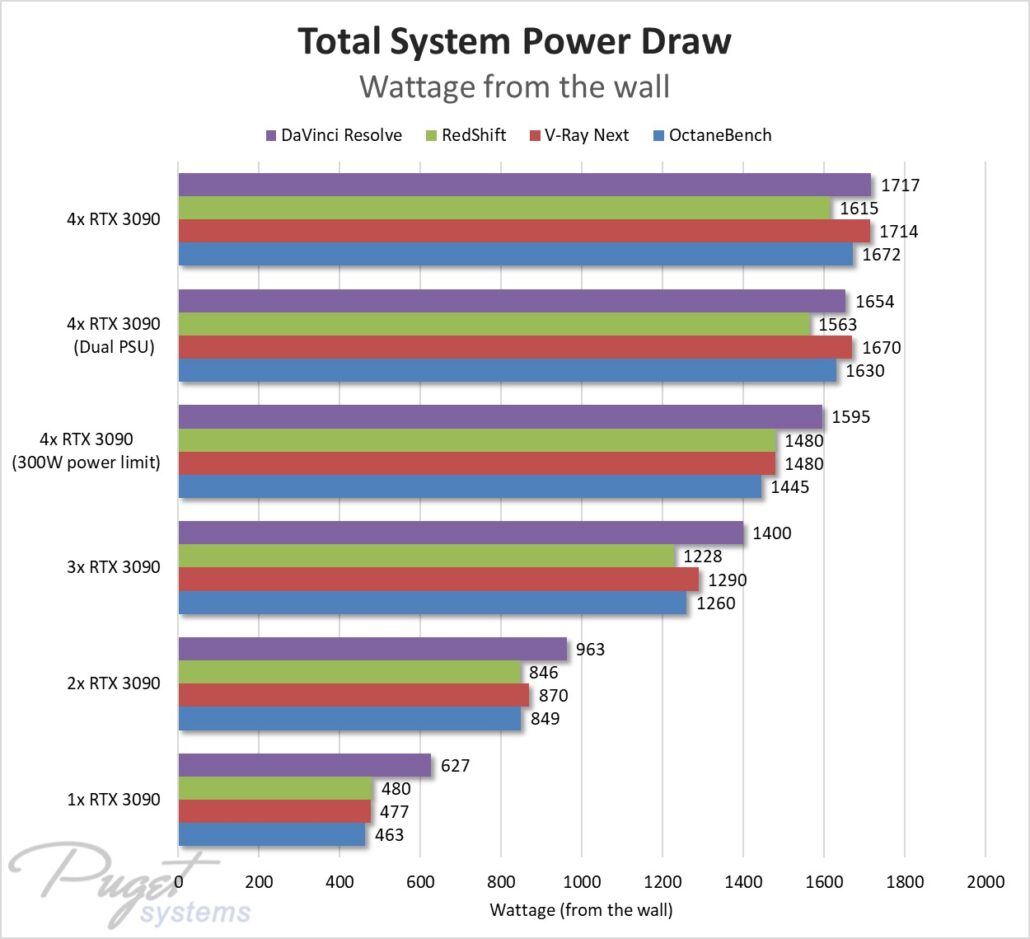 Puget Systems also provided us power consumption figures when four NVIDIA GeForce RTX 3090 graphics cards are fitted within a workstation PC. The system consumes up to 1717 Watts power but that can be improved by using a Dual PSU setup which increases efficiency and reduces power consumption by around 50-75W. The GeForce RTX 3090 graphics cards were also adjusted to 300W power limits with no notable performance dips but helped reduce power numbers even further down to 1600W which is a 100W+ drop from the standard configuration.

Surprisingly, the cards didn't hit temperatures past 80C but at the same time, the blower design meant that they were running quite loud. All fans were running at around 80-90% fan speed in 4-way configuration and resulted in a huge noise output which is demonstrated in the video below:

Once again, this use case will be suitable for content creation and workstation users who can take full advantage of the four GeForce RTX 3090 graphics ards within these applications. For gamers, even NVIDIA themselves have the GeForce RTX 3090 locked down to just 2-Way NVLINK support. Not to mention that just two RTX 3090s would cost $3000 US.