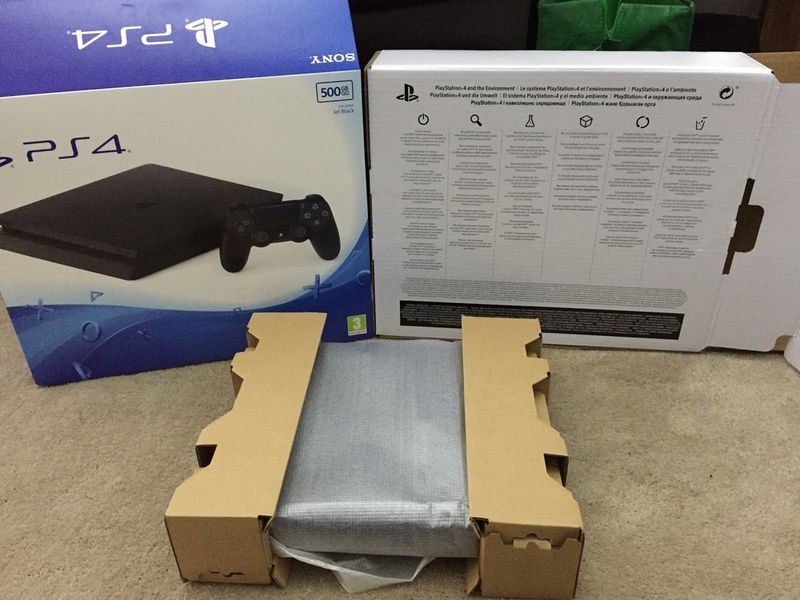 There is an ad running on the online UK classifieds and community website Gumtree right now (here) that is inviting buyers to purchase what the seller claims is Sony’s yet unannounced, upcoming latest PlayStation 4 Slim Line console. The alleged slimmer, redesigned version of the eighth generation video game console is going for £295 only with 500GB of storage. The buyer has shared some images, showcasing the box of the console from all sides, as well as the console itself along with accessories.

Sony's upcoming PlayStation event, where it's expected to unveil its upgraded PlayStation 4 console, is set for September 7th, but it seems like the expected reveal wouldn't be much surprising for those who are reading this post right now. Of course, we don’t know if this alleged PlayStation 4 Slim console is legit, but the unboxed images that were provided by the seller to Polygon make it look quite real.

The console is quite slim and sleek, with rounded edges, unlike those of the currently available standard console that have squared-off edges. Images of the box indicate that this PlayStation 4 slim console has probably originated from Europe or Arabic regions. There is, however, nothing written on the box that refers to this being a new, slim variant of Sony’s game console. There are no details regarding the hardware, so we can’t say if this is just a slimmer version of the console, or the highly anticipated more powerful version of PlayStation 4, codenamed PlayStation Neo. The model number is not clearly visible, but if I am not wrong, it is 'CUH-2016A.'

Of course, this could very well be an elaborate fake (I think it sure is, why'd the model number be 2016A?, and the 3rd image in the gallery; check it out closely), and if it is, it won’t be the first time someone has so skillfully used Photoshop to fool people; who could forget that fake Nintendo NX controller that turned a lot of heads. If this is real, though, then it means Sony may have misplaced a shipment. It won’t take more than month for us to know the truth. Sony’s PlayStation event is being held on September 7th.

Keep checking back here to find more on this story.