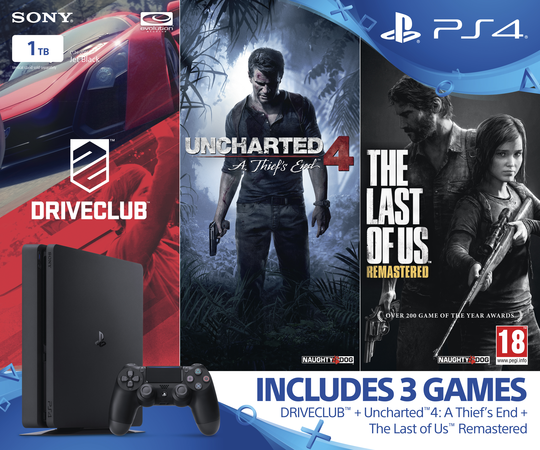 The pack includes the new 1TB PlayStation 4 Slim and physical copies of Uncharted 4, The Last of Us Remastered, and Driveclub. We’ve only encountered this specific bundle in the UK and is also listed on Amazon UK via various retailers. Normally, prices range from £285 to £319 so the deal is quite lucrative.

What’s in the box?

PlayStation®4 - Play. Redesigned.
Britain’s bestselling console has a brand-new look.
Experience epic adventures, battle the best players online and challenge your friends in your living room with the slimmer and lighter new PS4™.

Sony released its toned down version of the PS4 back in September of this year.

Our engineering and design teams collaborated to consolidate PS4’s high-performance technology into a smaller, more energy efficient form factor. When comparing the new PS4 model to the current model, we’ve reduced volume by 30 percent, weight by 16 percent, and power consumption by 28 percent. Despite the sleek design, the new model packs all of the same powerful components that have made PS4 the best place to play.

The Last of Us Remastered, Driveclub, and Uncharted 4 are all PS4 exclusive AAA titles, with Uncharted 4: A Thief’s End being the most recent title in the pack.

Those in the UK looking for a great PS4 Slim console deal should look no further.