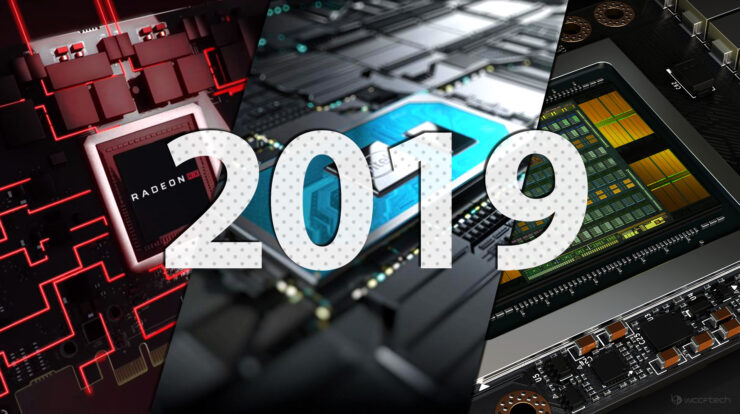 The year 2019 is finally over and it has been either a great year for gamers or a horrible one - depending on who you ask. Both AMD and NVIDIA launched new (major) products. Intel was somewhat absent this year and only managed to squeeze out a new mobility architecture (best of luck to them for 2020) on the 10nm process.

PC hardware: All the latest and greatest releases of 2019

It has been an absolutely great year for AMD with the company achieving breakout success with its Zen 2 launch. While Zen was considered to be an *almost as good* alternative to Intel's processors, Zen 2 is on par with Intel's greatest and actually beats it in specific benchmarks. At the same time, while Intel processors are getting security vulnerabilities discovered every day (and applying mitigations for these slows them down), AMD processors are having a relatively smooth cruise. From a value proposition perspective, AMD's Zen 2-based processors are now in the disruptive stage of their life cycle, taking the company from a $3 company to a $40 behemoth.

While most enthusiasts would know Zen 2 through the launched Ryzen 3000 desktop processors, EPYC is where this microarchitecture made the biggest splash. Fixing AMD's HPC weakness that was present in Zen, it has singlehandedly made AMD the most competitive x86 company on the planet and took Intel by surprise. Zen 2 also forced Intel to hand out price cuts in its lineup and more are expected to follow as Intel transitions to 10nm in 2020. Zen 2 has been an absolute success story for the company and going forward in 2020, we expect Zen 3 to be even better.

While AMD's CPU side has been killing it, the GPU side has taken a slow-burn approach to things. The company's 7nm based Navi GPU offers great performance for an affordable price point and has helped the company a lot in terms of finances (7nm is great economies of scale and is much cheaper to manufacture than 14/16nm parts). Unfortunately, however, we did not see Big Navi this year, which is in line with our exclusive published almost two years ago, and leaks would tell us we might catch a glimpse before 2020 is up. So Big Navi parts are another aspect to look forward to from AMD in 2020.

NVIDIA's Turing/SUPER GPUs were initially debuted in late 2018 with the flagship part but it wasn't until 2019 that we saw a drastic reduction in premium and the advent of the SUPER series (as well as the RTX 2060 etc). NVIDIA's Turing GPUs were meant to be a revolution in the industry of GPUs with their raytracing techniques and while that didn't happen - the launch did kick start a very slow but steady burn in the industry to support raytracing at a hardware level (any Turing complete machine can run raytracing on a software level).

The company also launched NVIDIA's non-RTX Turing cards like the GTX 1650 in 2019 and these were the ones that would go on to become the company's bread and butter graphics. NVIDIA has been one of the most consistent companies in terms of product launches and we have no doubt that 2020 is going to be even greater with the upcoming launch of the rumored Ampere GPUs.

Intel is the only company on our list which would probably want to forget 2019 ever happened. The company faced a tough time with rising competition from AMD, security vulnerabilities being discovered and its 10nm process getting delayed to 2020 (while the company has technically launched Ice Lake 10th Gen processors, desktop parts won't land till 2020). The only major launch of the company was the introduction of its Ice Lake processors on the mobility side in late 2019.

Considering the fact Intel has already claimed the 10nm mobility milestone with CNL mobility processors (which were then EOL-ed) that did not ship in volume, this is not something that caused a lot of hue and cry. The major excitement coming from the Intel camp has to do with its Xe graphics efforts which are expected to bear their first fruit in 2020. We also expect the company to (finally) transition to the 10nm node in mid-2020 and roll out Ice Lake on the desktop side of things as well.

So what was your favorite launch of 2019? and if we missed anything, be sure to let us know in the comment section!