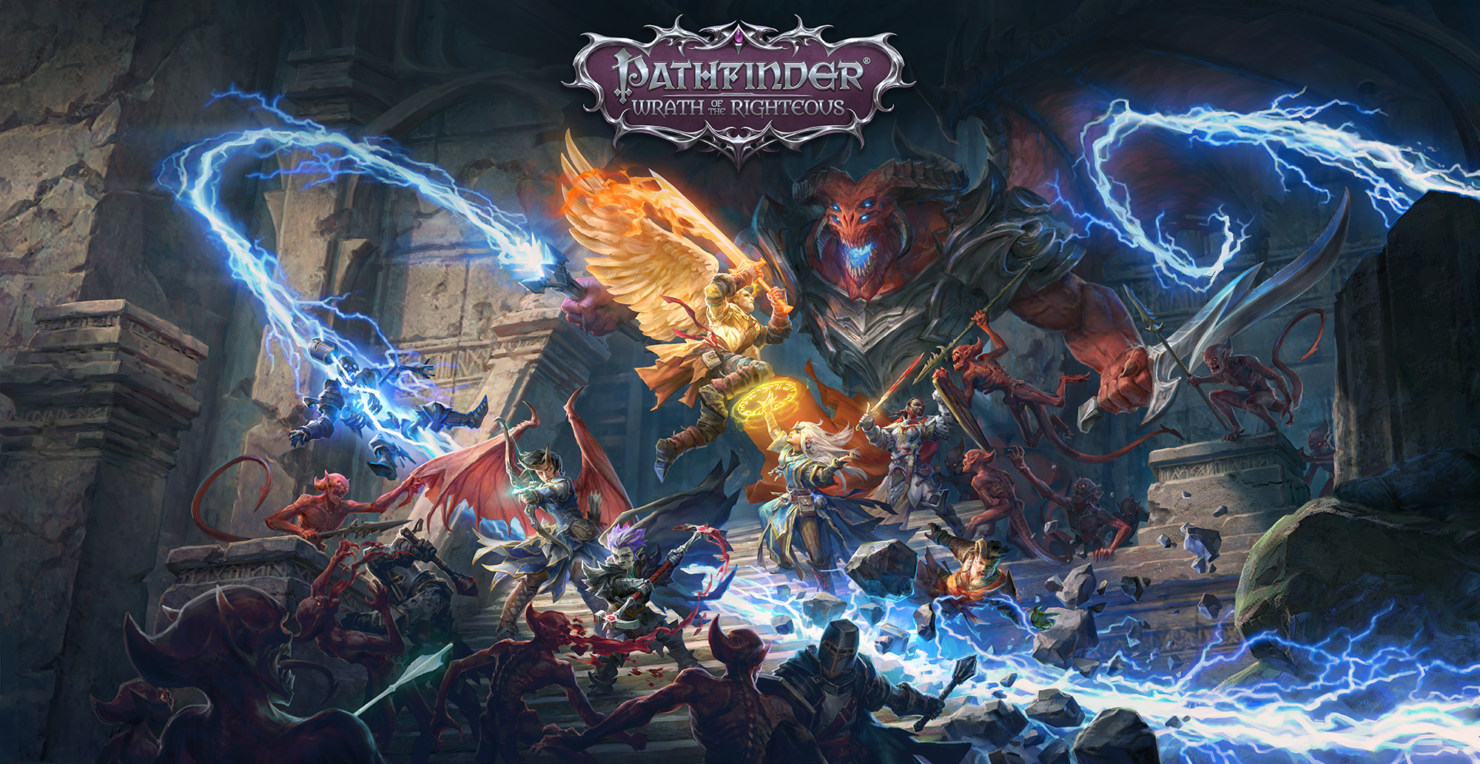 During PAX East 2020, we caught up with Owlcat Games to get an in-depth look at the next title from the studio, Pathfinder: Wrath of the Righteous. This follow-up to 2018's Pathfinder: Kingmaker is currently undergoing a crowdfunded Kickstarter campaign. With four days left to go, the campaign has already surpassed its $300,000 goal fivefold by hitting the $1,600,000 mark shortly after PAX East 2020 wrapped up, unlocking stretch goals such as mounted combat, dismemberment, increased world reactivity, more varied animations and of course extra classes and races.

To discuss Owlcat Games' next Pathfinder entry, we spoke with Alexander Mishulin, the Creative Director for both Pathfinder: Wrath of the Righteous as well as the previous entry, Kingmaker.

Fans have been talking about Baldur's Gate 3 here at the show, but that title is going exclusively turn-based. How do you feel that some Baldur's Gate fans are now saying that Pathfinder is the true successor since it features realtime with pause combat?

That's a difficult one. I actually enjoyed the footage for Baldur's Gate 3 and never had the chance to experience it on the floor. Our entire team is going to play that, I know for sure. When Larian announced that, it was like 'oh, they're doing Baldur's Gate 3' and we'll be playing that. But when you're making a game, eventually you see some things you could do better and it prevents you a little bit from enjoying your own creation.

Aside from that, I think there are places for many great RPGs on the market. Now, when I finish the latest one, usually there's a gap and then I'm going back to the games I liked and replay something before the next game on the market arrives. It's not like a shortage, but there is still a place for many different RPGs. Because of that, I think that there are a lot of people who love the genre and should play our game and should play Baldur's Gate 3 and any other great experience that is released on the market.

Why did Pathfinder: Kingmaker never make its way to consoles?

Actually, we are making a console version. We didn't announce a release date yet, but it is in the works and I hope you will be able to enjoy it on consoles. We'll see how it goes from there, but [Pathfinder:] Wrath of the Righteous is PC-only at this time.

If Pathfinder: Kingmaker is successful on consoles or if players enjoy using the controller with it, do you think there is a possibility of porting Wrath of the Righteous as well?

Usually, I'm told that I have to say that we will not confirm or deny anything. Logically speaking, if Pathfinder: Kingmaker performs great, we will be thinking about going that way, but right now we're focused on the PC experience.

Has Owlcat Games been thinking about adding multiplayer in some way?

Will you officially support modding, like Steam Workshop capabilities, for Pathfinder: Wrath of the Righteous?

Yes, we reached a social goal on Kickstarter to officially support modding. I will not say a direct listing workshop because our programmers will still work with how we will approach that. It's a high percent chance of doing Steam Workshop but they didn't give me information that we are really sure of that we'll do [Steam Workshop] so I cannot promise it. But yes, there will be some kind of mod support.

Damien Sarrazin, PR: If I may just interject here for one second, I don't know if you talked about the turn-based mode yet. That feature was actually stemmed from a mod, right? From the community?

Yes, the turn-based mode. Our community made a great mod for Pathfinder: Kingmaker. It allowed playing the game turn-based with some additional rules concerning movement. Even up close, that was a tabletop experience. It got big traction in the community and a lot of people enjoyed us. It showed us our game from a different perspective and we saw that if people enjoy it, we should include it in our next game. So, in Wrath of the Righteous, there will be a turn-based mode that you can turn on and off. We have some people that enjoy playing everything turn-based, some people enjoy playing areas in real time, and sometimes we want to have a greater degree of control. You can go turn-based, for example in a boss battle, and give more precise orders if you want to.

In terms of numbers [for damage and abilities], they're still made for real time with pause. We're not changing them because we're still making those numbers based on the tabletop RPG, so they shouldn't be changing between real time and turn-based. It's up to you to decide [how to play].

Will the console versions of Pathfinder: Kingmaker have that turn-based mode?

I cannot say anything about that.

In your opinion, what do you think about the next generation of consoles?

I would definitely get those. I set aside a hefty sum of money for that. I really like the fast loading times. For example, I played Marvel's Spider-Man, it's a great game, but eventually when hopping between the regions, I was getting tired of [riding] the metro. I don't expect a great difference in terms of graphics because when Microsoft was presenting the newest Xbox and newest Halo, I actually caught myself thinking that I personally don't see a difference now. For our artists, there is a great difference, but not for me.

I kind of expect the games going the same route they're going right now with consoles. For some time, for a couple of years, while people learn how to make the best out of the consoles, we'll still be playing a mix of the generations and games will be very similar, but then somebody will do something really insane. We'll see.

Can you talk about the degree of involvement with Chris Avellone on Pathfinder: Wrath of the Righteous?

Yes, we're happy to work with Chris on another project. He's a big fan of the Pathfinder universe. He is helping us with the main storyline. He's writing one of the companions. His role is pretty much the same as the first game.

Looking at the alignment system in Pathfinder: Wrath of the Righteous, how dynamic is it? How much will your alignment change during gameplay?

It will be a little bit different from Pathfinder: Kingmaker. In Kingmaker, you could shift your alignment from, for example, being good to being evil and back to being good throughout the game without the use of spells like Atonement.

In Wrath of the Righteous, it will be less dynamic. Part of that is because of the Mythic paths. If you're going down a mythic path, there are some quests involved that support the behavior of a chosen path. Say you want to become a Lich. To do that, you're going through several tasks and most of them require some evil actions. Becoming undead and preparing a ritual -  probably there are some things that are not really good. It will pull your alignment towards becoming evil. The same goes for Angel and others that will be pulling you towards good, or different spectrums of good. Because of that pull, we expect that most of the players will gravitate into the alignment of a particular mythic path. There are some options within it as well, but it will be less common than in Pathfinder: Kingmaker.

That was one thing I was curious about. If you're going down the path of Lich, will there still be partially good options later on or if those options are locked out.

I would say you definitely can remain neutral but it's a lot of effort, of course, because you'll be pulled towards evil. You probably won't be able to remain good. We will see. Wrath of the Righteous is still in development and a lot of things fluctuate.

Did you have an early access period for Pathfinder: Kingmaker?

We had alpha and beta versions available for our backers at different types of pledges. We are going the same route here.

Are you going to support multi-classing in Pathfinder: Wrath of the Righteous?

Yeah, all the way. One of the greatest features of Pathfinder is that you're able to multi-class easily and create very interesting and insane builds. One of our players shared with us a build with six different classes and that's enormously powerful. In Kingmaker, there is a third DLC which is an endless dungeon and a lot of players who enjoy playing with mechanics and creating different characters are enjoying it. It's like a test ground for different builds and party compositions. Sometimes they do really insane stuff.

Do you have a level cap in mind?