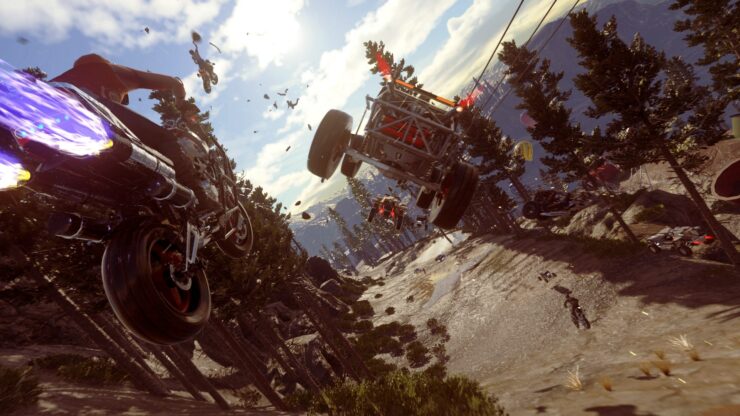 The last console generation felt like the peak of the arcade racer games, with titles like Burnout Paradise (recently remastered for current generation hardware) and the MotorStorm series setting a new standard for the genre. As someone that isn’t very good at ‘proper’ racing games but still enjoys arcade racers, I feel like we’ve been starved of a decent arcade racer for far too long. Back in 2016, Sony closed down Evolution Studios (the developers of the MotorStorm series), Codemasters snapped up the developers almost instantly. It hasn’t even been two years and already the developers are ready to show off their latest game: ONRUSH. Last week, I had the chance to check out the game for a few hours in both the single player and multiplayer modes as well as interviewing the Game Director.

One thing that a lot of people tend to resent (and quite rightly so) in multiplayer games are the oft-lengthy respawn times. Thankfully Codemasters has recognized this and built ONRUSH around the notion of cutting out boring respawn downtime and jumping straight into the action. Labeled as the ‘Stampede System’, this means that you’ll be traveling around as a pack, rather than simply battling it out for a first place finish. Thanks to the quick respawns, players will also be launched back into the game at 100mph close to the pack after being taken out. As a result, there’s minimal time wasted on trying to build up speed to catch up with others, and far more of a focus on action. Similarly to other racing games, ONRUSH integrates a boost system in which you build a bar in order to increase the speed of your vehicle for short periods of time. However, Codemasters has added another layer to this common mechanic. Taking inspiration from the Ultimates and Supers that you see in games like Overwatch and Street Fighter, each vehicle can enter a unique ‘rush’ mode that lasts for ten seconds. Carefully timing your rush can aid your team, take out multiple opponents or potentially even alter the outcome of the match in the final seconds of the round, depending on which class you choose. 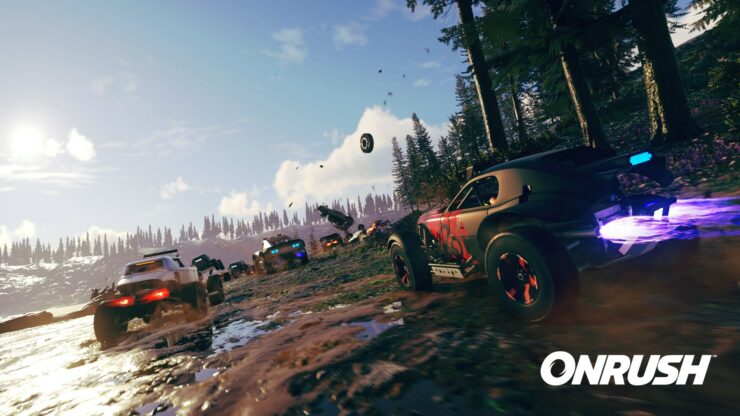 ONRUSH has eight classes, including two motorbikes, each fitted with their own unique abilities and loadouts. While rushing, the Blade class will leave a burning trail in its wake, setting fire to anyone that happens to be coasting along behind it. The Outlaw class can slam the ground to release a devastating shockwave and can also steal boost from other players whilst rushing. If you enjoy performing stylish jumps, the Vortex class is probably for you, as it gives an advantage for timing your boost when attempting to land flashy moves. In keeping with its name, this class also leaves a tunnel of destructive turbulence behind it to keep the opposition at bay. The Charger is an aggressive class that can attack foes in the air with a well-timed boost and can simply plow over enemies on the track when rushing. If combos are your thing, the Interceptor is most likely your class of choice. With a super-charged initial burst to your boost, this class can chain together takedowns in order to lengthen your rush. There’s even a couple of support classes to encourage you to work with your teammates. Dynamo enables you to supply your teammates with boosts and can actually provide unlimited boost whilst rushing. The Titan class has the ability to shield nearby teammates and while rushing also leaves a trail of obstacles to slow down opponents. Finally, the Enforcer can block opponents from boosting altogether and can blind members of the opposing team, if they happen to get caught behind them.

Along with a set of unique classes, ONRUSH has also tweaked its modes to fit its brand new style of racing. Spanning twelve tracks that change dynamically during the race, we can expect to see day/night, fog, sunshine, snow and rain variations. Overdrive will display a freeform style of play that many people will be familiar with. However, with the added rush mechanic, Codemasters is flipping this classic arcade style of point scoring on its head to create an action-heavy racing experience. Staying alive and taking out enemies is still the main objective but skill and strategically planned rushes will ultimately win you the round. While at the preview event, I had the chance to test out Countdown mode, a race against the clock, where you battle to reach the next checkpoint to score extra time for your team. This frantic mode was fun to play and before long, it was easy to see when I should use my rush. Switch takes the place of the classic elimination mode you often see in arcade racers, instead replacing it with the Gun Game mode that you’d see in a game like Call of Duty. Here players start on the same level with a motorbike, battling for three lives. Taking out other vehicles will bump you up to the next class and you’ll continue to work your way up. Of course, King of the Hill also makes an appearance in the form of the Lockdown mode. Zooming around at 100mph, players will have to chase a moving zone before fighting to capture it to score points for their team. Although I didn’t get a chance to try this particular mode, I’m interested to see how these crazy speeds improve a popular mode. 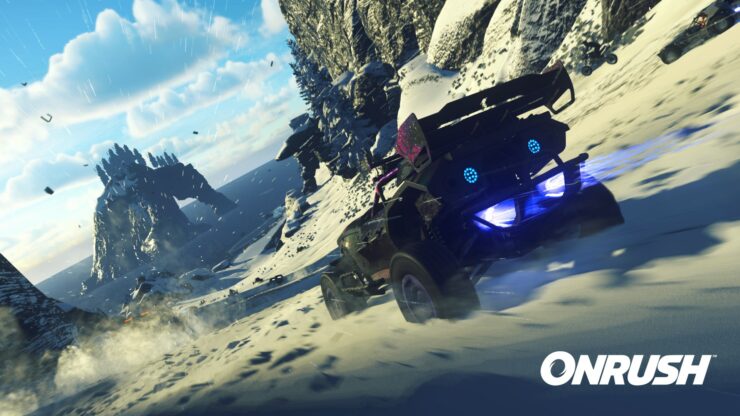 ONRUSH will feature a campaign that can be played solo, or six-player co-op if you feel like jumping in with a group of friends. From what I’ve seen so far, the solo campaign looks as though it’ll be an incredibly thorough tutorial (around ninety matches) of how to handle every class, mode and track in the game - which is exactly what you’d want. With regards to the online modes, it's refreshing to see a game that manages to juggle players of different skill levels and ensure that everyone plays a part in each match. With the short respawns, there’s little time to get bored and to top it off, Codemasters has even given players the options to join events that have already started, essentially cutting down the waiting time that you’d usually spend in a lobby. Adding a Quickplay mode for casuals and a structured Rank Season for higher levels of competition, there really is something for everyone here.

Up until this preview event, there wasn’t any information online regarding enhancements to ONRUSH when playing on an Xbox One X or PlayStation 4 Pro. We are happy to confirm ONRUSH does utilize the power of these consoles to provide either a 60FPS or 4K experience. Unfortunately, it is not possible to have both 4K 60FPS, but when you look at the visuals of the game that shouldn’t be too much of a surprise. Judging the two console versions side by side, the Xbox One X version manages to maintain a higher frame rate while also looking better visually. For those of you who don’t own the latest generation of consoles, a PC version of ONRUSH is coming at a later date so you’ve got that to look forward to.

After so many years without a great arcade racer, Codemasters is bringing something new to the table with ONRUSH. The sheer speed of the game, coupled with the tactical cooperative gameplay and short downtime after crashes gives you that constant feeling of wanting just one more game with your friends. To make things just that much sweeter, Codemasters has revealed plans to bring out free content and balance patches based on community feedback. The wait for ONRUSH isn’t long at all as the game is scheduled to release on June 5th, 2018 for the PlayStation 4 and Xbox One, with pre-orders already open via Amazon.

If you cannot wait to get your hands on the game, you’ll be happy to know there is an open beta coming in May for both consoles.