ONRUSH Interview – An Arcade Racing Game Influenced by Fighters; No Microtransactions at Launch 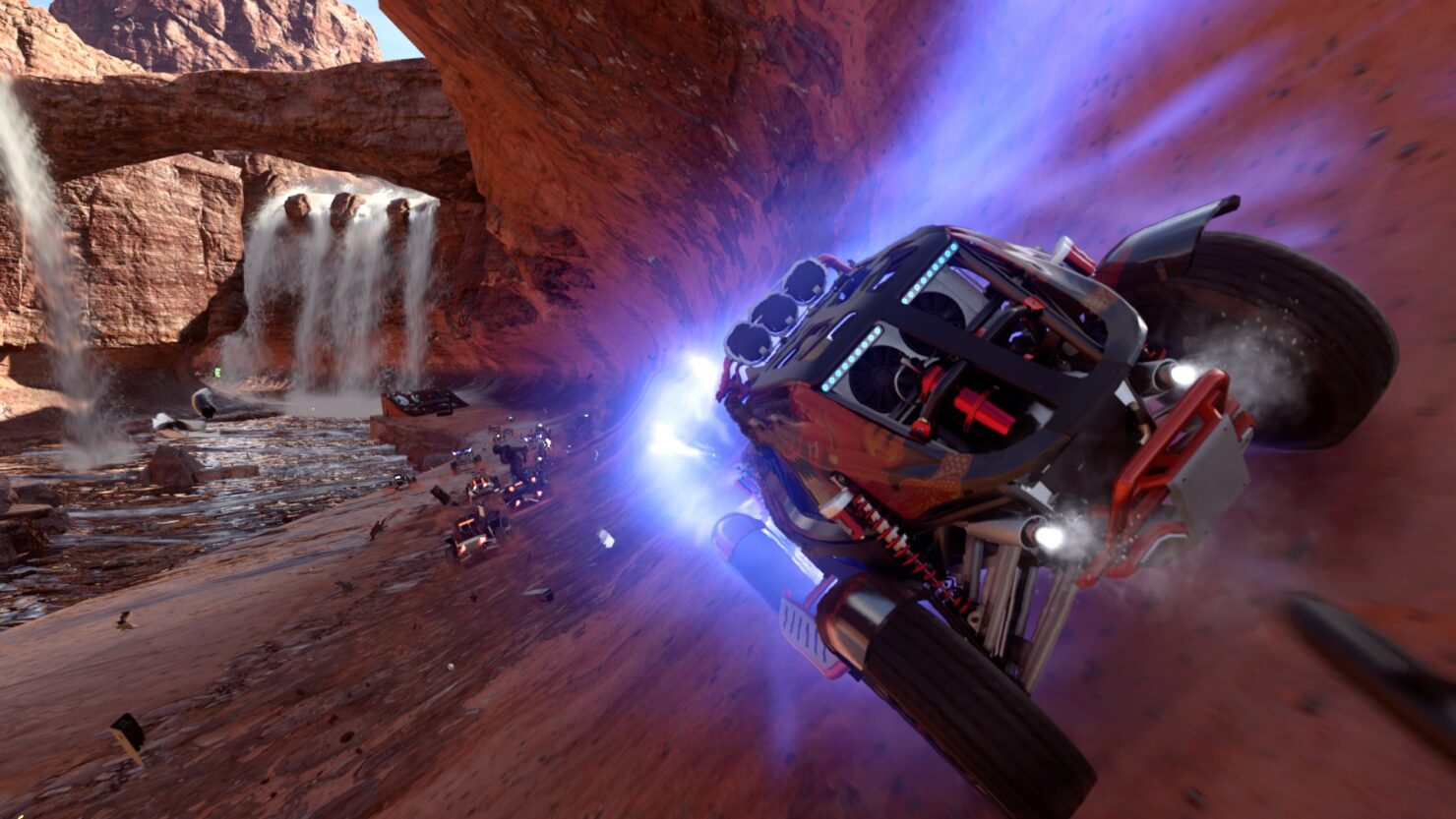 Last week I had the chance to check out ONRUSH, Codemasters’ new arcade racing game. Created by the team that worked on DRIVECLUB and MotorStorm at Evolution, ONRUSH takes high-speed racing to a whole new level, cutting out lengthy respawn times and focusing on keeping players amongst the action at all times. Be sure to check out our ONRUSH preview.

I had the opportunity to speak to Paul Rustchynsky, ONRUSH’s Game Director. Read on to find out which games played a part in influencing the development of ONRUSH, how competitive ranked play will work and which enhancements we can expect to see on the PlayStation 4 Pro and Xbox One X. By the way, ONRUSH is scheduled to release on 5 June 2018 on PlayStation 4 and Xbox One. Codemasters has also confirmed that a PC version will launch at a later date.

Can I get you to introduce yourself and tell us a bit about your game, please?

ONRUSH is a new breed of racing game that focuses on the fun by keeping you in the thick of the action. Taking everything you love from classic arcade racers and then mashing up it with the best from other genres.

ONRUSH ticks a lot of the boxes for the things that I’ve been wanting to see in Arcade Racing games for a while now. How did working on games like DRIVECLUB and MotorStorm influence your decisions when developing ONRUSH?

The studio has a vast experience of working on racing games over the past 19 years, and every single title we’ve worked on has influenced what we’ve done with ONRUSH in some way or another. Obviously, MotorStorm was a big influence from our past catalog – but some of the things we did with DRIVECLUB, such as the snappy load times, the pick and play controls, through to our ideas for how we’re going to support the game after release have all helped make ONRUSH a better game.

You mentioned the Street Fighter series as being an influence for ONRUSH. Can you go into a bit of detail as to what you meant by that?

We’ve been influenced by a wide range of titles outside of racing. Specifically, the fighting genre has influenced ONRUSH, with their fast flowing rounds that seamlessly roll into the next one and give players the opportunity for a comeback if their first round didn’t go so well. This makes every round important, and it generally means you’re battling all the way until the dying moment of a match.

ONRUSH ensures that people of all skill levels can play together and not feel out of their depth - everyone has a part to play in the team. What kind of differences can we expect to see between casual play and competitive ranked play in terms of skill level? (For example, in Overwatch, you can clearly notice the differences between a Silver-ranked Soldier 76 and a Platinum one - how will you determine the ranks in ONRUSH?)

In casual play, we’re only expecting a light level of team-play and coordination needed for players to be able to have fun and compete at a decent level. With Ranked, however, to be the best you’ll need tactics for the mode, the track and the line-up of vehicles that you use. You’ll also need reactive strategies to deal with other teams’ tactics, as well as the evolving gameplay that can see the dynamic weather impact your moment-to-moment choices.

As to the range of ranks featured in the game, we’ll be showcasing those nearer to launch.

You’ve mentioned that you’ll be adding free content updates in the future. What kinds of things are you hoping to add to ONRUSH?

We’ve designed ONRUSH to offer fresh experiences, with free content and updates to keep the community growing around the game. So, you can expect additional gear to personalize your vehicles, characters, Tombstones and Crashtags. And of course, we’ve got some cool feature ideas in mind... but we’re not sharing those just yet!

The PC version of ONRUSH is scheduled to come out at a later date. Is there anything you can tell us about the game that hasn’t already been revealed (crossplay with PlayStation/Xbox, enhanced graphics etc.)?

With the PC version, we’ll be looking to make the most of the available hardware on offer! Providing you’ve got a powerful enough rig it should be the best-looking version of the game, plus it will have the sort of additional options that PC gamers are used to.

How did you try to revolutionize the arcade racer genre with ONRUSH?

The key question that we were trying to answer initially was, ‘how do we keep everyone in the action all of the time?’ And the answer was ‘the Stampede’, a system we’ve created that gets you into the action immediately, making the powerful and high-impact team-racing in ONRUSH easy to enjoy. Whenever you start the game, respawn after a crash or even if you fall too far behind the pack, the Stampede system launches you back into the middle of the action at 100mph.

It unlocks a new mentality and loads of new ways to play that reward you for chasing risks, racing with style and clashing with the pack.

The Xbox One X and PlayStation 4 are getting enhancements that allow players to pick between 4K and 60FPS. Is the 4K mode running at native resolution?

In these final few months of development our focus is on optimization and refinement, so we’re going to be pushing for the smoothest frame-rate and highest resolution possible in both modes. Only at launch will we be able to share the final details once they’re locked down.

With the Xbox One X being so much more powerful than the PlayStation 4 Pro, what differences can we expect in terms of performance between the two?

The Xbox One X will offer a higher pixel count and higher resolution textures to make the most of the additional power and resources available.

Do you have any plans to release a Switch version of the game in the future?

We’re big fans of the Nintendo Switch, but it’s not something we’ve investigated at this stage. Our focus right now is making sure everyone on Xbox One and PlayStation 4 have an awesome experience.

Are you planning on adding microtransactions to ONRUSH?

There will be no microtransactions at launch. We have a mechanic within the game that rewards players for winning, but these are purely cosmetic rewards. We are exploring the possibility of making these available to purchase at some stage in the future, but nothing is confirmed and it is worth underlining that this will never be a pay-to-win situation.