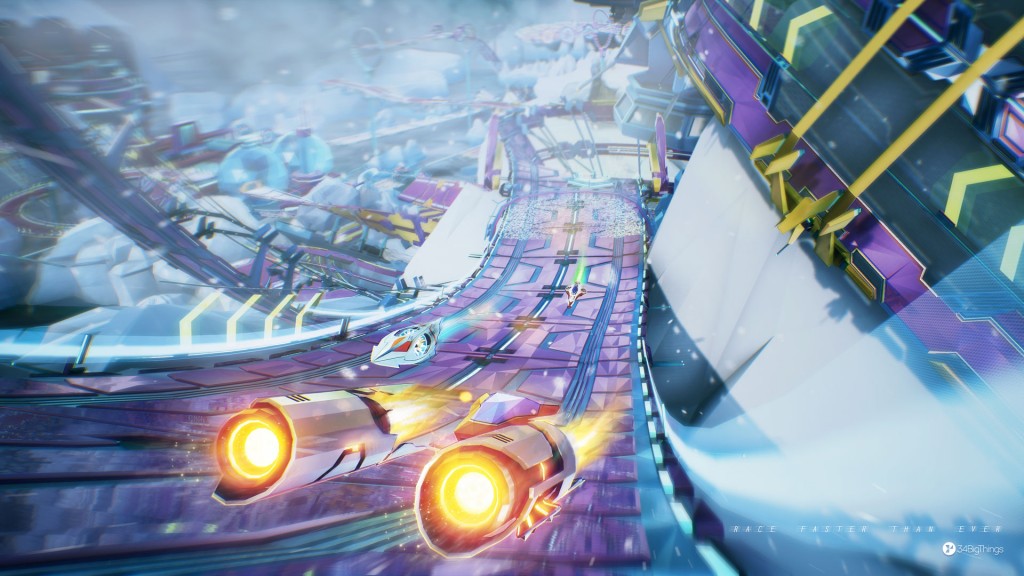 Gamescom is the best event for publishers to show big AAA titles to the public, but there are also plenty of smaller and less known teams that take advantage of it to show titles that can provide unique experiences that big publishers mostly ignore, or have simply forgotten. This is the case with Redout, a futuristic racing game developed by Italian team 34BigThings, which I had the chance to try out in Cologne while having a long nice chat with the team's CEO Valerio Di Donato.

Being fans of both F-Zero and WipeOut, we talked about how it's a shame that this type of racing game isn't getting the attention it deserves from big publishers. It might be due to limited demand, but Valerio feels like that there is a market for this type of game and, as such, they're hoping that Redout will do well. Development, however, didn't start just to provide a game to fill this gap,  but due to the passion he and his team share for futuristic racing games.

A few seconds after my hands-on session started, I realized how the passion 34BigThings has for the genre has allowed them to create a game that can compete with the most popular franchises of the past, maybe even surpass them in some ways. Playing Redout is an exhilarating experience: the game is blazingly fast and incredibly smooth, running at steady 60 FPS, with controls feeling natural after just a few moments. For my hands-on session, Valerio picked the slowest vehicle available, and the game was still incredibly fast, with my opponents leaving me behind to eat dust as I tried hard to keep up with them in a track filled with loops, tight turns and long straights which allowed my vehicle to reach its fastest possible speed. Despite my efforts, I ended up last, unfortunately, and the revelation that I was driving the slowest vehicle of the game made me realize that Redout is going to be a truly hardcore experience. All for the better: these speeds are not for the weak of heart. And even the few power-ups included in the game, which will provide performance boosts, will not change the basic fact that Redout will always be about individual racing skills.

One thing I did not expect to try was a VR mode. And I definitely didn't expect it to work so well. After getting me outfitted with a Razer OSVR headset and headphones, I was literally thrust inside the cockpit of my vehicle, trying to do better than in my earlier shameful performance. Almost surprisingly, I did much better in VR rather than in the regular mode, despite feeling a bit disoriented after each loop, so its inclusion is far from being a tacked on, last minute addition to get the VR crowd in. In the Gamescom demo there were a few technical issues in VR mode, such as some frame rate drops, but Valerio assured me that things would be smoothed out in time for release. With the game also coming to consoles sometime next year, Valerio confirmed to me that PlayStation VR support is in the cards, but apparently not at launch. As Redout is as enjoyable in VR mode as in the regular one, this is definitely great news.

Alongside these nicely crafted features, Redout will also feature plenty of content that will keep players busy for a very long time. The final release will include an extensive career mode, which will allow players to unlock even more content such as new teams, new tracks, for a total of 25, and nine game modes. As if all this wasn't enough, Redout will also feature a split-screen multiplayer mode as well as online multiplayer, and even more content will be coming after launch.

I have tried out a lot of games during Gamescom 2016, but few have impressed me as much as Redout did. The game oozes passion from every feature and it's a true joy to play, whether in regular or VR mode, thanks to very comfortable controls and incredibly smooth performance which makes players actually feel the true speed of each race. Redout launches this week, on September 2nd, on Steam so make sure to check it out if you're into futuristic racing games: Nintendo and Sony might be done with F-Zero and WipeOut, but 34BigThings is here to save this subgenre.